My Aim Is True 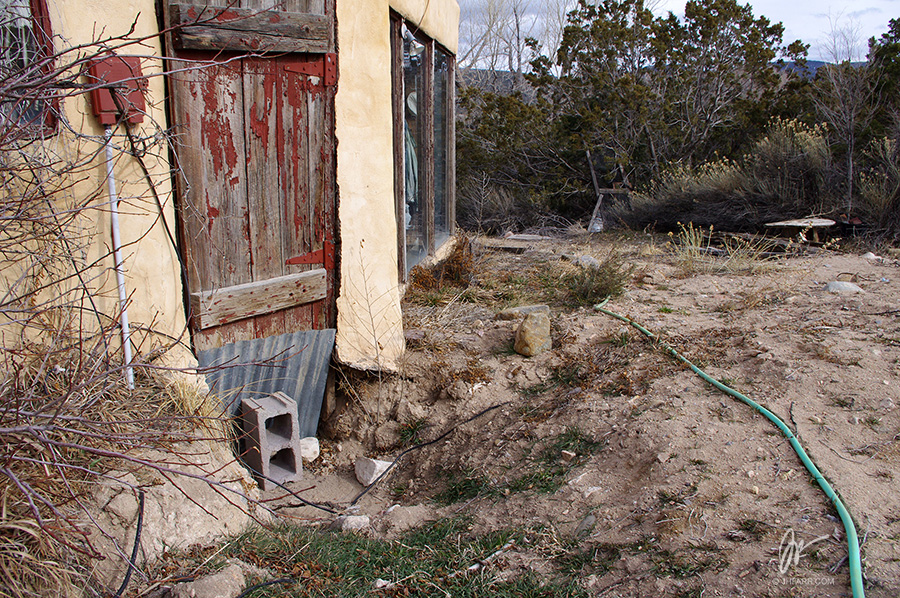 Don’t see any of this from our end

Now, this is familiar. At least it used to be, until the neighbors moved away. Ever since, the poor old outlaw Taos septic tank can sort of work, and my presence hasn’t been required. You’re looking at the back of our house with the dead landlord’s apartment. His hat and coat are still hanging on the clothes tree, dead plants sitting in the sun. (You can see them in the window.) The man’s been gone at least six years.

The septic tank itself is what the cinder block is resting on. The crude access lid is back inside the little “closet” with the old red door. Yes, the landlord built his studio apartment right on top of the tank. Well, half of it. The tank would often overflow, black water pooling there behind the door, and I could smell it in the summer. He used to get sick a lot, which I blamed on his smoking. Do tell. All in all, however, an erudite individual with a gentle soul—who lived over a semi-open septic tank, ye gods!

I’ve told this story many times with several variations. It’s a good one and New Mexico as hell. Maybe I should say as Taos as hell. That might be more fair. At any rate, this time I thought of it in the context of housing, if I can use that strong a term. What you put up with, what you find.

Earlier today I had a useless email exchange with one of those property agents who won’t tell you where the rental actually is, which to me is like the whole damn point. I’m a writer married to a classical pianist. What are we going to do, break all the windows? Pull up the flowers? So silly. It looked like a nice place, too, if only I knew where it was.

I get this all the time. It’s almost like I go out looking for it.

What we have here is a failure to communicate with the higher powers of the universe. I hate it when that happens.

Then the other day I remembered that I need some wheels and went to Craigslist. No boring 4X4s this time, no whiney-ass, can’t-get-out-of-its-own-way bullshit just because it’s practical, I wanted something fun. Something that would make me want to get in and go somewhere. And behold, delivered digitally to my waiting virtual arms was a late model Pontiac Firebird with a big V-8, leather upholstery, and only 79,000 miles on it! Varrroooom, squeal!

Yes, it even belonged to a little old retired couple down in Albuquerque, who were practically giving it away. It was perfect. I wanted to jump inside and drive to California.

No, of course I haven’t bought it.