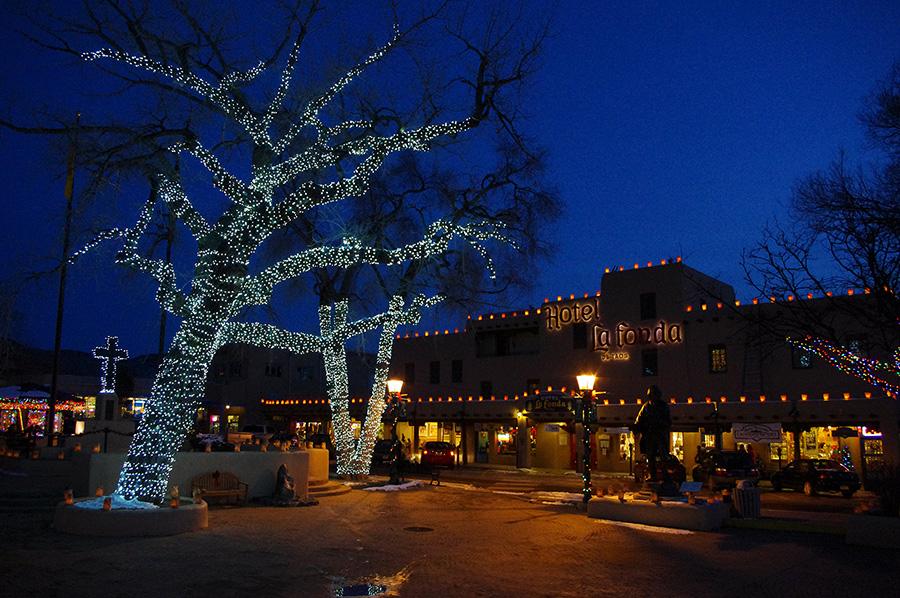 Taos Plaza the other night without a soul around

Even more editing, especially at the end. – JHF

Other than the truck, I don’t remember many details of the murder up in Questa sometime after we arrived in ’99. Not the sort of thing to savor, obviously. It happened just outside a bar. The perpetrator used his wheels to crush the victim, back and forth repeatedly, and may have shot him first. Along with the thugs who stomped the fingers of a young man to make him fall into the gorge, the three kids gunned down at what we call “the triple-murder Mustang,”* the mysterious fire that destroyed the brand-new mansion of an uppity newcomer, and more humorously, the well casing pulled out of the ground at the home of a transplanted city-slicker who tried to tell his Cerro neighbors how to run their village—and man, is there a whole lot more—this is how the shadow rolls in our el Norte. The darkness of the past is worse, yet pure Americana. Kick any pile of dirt and scatter bones. Much like anywhere, I guess, but easily discerned here.

While the marketing of the town and real estate shenanigans are transgressions of a milder sort—though harder to ignore for being in your face—much about Taos is expensive, dirty, cruel, and stupid, once more with the dark side in plain view. Any competent observer can find a motherlode of blasted hopes and irony to mine. Local cultural institutions are an easy target, too, all but irresistible sometimes. Where am I going with this, we wonder?

Well, I like this stuff. It helps me feel complete to know what makes the wheels go ’round, especially the things nobody talks about. Anything that’s buried and reveals itself, messages from the unconscious, unseen energies ike vipaka, “the result of past karma that we cannot change”—see here—manifesting as unhealthy thoughts. I learned about this just the other day and thought it made a lot of sense. (That first paragraph isn’t exactly wholesome, is it?)

Anyone who’s suffered from depression knows that thoughts can kill. After moving here from Maryland fifteen years ago, I become a kind of expert. This has to do with housing, making a living, and getting on with life. The transition was simply too abrupt. I never got over the shock of finding nothing half as good as what we had for less than three times the price, and then the dot-com boom went bust and I got walloped. This was way back when, remember. You couldn’t visit Realtor.com and look at houses. You saw the little photos in the paper and went on that, or maybe telephoned from far away and asked a lot of stupid questions.

As a result of that [vipaka], for much of our time here I’ve been living in two landscapes: the one in front of me with the ninety-mile views, and a shimmering golden one that never was, assembled from the pictures in my mind. The unhealthy thoughts were something like, “You stupid bastard, now you’ll never have another home and everything is ruined!” If you think that makes it harder to succeed, you’re warm, but keep on going. Creativity is bound to suffer. Aging brings on panic. Your ego scuttles like a cockroach underneath the stove.

Living in the mountains with a beautiful woman who loves you? Breathing all that clean air? Driving through spectacular vistas most Americans have never seen? Learning more about yourself, your partner, and the terrible beauty of the world than you had ever dreamed? Having the freedom to configure your own destiny?

Just yesterday I thought about the past and something shifted: I felt a different way of knowing it was really dead. A gift of grace, I think. For one long moment I keep trying to recall, I wasn’t under the lash. The wonder is, it only took me fifteen fucking years to feel this way. All the reasons and the rationales, all the dead bodies, all the money, all the losses we endured, they were what they were and could not be retrieved. In the wake of this experience, I had a sense of moving forward in an unencumbered way, as if the best were yet to come.

What’s a man to do if he no longer has to focus on the things he hates to gin up reasons to escape? For one thing, if I want to, then we can escape, lifestyle-wise or geographically or in the mind. It’s not the place, in other words (although that’s relevant), it’s me. Not you or them or her or it, just me. Fifteen years, you motherfuckers. Fifteen years, and here I am, ka-boom.

Watch the things you tell yourself.

Pay attention and be true.

* A nearby gas station mini-mart. You can still see the three descansos.