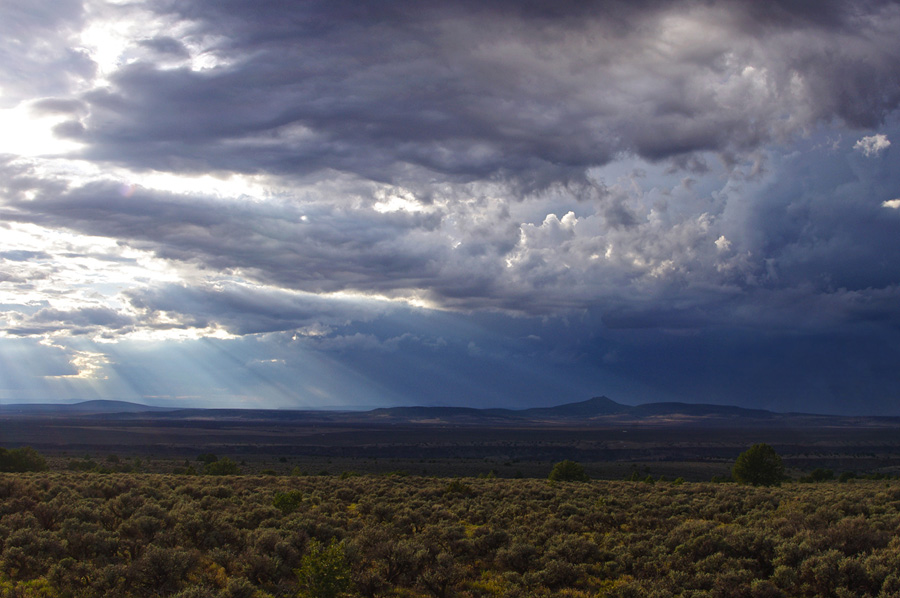 Taos Valley Overlook (of course) on a recent evening

No, we’re not exactly underwater here, although Albuquerque got hit with a monster storm the other day. But there hasn’t been a summer like this for a few years.

The way it works (when it does work) in the desert southwest is, humid air sweeps up from Mexico and we have thunderstorms in the afternoon or night almost every day for a number of weeks. This can happen with such regularity that long stretches go by without our being able to sit outside at cocktail hour, plus it gets cold for summer evenings, often 60 °F or below at this altitude. The rain is rarely heavy—there are exceptions with flash floods—but the air is still so dry, whatever falls chills things down via evaporative cooling. We often put on warmer clothes about the time the sun goes down, in any case. The thing is though, once the monsoons kick in, it’s almost never hot again that year. We’ll have some upper 90s in early June, and then that’s it. No mas.

The same so-called monsoon rains aren’t quite the same in hotter places such as Tucson. I’ll probably never be there again this time of year, or ever—but it will drop from say 110 °F to 95 and you’ll get sweaty and swat mosquitos while floods roar through the arroyos and over the roads. The latter is a hoot to witness, anyway. People stand out in the street and watch!

Usually it rains so seldom here—like almost never—that when it does, I have to remind my wife how to work the windshield wipers. (Now that’s dry.) Sometimes you see drivers going really slow because the road is wet. It’s like, “What the hell is this?” Also, their wipers probably don’t work because the rubber’s dry and cracked.

Finally, in case you’re wondering, most of the annual precipitation in el Norte comes as snow… Urk. Yes, that’s right. Last year I built my first fire of the season in late August. It can happen. I’m sitting here right now, in fact, on July 29, in long pants and sleeves with the front door open, and last night I had to close two of our three windows. These days you can tell the tourists from the locals pretty easily, because the former are the ones out in the morning wearing shorts.