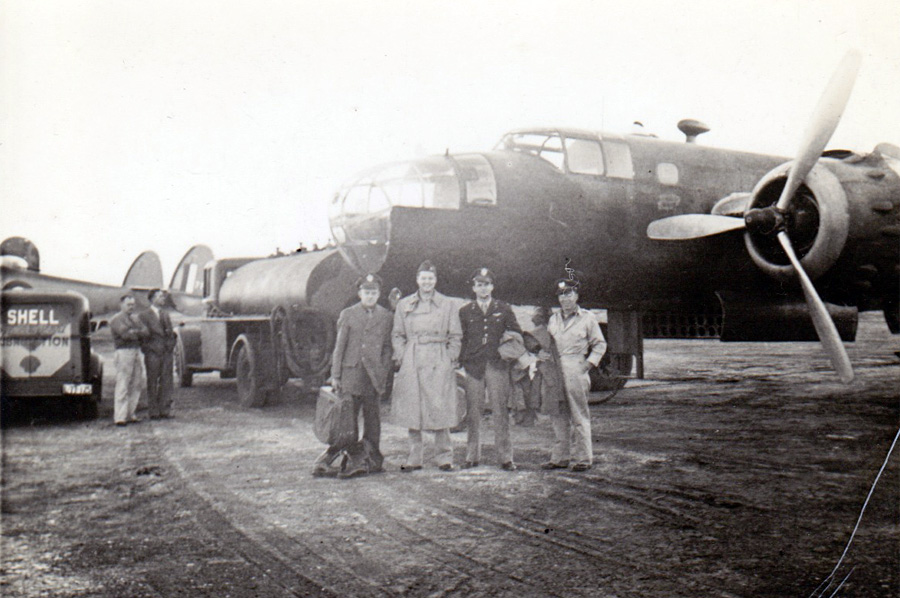 Dear God, do I love B-25s. All these WWII aircraft make my little heart go pitty-pat, because I lived and breathed this stuff from a very early age. Since this is another image from my late Aunt Mary’s WWII photos from the South Pacific, I’m going to guess that this is New South Wales, Australia like the last one. The markings on the aircraft in the background is one giveaway, as is the civilian Shell truck apparently gassing up the B-25.

So how do I know the men in the foreground are hitching a ride?* They’re dressed for travel, not for combat—though the one on the right may be wearing a flight suit—and that was how officers got from one place to another in those days. In a similar vein, my father was an Army Air Corps advanced flight instructor in Texas during WWII. A couple of times when he had time off to visit his parents in Maryland, he just, uh, borrowed a fighter plane… Grumman Wildcats both times, I think, not the AT-6 Texan trainers he usually flew. He never did see active combat, which must have grated on him something awful. Not because of misplaced guilt, but from knowing he was missing out on something huge. If that sounds strange, here’s an observation from the comments:

Most of those guys left America as a teenagers and became men over night. They lived knowing that they might not come back every day. Those that did saw things that would haunt them for life.

Judging from the annotated pictures in my aunt’s collection, for some young Americans overseas who didn’t get blown to bits or bored to death, World War II was probably the greatest thing that ever happened to them. No one talks about that much, but I see the signs in the photos of the men and women in that Hopkins unit my aunt served in: exotic locales thousands of miles away from home, meeting all those people you’d never see again—despite the horror and the tragedies, the excitement must have been tremendous. They partied hard when they weren’t dealing with the wounded and the dying, too. The “beach party” photos fairly reek with sex appeal. War may be hell, but there’s another side that tempts us.

* I actually don’t, of course. But see the comments for more on this.