Life on the Frontier 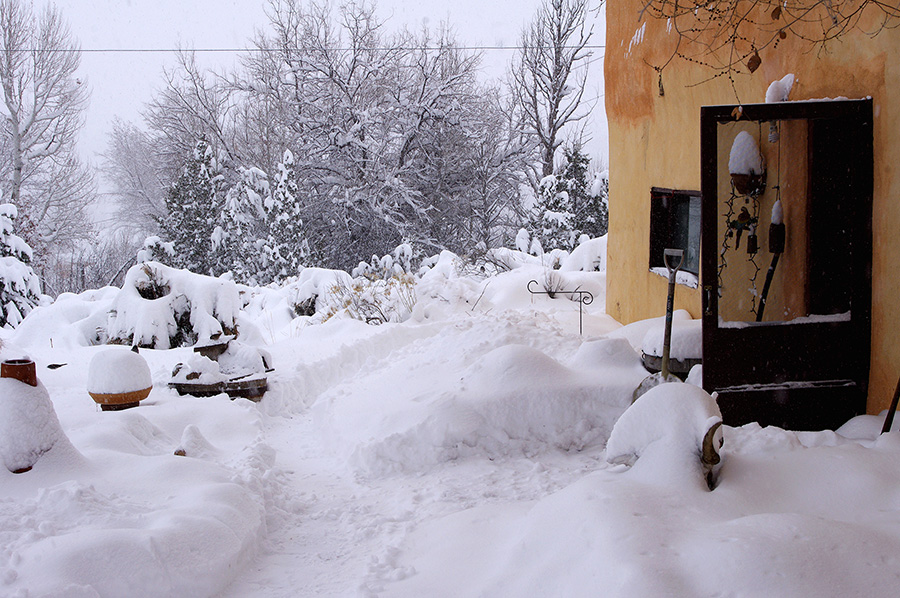 [Gulp] Even deeper since I took this shot! »Buy This Photo!«

The days and nights are all a-jumble with the snow. I don’t know where one stops and another one starts. When did it begin, last week? Feels like the stuff has been drifting down in tiny little flakes since I was born. It just keeps building. We woke up this morning to at least another six inches of fresh snow on top of what we already had.

Almost half a foot fell the night before as well. I do remember that. The next day my wife and I spent three hours shoveling snow so we could get the car out. She was unstoppable and insisted on shoveling the entire road as far as the community mailbox. I can’t call it work because I was having too much fun. Once the snow reaches a certain depth, I’m excavating instead of cleaning. The artist in me plans the paths and shapes the snow. When there isn’t any wind, like yesterday, I hardly notice the cold. It feels good just being outside in all that beauty. All the shoveling paid off, too. Later that afternoon, I was able to drive us to the bank. The roads were fine, and Taos was still there.

The thing is, though, that dealing with the snow is all you can do. I certainly haven’t been able to write, and my wife can’t get to her studio to pack or play the piano. Every day I have to dig the paths and uncover the wood pile, and other important things need taking care of. Today, for example, I went up on the roof for the first time in weeks, because water from melting snow was running down the kitchen wall and threatening to float the cat box. As charming as it is, this place is just as bio-degradable as any old adobe; it’s a feature, not a bug, unless you’re living in one at the time. Anyway, once up on the roof I realized I had to clear the snow from around the canales (roof drainspouts) if there was to be any hope of getting the meltwater off the roof. The snow was almost two feet deep, and I had lots to shovel. In the process, I discovered the snow had all but covered a sewer vent and the vent for the bathroom gas heater. If the latter were stopped up, we could go to sleep and never wake up, so it’s a good thing I climbed up there.

Overnight it snowed some more. Not enough to undo all the work I put in yesterday, but partly. We haven’t had the car on the road for two days now. My morning task is to clear the area around the car and do what I can to make the top of the driveway passable. When we did get out on Friday, our two hundred yard stretch of dirt road abandoned by the county was unbelievably bad: the holes are so large and deep, the car was on the verge of bottoming out. When two feet of snow decide to melt all at once over the next few days, we could well be stranded by the mud.

As a way of life, this simply will not do. Neither the spirit nor the body can withstand it. We absolutely have to move, like I’ve been saying for five years now. If old-time Taos winters are coming back, I’m not about to live out in the sagebrush, whether the county plows or not. To stay in Taos, we’ll need to find a home in town. Hitting the road is problematic and expensive, too. The thing I tend to forget is that our old farm house in the Maryland countryside required emergency attention every winter just like this place does. Maybe even more! Strong northeast winds would peel the siding off. Melting snow routinely flooded the basement and wrecked the screen porch. The balky oil furnace often failed to light just when the temperature fell and threatened all the pipes. But spring did come eventually, and not with snow and dust storms like it does here. The road was paved, too, and I miss that.

The weather is a factor no matter where you live, but everything about our life now seems so daunting. Recently someone told me that I’d already lived the “Taos dream” and didn’t have to any longer. I knew exactly what she meant. Living just beyond your means, savings slowly dwindle. The intensity of the highs and lows can break you, and if you stay too long, you end up stuck. I call this the Taos Trap™. The other day my wife said (not for the first time), “I’ve done Taos! I’m done!” No explanation needed, especially if you’ve been here long enough to understand the history and sociology.

I honestly don’t know how to stay or where to go. In my confusion, I tend to try too hard and miss the obvious, like trusting in the flow of life. The road to just a little bit of ease, if not to Easy Street itself, is surely right beneath my nose. The key thing here is calmness. Slow down, read the tea leaves, know that we are loved, appreciate the Now.