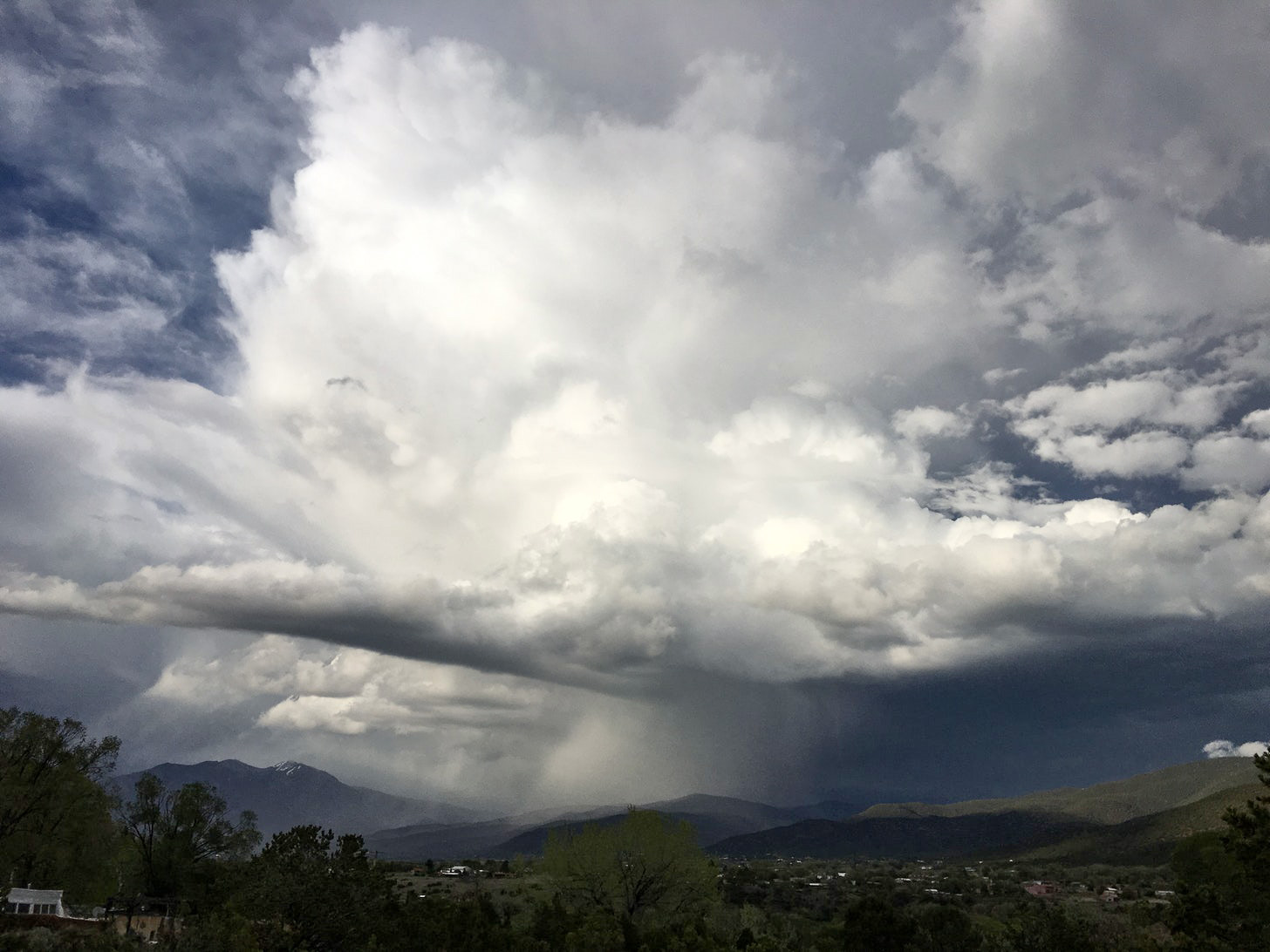 Another one from Goddamn Buffalo, you lucky readers!

There once was a weekly web column named “Grack” (see below). This one’s from November 17, 2003, which I can hardly believe. You can find it among the other pathos-soaked lovelies in my Taos Soul ebook. – JHF

Just before I saw the cloud, it happened again.

There I was, just standing on the mesa, waiting for the sunset, when all at once the moment somehow slipped inside my chest and gave my heart a slap. I’d gone halfway up the way I usually walk to try and catch the pink flash on the mountains when the light begins to fade, and now I had to cry. A rush of joy, release perhaps, as I yelled thank you to the wind.

The ground was sticky everywhere from melted snow, my boot soles caked with heavy clay. The wind was colder than I’d thought it would be, and I shivered inside my jacket. It was early still, but there was plenty to observe. As I waited, sniffling from the chill, a flock of several dozen juncos flitted silently through the sage and juniper no higher than my knees, a moving carpet of birds. Sunlight focused through the breaking clouds made changing patterns on the slopes. I was alone again in the middle of nowhere, standing in the mud and totally content. That’s when it hit me, see, the way it sometimes does. You’re in the moment, thinking nothing, and suddenly the world is perfect and no one is left out.

In Maryland I used to go out on the water in my kayak. The broad tidal river close to home was all but deserted along its upper length, at least for certain stretches. Thick woods gave way to marsh and sandy beach along the shore, and it was easy to pretend that I had traveled back in time before the settlers and profiteers had butchered Eden. Most often there was no one else around, no sounds except the wind and splash of water against the hull. Sometimes there were birds, and they made noise: herons squawking as they lifted off at my approach, seagulls crying overhead, geese honking in the fall. A couple times I saw foxes sneak quietly from the woods to take a drink, and once I had an afternoon that blew my mind.

It was one of those warm days in early fall before the cold sets in, when all the leaves are on the trees but changing, and there isn’t any wind. I was paddling by a marsh along a place called Possum Cove, at a wide bend in the river a couple hundred yards across. All at once I heard a distant barking, frantic yelping of the kind that told me dogs were on the chase. It was coming from the woods beyond the marsh, on the same side of the river where I was and headed in my direction, judging from the sound. Soon I heard the unmistakable noise of something crashing through the woods, then closer still, and suddenly three deer, two full-grown does and and a smaller yearling, burst frantically out onto the beach a stone’s throw right in front of me and dove straight into the river, followed all the way to the water’s edge by a couple of delirious yapping mongrel mutts!

I had never seen the like and sat there dumbfounded as the deer began to swim across, heading for a wooded bluff I doubted they would ever reach. All I could see were three brown heads bobbing perilously above the water, moving much too slowly, as far as I could tell. The dogs stood panting in the shallows with their tongues hanging out for hardly any time at all, then wheeled and ran off in pursuit of other game. It was all but over in an instant, or so it seemed, and quiet, like I’d dreamed the whole thing up, except for three little brown heads with floppy ears, far out in the middle of the river.

What happened next was a holy gift from God. Acting more out of instinct than anything else, I shook myself awake and started to paddle. The deer were quite some distance off by now, but I knew I had to reach them if I could. The current had carried them upstream a ways as well, but a couple of minutes of furious stroking brought me closer than I’d ever been to deer in the wild.

By now we were all maybe two thirds of the way across. The deer were in a tight formation, swimming steadily and looking scared. I thought their big black eyes took note of me as I moved alongside, but otherwise they kept their heading and paid me no mind, or so I thought. I was close enough to touch them with my paddle and could hear them breathing. Great gobs of foam and drool ran from their open mouths back across their necks. I feared they wouldn’t make it, but what could I do? Just then I noticed that the doe in front was curving gradually away from me and lengthening their course, so I relaxed and let them pull ahead. The animals immediately angled back across my bow and made for land as directly as they could.

With great relief I watched them stagger from the water on a little beach below the bluff, then clamber quickly up a wooded slope and disappear. I would have been on my knees, gasping in the mud, if I had managed to survive at all, I realized, half in shock. What power in those skinny legs, what life force in the heaving lungs.

Above the Taos valley, a final light was spreading out across the mountains. A cloud bank moving in behind me meant there’d be no magenta light show on the snowfields, but for now the vista was enough to make me linger. I moved a little to my left to get a better view, shifting my feet to what I hoped was drier ground. When I looked up again, there it was: a “mothership cloud,” so named by UFO aficionados for the shape they think conceals a giant starship. A moment later it moved away and melted out of sight. Just like I’d do if I were piloting the the thing, after having been discovered. It had to be a mass of water vapor shaped by wind, but then I thought the deer would drown. Who would know if something paddled out to meet us in midstream, rolling through a river of stars?

Some days I’m just glad to feel all right and not make judgements. When I got home, I knocked a pound of clay from off my boots and built a fire.

If I learn how to make this last, you’ll be the first to know. 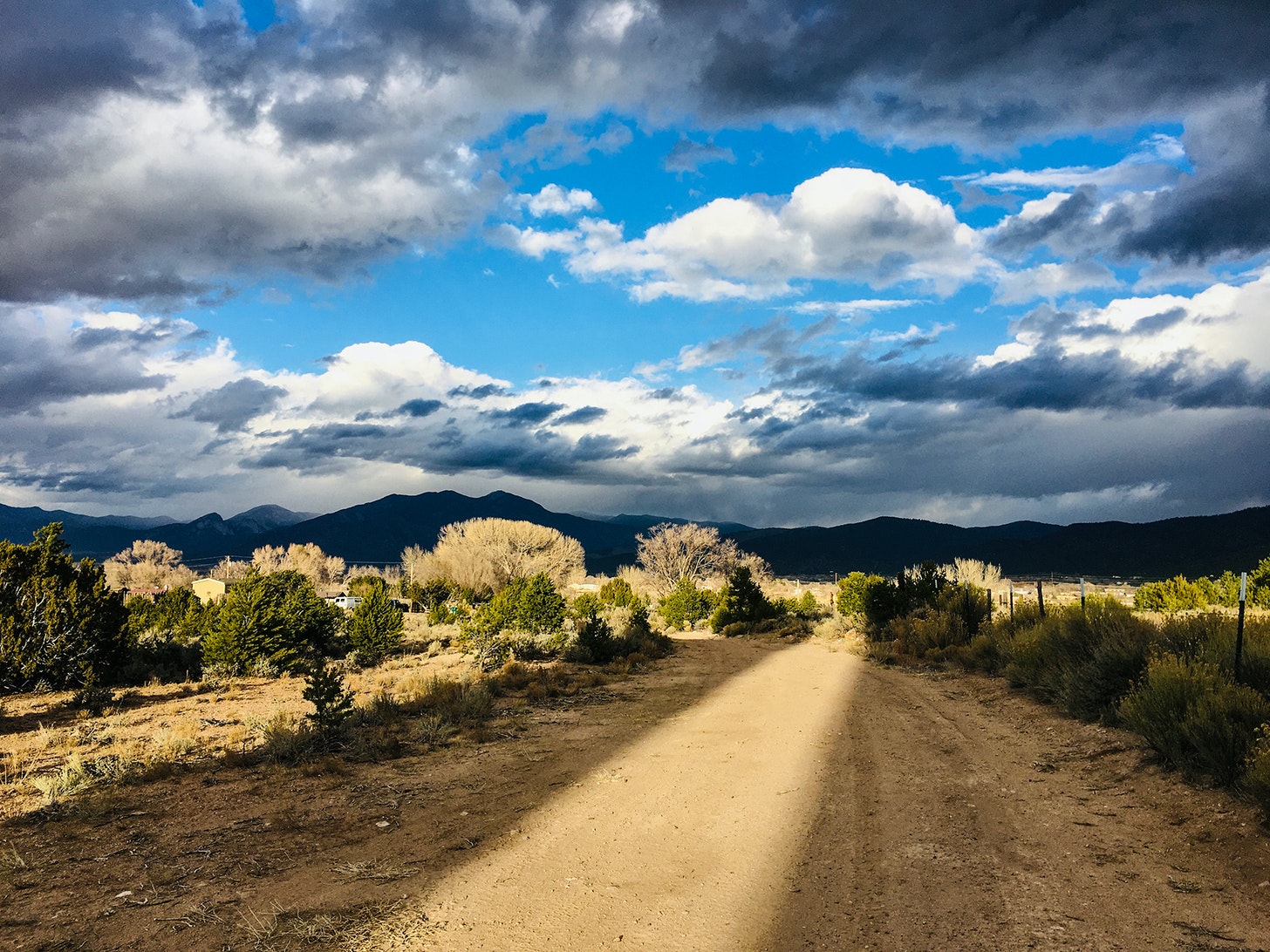