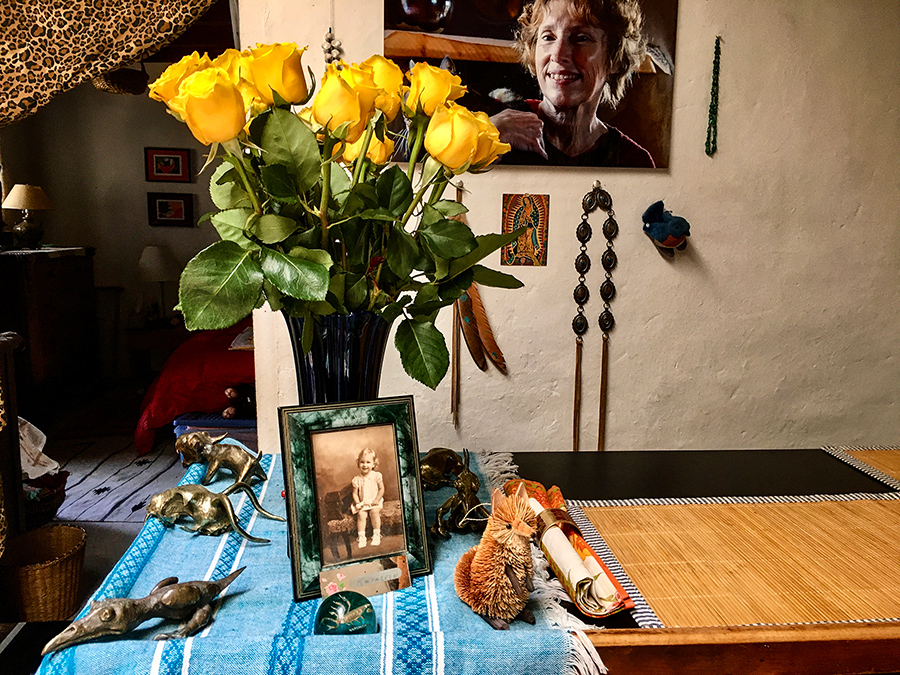 My time in the sea

The picture of Kathy as a little blonde girl comes from her studio. She kept it in a shrine-like setting like I have it now, on an old handmade table with a postcard of a naked young woman in a rustic French farmhouse. Bending over a sink, bare feet on the floor. We loved the image. A well-known one, I think, the dream of a feeling we had in a couple places we lived. I always knew Kathy was my own French farm girl, my English rose, cowgirl of the western plains. She touched all the bases. A creature of love, lit up from within. A butterfly.

Morning light shines through the back door above. I’ll never cut weeds or grass out there again. Haven’t once this season and I still get to the clothesline. The dead landlord’s poor hose sheds its skin like a snake from lying so long in the sun. I carried bucket after bucket to the tulips in the little garden ringed with stones but nothing bloomed this year.

My main concern now—would there were but one—is the fate of her Kawai RX-3 Professional Grand. I built a special page to advertise and sell it after waiting until I knew she’d approve. The clincher was that even if I had somewhere to put it, the piano is wasted on me. The way she loved and cherished it, the Kawai deserves someone who can give it real life again. Instruments owned by gifted musicians have a magical quality. Their spirit fuses with it, establishes a bond. The piano is lonely now, just like I am. Last week in a frenzy I bought classified ads, but who picks up a paper to find grand pianos? Then I got clever, looked up piano tuners to email, and something wonderful clicked. Maybe it was my web page or the obituary or the piano put out a signal. But that very same morning I had a reply from a top technician and tuner in Santa Fe with impeccable credentials who offered me a complimentary tuning…

I broke down at my desk and cried.

It wasn’t the money but the gesture. Like he was doing it for her. If she’d died back in Maryland, there’d have been so many old friends and colleagues to celebrate her life. Not so in Taos. I’ve felt badly about this as the time has dragged on. My sister and my brother visited, I’ve read tons of condolences from relatives, friends, and strangers, but in the physical, day-to-day sense there’s been only me—writing the obituary, seeing to the cremation, ordering a gravestone on the internet to have installed in Iowa, composing the inscription, corresponding, on and on and on. I’d been growing a shield against isolation and guilt and just never realized. The angel guy tuner in Santa Fe broke through. The piano is the keystone, see?

Once it’s sold, I’ll dismantle the studio and kill the rent. There’s almost as much furniture and Kathy collectibles in there as where I’m sitting. Even a second piano, her original upright, that I could switch out for the old loveseat as long as I’m here. That I would keep. I had lessons as a boy, my hands know the chords, I can sort of read music and might play again. She’d like that it stayed in the family.

The storage unit stuffed to the ceiling is a whole different thing. Tools, art, antiques, furniture, keepsakes. My grandmother’s china. My mother’s ashes, forgodssakes. I won’t give up the tall maple desk or the marble-topped vitrine or the paintings, so I’ll still need a house. Not this one, though. Whether I stay in Taos or not, I won’t live where we shared a life when she died. People do, obviously. But it’s never been ours and it’s crumbling, a charming old trap haunted by demons. For all that’s positive, we dreamed for years about getting the hell out and how good it would feel. I’ve been writing about this forever. Its not the last stop. She never wanted it to be and look what happened. I owe this to her. My time’s not up, she had to go. I have to stay in this body, but I can go anywhere, do anything. And I will.

Feet on the sand in the shallows. It has been a refuge. When the wind blew outside and the snow piled up high, we never did hear it. Solid old walls, except where they’re not. 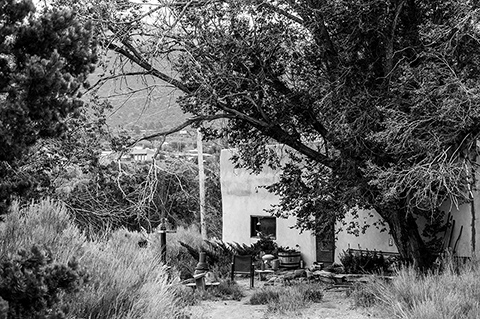 You may think you’ve heard all this before—the dumb shit, my feelings, what happened to her. If so, I’m sorry. I need to experience every last particle. Repetition with new shade is vital. The bits come together in new ways and shock me. Keep going, maybe you’ll see.

“First time I’ve seen ‘acceptance’ on your face since this chapter began. Finally listening to what she’s been telling you eh?”

I thanked him for the quotation marks. (He’s been there himself.) She has been talking to me, like in that dream. The symbology is stunning. Read it again or I’ll just explain:

We’re following Kathy. I’m just a passenger in a beat-up white van. The driver is a tall female figure in a white shirt and jeans wearing a cowboy hat. She resembles a woman we both know from Maryland. Not “her,” but almost. Non-threatening, but in control. White shirt, white van. An angel is driving me. We get to a crappy old town full of rascals on top of a mountain. The van’s parked at the edge of a cliff. Dangerous, temporary. The driver heads off in search of Kathy. I try to see to the van and some fools make it burn up and vanish. One-time use only! I go back to the cliff and look down. There’s a beautiful vast park that looks like New Mexico, with thousands of people oh so far away, tiny like ants and hiking the trails. What a wonderful scene. That’s where my driver is looking for Kathy. All of a sudden I “see” them. My God, it’s my honey! We wave to each other. “John! John!” Kathy cries out. Even at that distance, it’s her, loud and clear. I’m overcome with joy. But how to get down there? Can she get to where I am? How long will that take?

And then I wake up. Aaaaghh. Oh no. What hell is this?

Several days later, the rest fell into place. Wherever she is, she’s doing just fine. If you need it spelled out, the angel showed me that Kathy’s in “heaven” as plain as can be. I can’t go with her, the van is burned up and my driver is gone. This is the lesson to hold in my heart. She knows that I’m here and she loves me. I’m crying just writing this down.

Wouldn’t you? Maybe not quite acceptance, but it gives me a foothold.

Before Kathy died, when I still thought she’d be coming home after her stroke as a person and not in a box, my job was to get the house ready. Who knew what she’d be able to do and what not? She’d had a serious blow. Would I have to feed her, would there be diapers, did she need a cane? How long would that last? Should I buy a seat for the shower, a mattress protector? Could she still play the piano? Oh Lord—if not, that alone would have killed her. I knew little of this since I hadn’t been able to visit for three whole long weeks due to COVID restrictions. Not even once.

To make everything “easy,” my thought was to go through her clothes, cosmetics, and reading material. Put outfits together and ready to grab, have things that she needed all in one place. At this point I had no idea how her cognition and coordination were faring—not well at all, as I later found out—and had to make do. To start with, I emptied some drawers and the cedar chest. Dangerous business for sure, but I had to do something. (This was actually the day before I’d be bringing her home, tra-la-la.) Meanwhile, I thought I needed some items from Walmart—to show you how crazy I was, one thing was lampshades—and while I was pushing that greasy damn cart down the aisle came a phone call from the rehab center with her nurse freaking out, telling me she was “declining…”

(What happened next is available here.)

The point is, a ton of her clothes were all over the floor. I spent the next 35 hours awake with my sweetheart as her life ebbed away, and the clothes are still there. So shoot me already, who cares. Call it grieving or illness or avoiding exploding my own goddamn heart. What I have done since is consolidate, straighten, and make things look neater, but the piles are still engines of terror. Why put things back in drawers, though? I’m afraid to open most of them anyway. A lot of her stuff is high-end and gorgeous. There’s a consignment shop ready to see what I have. Just one stupid example, right, but facing the fact she’s not coming back ever is the hardest damn thing in the whole fucking world.

It’s getting better now, little by little. I start off happy most days. The future is open. There’s a taste of the way things were when I was alone, young, and hungry. Then I remember I’m old—that I had this with beautiful Kathy—and she’s gone, and I’m dead. Every day another resurrection. I roll back the stone. She whispers sometimes. My new job is listen, make art, and survive. 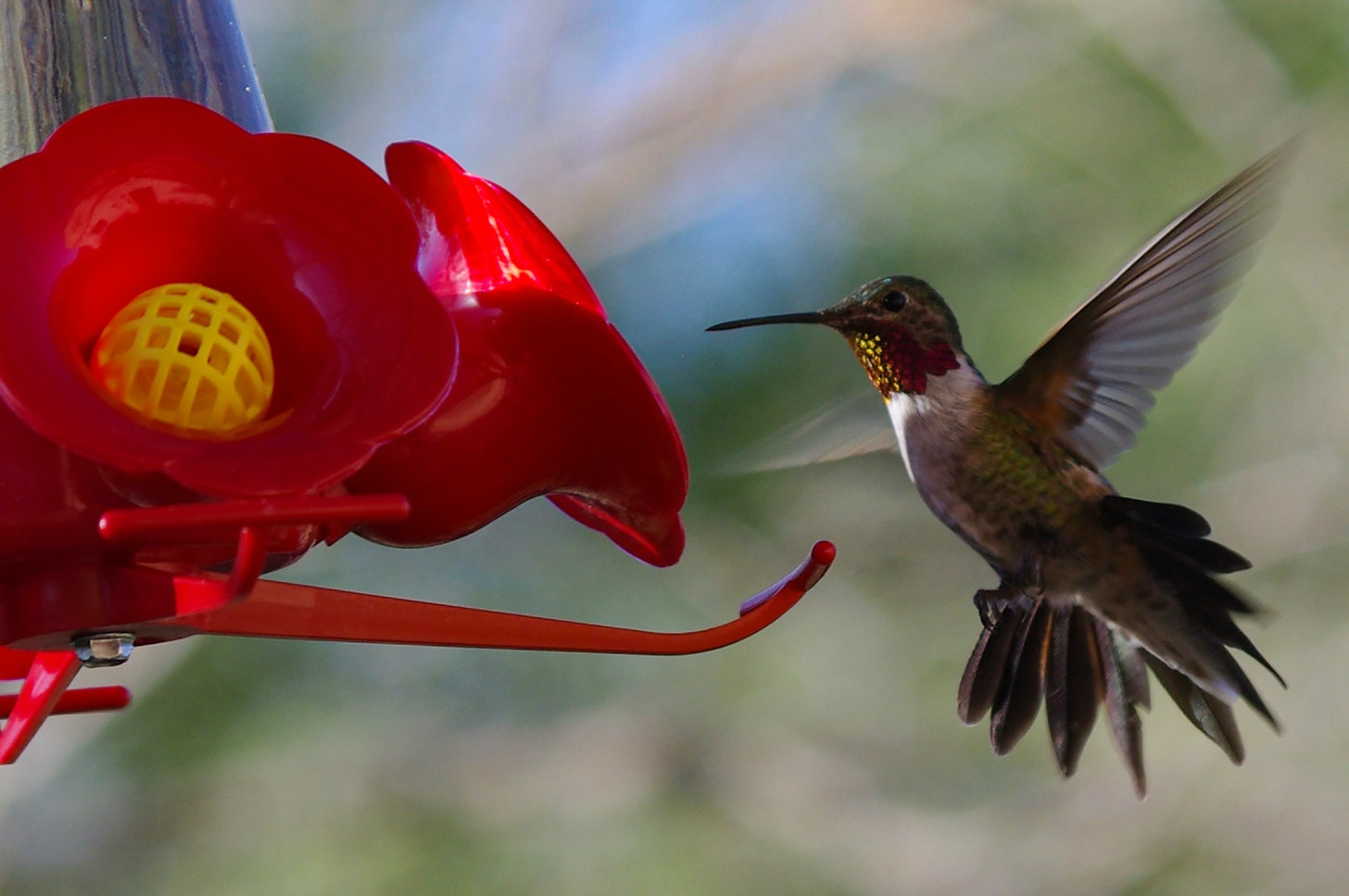