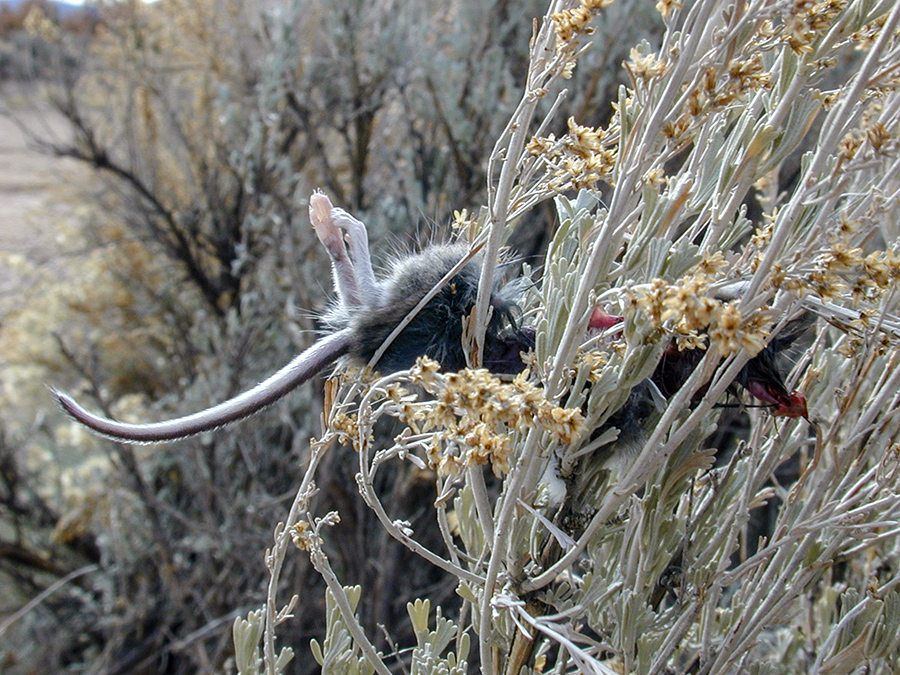 You wouldn’t believe how many photos I took

Maybe I should have been afraid, but I just wasn’t. The fact is, most mornings when I walk out to the road to get the paper, I do a special thing. Taking in the 80-mile view is one way to go to church, I guess, and the little ritual is a kind of centering that never fails to do some good, if I give myself over to the moment. That’s how it was on Sunday, and when my eyes dropped from the horizon, I saw something in the sagebrush. There’s almost never anything “in” the sagebrush, you understand, but this time there was: a partially-eaten vole, to be precise, still warm and bloody wet.

The wind blew strongly from the south and shook the branches, but the tiny carcass was firmly lodged. Back and forth it waved, like something in a dream you half-remember and try not to forget. It must have fallen from the sky, dropped by a raven or a hawk, or been accidentally lost by dueling magpies, I reasoned. Curiously excited, I walked quickly back to the house and grabbed my camera. For the next ten minutes I took picture after picture without really knowing why: it was just a little thing, or so it seemed, but I was totally consumed, even happy, without knowing who or what to thank.
 
Earlier in the week, it was the truck. Wonka-wonka-shudder, vroom. Wonka-wonka-bonk. I’d really almost had it. Every time I started off, it felt like the driveshaft was out of balance: a quiet little knocking coming up my left leg, and then away we’d go. Nothing major, just enough to dull the edge of my mechanical joy. I’m sensitive to this stuff, though, and it had been that way for several weeks. I kept thinking, I’ll have to take the Ford to Lorenzo. And then I’d say to myself: but Lorenzo’s shop is 15 miles away. He could maybe drop me off in town, but how would I get down to Llano, much less make it back when he was done? Getting cars fixed is just one advantage to having two and not living by yourself, I’d think, and then feel dumb and lonely. Imagine going round and round like that, just from letting out the clutch.

Sitting at an intersection a few days ago, I blipped the throttle once or twice, more out of boredom than anything else, and felt the lumpiness again. Except now the clutch was depressed, which meant who cared about Lorenzo? I quickly deduced that the engine was actually missing slightly in a certain RPM range, though not if I held the revs to just that speed, only if I ran it up and down. How odd, I puzzled, but maybe this was something I could fix myself.
 
When I got home, I raised the hood and checked the distributor. Sometimes overlapping spark plug wires can cause a misfire if the insulation is cracked, but everything seemed fine. Acting on impulse, I leaned over the fender and pressed the distributor ends of the wires with my thumb, one at a time, to see if any were loose. The last one I got to was the only one that moved a tiny bit, but I heard and felt a “click” and cried “AHA!” Sure enough, when I climbed inside and turned the key, the engine roared to life with one less crankshaft turn, and when I gently let the clutch out, four thousand pounds of truck eased off without a stumble.

A few days later, I found the offering in the sage. Before I sat down here to write about it all, I looked out toward the mountains. In the uppermost branches of a leafless aspen sat about a dozen magpies, all facing the same direction: a magpie armada, glinting in the setting sun… I thought to myself: they can’t see me, but I’ll bet if I reach for my camera, they’ll all fly away! My hand touched the case, and three took off. I loosened the lens cap, and four more were gone. They know.

Early today it thundered ice pellets for half an hour and then began to snow. Throughout the morning, everything was blotted out by swirling white, and then the sun came out. I looked to the west and saw more clouds come rolling in. (Snow seen from the side looks dirty gray unless it’s in the light and then it gleams like it’s on fire.) Twenty minutes later all was gray and still again, and a subtle prickly mist began to fall. Just now I raised my eyes and ice came down for half a breath.

If I drop dead tomorrow, remember I’m okay. But stay away, I tell you, stay away: something’s going on here that may leave my heart exploding with a roar.