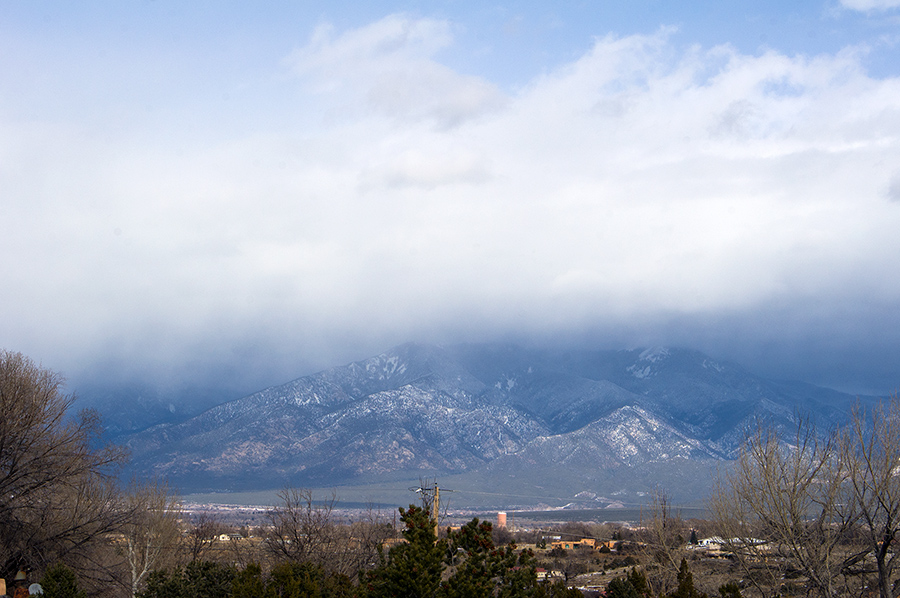 They’re supposed to have a blizzard tomorrow on the eastern plains. The mountains will protect us from most of that, but it’ll be damn cold. (When you get down near zero, the numbers hardly matter.) Just a little snow today, probably more by morning. That’s the first batch of it rolling in above. The wind’s been blowing hard all day. There were shards of white clouds streaming across blue sky at first, and then the clouds grew thicker as the sun went down. I’m glad I got to see the almost-full moon on the snow last night, because tonight there’s not a sign of it.

This morning I found myself holding forth on Christmases gone by, especially in the early years of our relationship. The thing was, we lived in Maryland. My parents lived in Tucson and my in-laws in Des Moines. Sometimes we traveled to both places, but always to Des Moines. I remember sitting in the airplane in Des Moines with blankets over our legs, late for take-off because it was so cold outside, they couldn’t start the engines. My wife was a college professor. I was an artist with various day jobs but mostly played my guitar and vacuumed, so we usually had the time to get away between semesters. A shorter way to put this is that we almost always drove to Iowa and back in the teeth of winter.

That alone is worth a book. We always did this in the stupidest goddamn cars, too, that I always had to stop and fix. Her ’65 Volkswagen Bug, my ’64 bus, or the remarkable ’69 Saab V-4, which died just outside Des Moines, halfway through an epic journey that was to be its last in any case: a trip to Tucson to pick up my dad’s yellow Volkswagen Rabbit. We drove that bugger all the way home and nearly bought the farm on icy roads in Tennessee.

Travel was so different then, before cell phones and the Internet. I used to visit the public library before a trip. They kept a shelf of phone books from all over the country. I’d find a motel address and telephone number in Indiana, say, and write it down to stick inside my wallet. Usually the drill was drive until we were tired, stop at the next town, and see what we could find. This was after the initial period of camping or sleeping in the VW bus behind a truck stop. That didn’t last too long.

Considering how important the weather is, I can’t believe the risks we took back then. There simply wasn’t any way to know what you might run into up ahead. We’d try to pick up distant stations on the radio and hear what they were saying, but it almost never worked. You might meet somebody at a gas station who’d come from the other direction, but that was it.