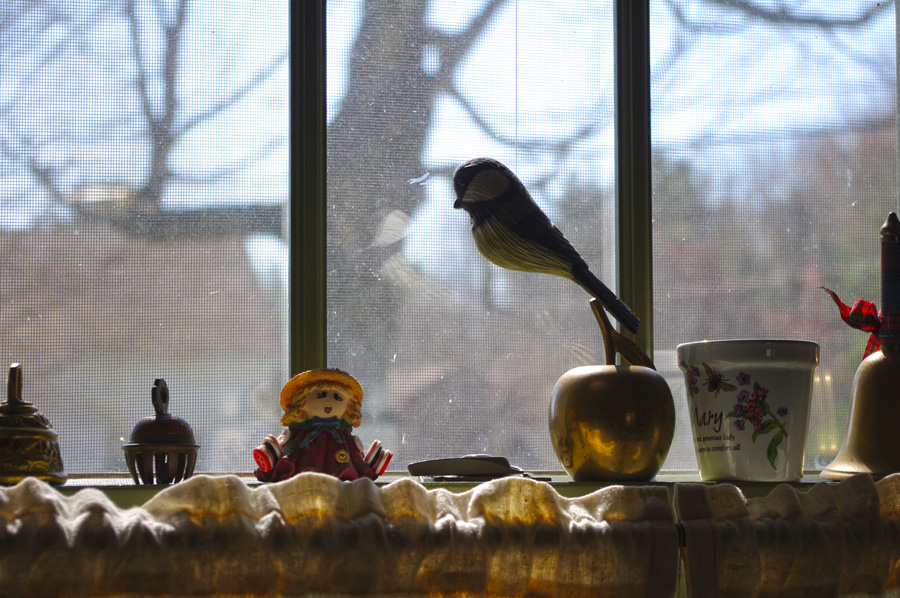 The days are passing quickly and are almost gone. To the many ancestral artifacts at my 99-year-old dead aunt’s house, I now add the fully loaded semi-automatic rifle I found two nights ago in a closet, oh yeah: a 1965 Marlin Model 989 .22 caliber carbine with a walnut stock and a seven-round magazine, tucked back in the corner with old bedspreads and a pile of shoes no one will ever wear again. I doubt she ever had anything to do with it, so the weapon must have been her husband’s. (Thank you, Uncle Tom.) I’d post a picture, but it’s already on its way to Taos.

While I sit here with my coffee, waiting for the auctioneer to show up with whatever papers I have to sign, I’ll let you read the saga of how I sent it off exactly as I emailed my wife, edited just a bit for clarity the morning after—not literature, just sharing. Maine is quite a place, as I already knew, and this will set the impressions firmly in the mind for all to see. Later, then, and please enjoy…

Shipping something like this is complicated due to our contemporary world, as you can well imagine. But if one wishes to ship a rifle like I just did, one almost has to bring in a federally licensed gun dealer at one or both ends. Said dealer will charge what’s called a “transfer fee” or $30. Okay, fine. I found a dealer in Taos to ship it to—High Desert Firearms on Cavalry Rd., appropriately enough, somewhere over in the general direction of Cruz Alta. That was fine. Ship the rifle to them, they’ll charge me $30 to “transfer” to me after running a 15-minute FBI check, and there you go. The kicker was that I had no packing material or appropriate box in which to ship a rifle, SOOOO… I enlisted the aid of Son of Kent, a jovial well-adjusted 30-something fellow in a hot-rod Mustang whose real name is Ross. He works part-time at a Winslow, ME gun shop about 15 minutes from here.

Following his directions, which included recognizing his friend who works there also (“big guy with a bald head and tattoos who rides a Harley”), I proceeded to Winslow. After all, if you want to ship a rifle, why not have a gun store do it, duh. They have boxes ‘n’ everything. Okay, fine. I had no trouble there, except that to initiate the shipping with them required another said transfer fee. I’m “transferring” the weapon to them, and the gun shop in Taos will “transfer” it back to me. Oh, and the shipping (boxing, etc. etc.) costs FORTY dollars. So now my free rifle will cost $100. Well, I can’t take it on the plane, can I?

I wasn’t too concerned about all this, because I’d read on the Internet that the Marlin 989 is highly regarded and usually sells used for $150-250, and of course everything you read on the Internet is true. As I was concluding the deal in Winslow, the gun shop owner allowed as how the gun must have sentimental value for me, because they’re only worth $100-125! Ack! Not that I would have done anything differently, I suppose. I never would have gone out and BOUGHT such a thing, but I was so delighted to find a ***free*** rifle, we all know I was going to send it home. Okay, so there’s that.

And then there’s the matter of the ammunition…

It takes .22 caliber long rifle rounds. I know what that means from my boyhood. They’re slightly longer than other .22 rounds and designed for rifles instead of pistols. No problem, except that during the current political situation in which all the right-wing nuts think Obama is going to steal their guns and ammo, .22 long rifle shells are supposedly hard to find. Ross told me to show up at my local Walmart at 9:00 a.m. on any given morning when the shipments arrive and see if I could score some. Hmmph. However, Uncle Tom (bless his heart) had left several small boxes of ammo with the rifle. Eureka! Except you can’t send them in the mail… not now, at any rate.

What you can do is ship them via UPS for a $15 fee plus actual shipping cost, which can’t be much, because it’s hardly a handful. But you can’t send them via UPS from a UPS store, you have to go to a UPS hub… Are you taking this down? (I’m going to have to blog about all this at some point.) A UPS hub is simply the place where the UPS trucks come together to drop their shipments before they go out in the vans that deliver them to places like our house. No problem!

Except the UPS hub I looked up was in Waterville, conveniently across the Kennebec River from Winslow, and by the time I got there, it had CLOSED for the day.(It closes at 4:00 p.m.) Okay okay. I’ll go back tomorrow.* These places are only 15 miles from here, but getting there was a mild chore because there is such a warren of streets and roads, AND… in Maine, only the cross streets are named on street signs! That’s right. The street you are ON can’t be divined from any signage. What a quaint regional custom, probably designed to save money on street signs and because “evahbody knows wheah they ahh anyway.” So of course I got lost.

That’s okay, because it was kinda fun driving all over creation in Maine. All these little towns are like half a mile apart, without real open spaces between them, so you’re just driving along interminably at 35 mph past all kinds of cute little houses and barns and ponds and motorcycle dealers and more ponds and cute little houses and railroad tracks and bogs and guys walking around with no shirts or WHITE SLEEVELESS T-SHIRTS (tank tops) like our fathers did when they were boys and none of the streets run at right angles to each other and “To Belgrade” signs don’t mean shit to people like me. You can’t see more than a hundred yards in any direction ever because the trees are so dark and thick and besides, there are more ponds and houses and snowmobiles covered with plastic and fat ladies and LOTS of traffic no matter where you are.

It’s so bizarre. There really is a time warp here.

By this time it was 5:00 p.m. and instead of heading back here via the way I came past all the ponds and woods and cute little houses and bogs and guys with no shirts and their fat girlfriends and railroad tracks and motorcycle dealers, I took the Interstate back to Augusta. More signs telling me to watch out for moose in the roadway, too. And I remember what the woods on the side of the road are like. I doubt even a very skinny person could penetrate them more than a few feet. SOLID with dark, dark pines and crammed together tiny birch trees with no leaves yet. And boulders. BIG boulders.

As I came through Augusta, I stopped at the UPS store again and took another look at the boxes. Hmm. So expensive! Like $7 for a little dinky cardboard box, not counting the shipping cost. I had extraordinary difficulty understanding the woman behind the counter. Her voice was high and nasal and she might not have been speaking English anyway. it’s very weird here. So for the second time, I walked out of the UPS store without buying anything. I have time, anyway.

On the way home, I stopped at Hannaford’s Supermarket instead of going out to eat because I was frazzled. Because I was starving, however, I bought all the wrong things and brought them here and ate them and now I’m fat and they didn’t taste good anyway, which both of us already knew would be the case. But I’m not hungry now.

*NOTE: Apparently one can take a small amount of ammo in checked baggage. Who’d a thunk it? America!