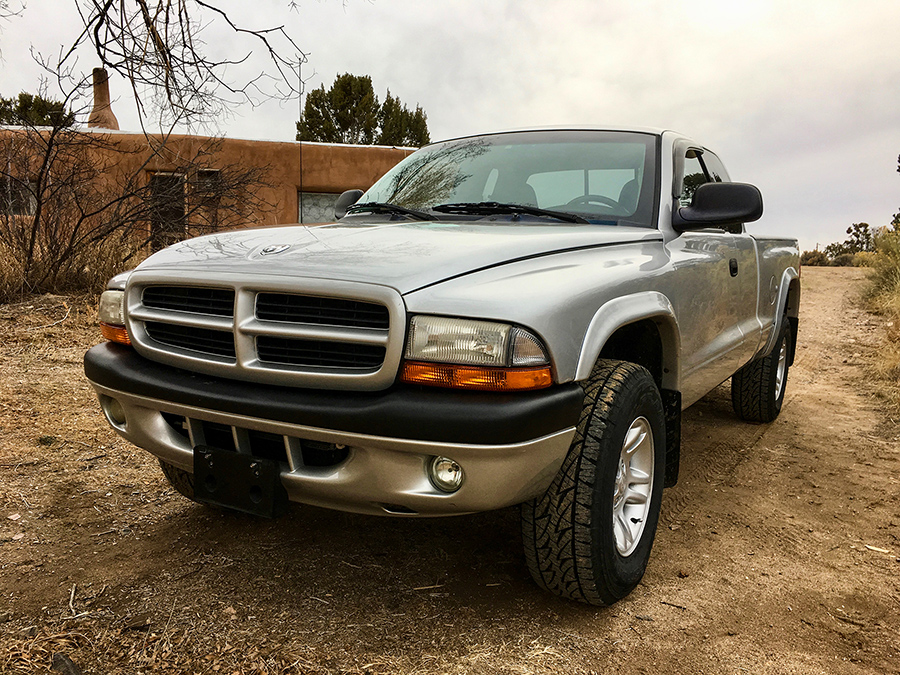 Houses are too expensive in Taos so I bought a truck

Charles Savage drove a mean ’58 Dodge convertible back in Abilene. Dark metallic blue it was, and had three carburetors. The honking big V-8 and dual glass-packs made a thick, explosive rumble like a pack of Harleys in a barn. His father owned a dealership, of course. About this same time, I used to ride a red Cushman scooter to school. Briggs & Stratton lawn mower motor, centrifugal clutch, one brake at the rear. This being Texas, you could get a license to ride a “motorcycle” with no more than five horsepower at age 12. The Cushman, for example, or a moped. At 13 you could get a learner’s permit to drive a car if you had a licensed driver with you, which meant your 14-year-old buddy, maybe Charles in a pinch. He never offered to let me drive his Dodge, but we did go to gas stations with another idiot to ask the attendant for a dime’s worth of gas. Being in a loud convertible made this more hilarious, no doubt, though I tended to slouch down out of sight, and no damn body got shot like we do now that we’re all great again.

When I saw the 2001 Dodge Dakota 4×4 on the Santa Fe Craigslist, my eyes jumped right to “bulletproof 4.7 V-8” in the opening description. This was big because it told me I was dealing with a brilliant mind. The rest of the ad confirmed he was a car guy and he knew his punctuation. He’d also just moved down here from Chicago. The truck had been part of his family its entire life. It had every heavy-duty option in the book, even a transmission cooler. Everything replaceable had been replaced. Shocks and brakes and tie rod ends. New tires. There wasn’t a single dent. The original dealer sticker was in the ad! I texted the link to my brother. He messaged back, “Nice truck there, and you can tell the guy isn’t a savage.” No shit. And then, “You need a decent truck if you’re ever gonna move.” I hadn’t really thought I’d ever jump, but there it was, ka-boom.

We drove to Santa Fe to have a look. I had the asking price in cash. The seller turned out to be a baritone saxophonist house-sitting at a mansion on a hill. Not bad, I thought, and meant to ask him where he’d bought his shoes. When he told me his father owned a muscle car restoration garage back home, I knew the wizard energy was working. He started up the 4.7 and apologized: “Some people think it’s too loud…” It wasn’t.

I drove it up from Santa Fe without a license plate and no insurance. The truck tracks like an arrow. It rumbles like the ghost of giant Harleys in the barn and I’m on high alert.