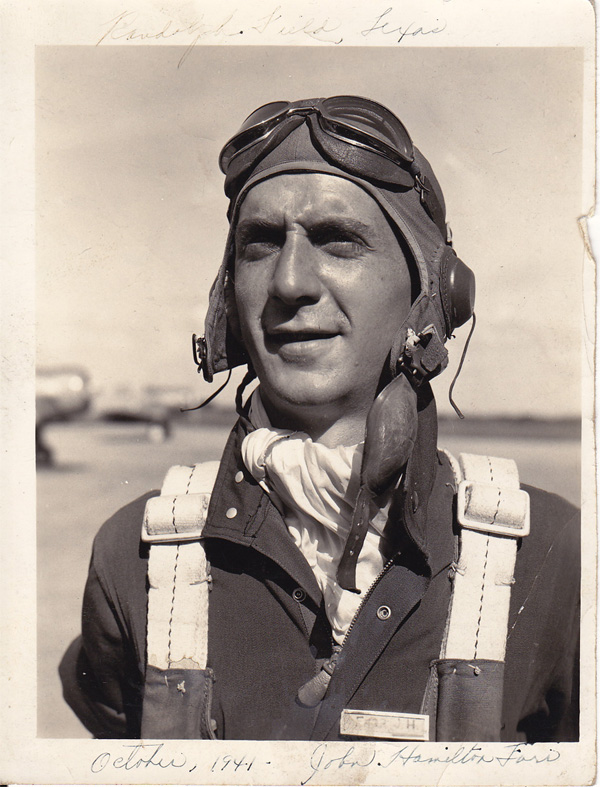 This is probably my favorite photo of him, taken at Randolph Field, San Antonio, Texas on his birthday in 1941. He doesn’t have his wings yet but he will just five months later, when he married my mother and it all began. That’s a 23-year-old Officer Candidate School flight cadet you’re looking at, and Jesus, did he love to fly. With my own birthday coming up in two days, all of this is on my mind.

At this point he didn’t know he wouldn’t be sent off to fight the Germans or the Japanese. (For that matter, the country wasn’t in a declared war yet.) After graduation, the Army Air Corps made him an advanced flight instructor instead—too damn good a pilot to be wasted under fire—so he spent the whole of WWII teaching hothead buddies how to fly and swivel their heads to look for Messerschmidts. Most of those boys died. The crazy bastards made for better killers, I expect, and the survivors came back from Europe or the Pacific at least two ranks above him. He stuck it out regardless for another 20 years and retired from the Air Force with the rank of lieutenant colonel. The ones he taught taught well enough to save their asses made it all the way to general! I don’t think he ever got over that.

There’s an inscription on the back side in his handwriting. (That’s my mother’s on the front.) Being who he was, he felt compelled to apologize for what he called “a horrible expression.”

“Was looking into the sun, and a smile was being forced upon me.”

I guess so, because he rarely cracked a grin that I remember when he was older. If we called him on it, he would say that he was smiling “on the inside.” I don’t know, though. And I’m not known for smiling like a fiend myself. It does get better, chilluns, it really does. But you have to go down deep and find the ruts. Learn the “rules” and then move on so you can break them. I know now how important these things are. My wife from Iowa has a smile that melts brick walls, and I see it 50 times a day.

If I woke up and it wasn’t there, I think I’d just drop dead.