A Great and Terrible Sadness 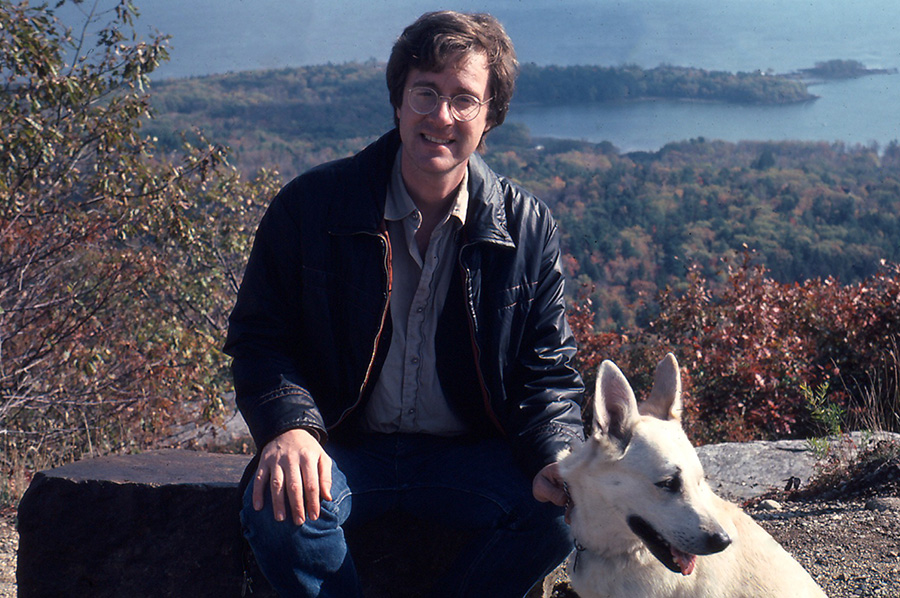 Guess who still has her choke chain

Something deep and dark has found me. The trigger came yesterday morning when I remembered Lady the Wonder Dog (above). The locale in that photo, though probably irrelevant, is Camden, Maine in ’78 or ’79. A few years later my wife went on sabbatical, and we were set to go to Europe for six long weeks—or was it more? The only problem was the dog.

My wife had planned her musical pilgrimage for years. We’d be going to London, Amsterdam, Cologne, Munich, Salzburg, Vienna, Florence, and Paris. All on the cheap, of course, the only way for us to manage it. (I’m talking scary cheap!) We even moved out of our house and stored our belongings in my grandmother’s garage to save the rent money for the trip. We had another place lined up to move to when we got back, an old colonial manor house on the bay, but we couldn’t find anyone to take Lady in while we were gone. That left boarding, but no one was prepared to keep a dog that long.

Finally, as we were getting desperate, we learned about someone who had a farm and boarded horses. As it turned out, he was open to long-term boarding for Lady and wouldn’t charge too much. We made arrangements. As awful as it sounds, we had to drop her off by chaining her to a gate without ever meeting this person and simply trust that everything would be all right. I can’t believe I did this, but I did.

The trip was long and strenuous and probably incredible. I thought about Lady and our new home every day.

I remember so clearly driving back out to the farm to pick her up when we returned. Again I’d only spoken to the man by phone; he couldn’t be there for some reason, just the same as when we’d left her. He told me where to go inside a certain barn, and there she’d be. I forgave that, anxious as I was to get her back, but what we learned was horrible. It looked as if she’d spent the whole time we were gone inside the dark and empty barn we found her in. Lady took a long, long time to recognize me. I was shocked. She was like a different animal. Had she even seen the sun? It was obvious that no one had spent time with her or taken her for walks. That was heartbreaking, but at least we were all together again.

It’s a good thing I never met the man who did that or I might have killed him. Perhaps I’ve done so in my sleep.

Oh, what turmoil and disruption followed. The rental deal fell through and we had to borrow an apartment for a while until we found another. Eventually we had a home again. Lady got better, but she never was the same. Within a year she developed cataracts and started going deaf. Soon her hips went bad the way they do sometimes with German shepherds, and she had trouble lying down. The spirit of my friend returned, her health did not. All at once, it seemed, she’d become a poor old dog.

Then came the afternoon she stood there looking at me, wagging her tail, and shit a great big pile in the middle of the rug without skipping a beat. Angry and scared, I drove her to the vet. He was kind but told me Lady’s time had come. It was all over in a matter of seconds. I stood there stroking her head as she went limp. Me, who’d raised her from a puppy. There was no place to bury her where we lived. I came home with a collar.

That was thirty years ago. Yesterday it all came back and hit me like a freight train. I knew I had to write about this and wanted a photo of Lady for the post, so I drove to the storage unit to find the plastic bin with all the artifacts. So many photos, so many slides… Naturally, I couldn’t believe the things I found: pictures of me at age sixteen building trails in Olympic National Park, slides from trips to Mexico and Germany, photos of friends and family when everyone was thin and sexy. There were images from everywhere we’d ever lived in Maryland. The gardens, all the things we planted. My beautiful wife was right there by my side. (Look, I’m even smiling!) The richness, depth, and glory of our lives was overwhelming. In the fifteen years we’ve been here, I hadn’t looked at any of these until that afternoon. Everything made me cry. These emotions go way beyond my years with Lady. Something buried deeply in me wants attention and is forcing me to look.

Taos is in many ways a life-quiz. The mountains get you close to energy and mystery few people know. This is to be prized above all else. One can dedicate one’s life, and so on, and in important ways I have. The images I have of this adventure on my hard drive are a revelation, too. But compared to the totality of all that’s gone before, there’s something vital missing. What if I’m the one who’s shut up in a barn?