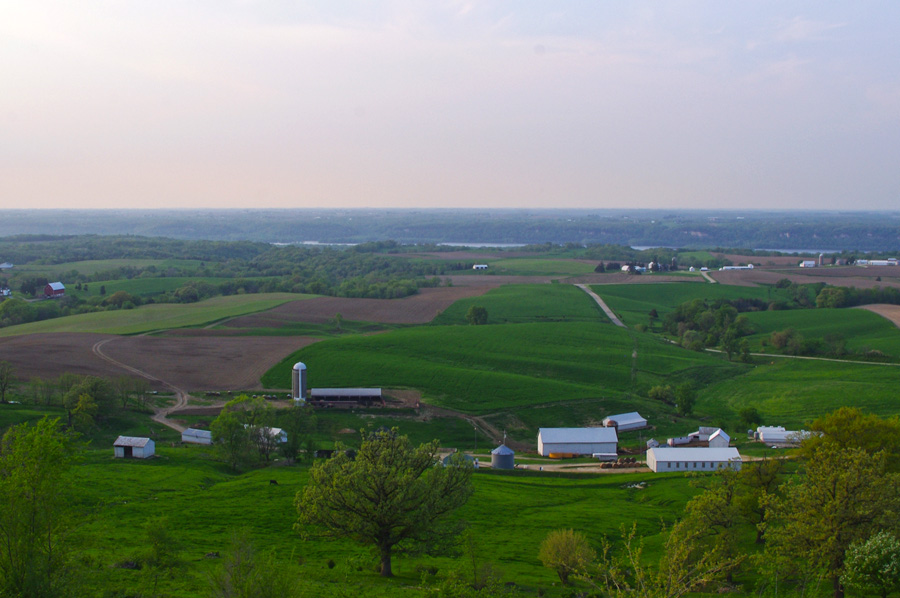 The last time I stood here, here were pelicans gliding in the breeze

I could almost live in Balltown. Well, for a couple of weeks, anyway. This is the view from the scenic overlook just past Breitbach’s restaurant, and the photo doesn’t do justice to the sense of being up in the air you get along this ridge a short way from the Mississippi. (That’s the river in the background.) The stretch between here and Sherrill is gorgeous now with flowering trees and such. It’s probably the closest one comes to mountains here in Iowa and feels more like a genteel West Virginia where everyone has jobs and razors.

Breitbach’s is a hoot and a half. There’s a beer garden out back, but inside you’ll find the finest examples of deep-fried pork tenderloin sandwiches in the world. Fried anything, actually. They used to have fried ice cream, but I didn’t see that on the menu this time, possibly because the place burned down twice since I was last there. I can imagine the insurance adjuster saying, “Okay, one more time, but dammit, cut back on the grease traps!” and something had to go. Personally, I may never recover. (We even had onion rings as an appetizer, so you see where this thing went.) They had a buffet tonight, all you can eat for $16.95. I saw one fellow eat three servings of fried something, and I swear his wife had a couple pounds of potato salad piled up on her plate. Dear God in heaven.

It’s so damned verdant in Iowa right now, it’s like being on another planet after Taos. Something gave me an awful headache this afternoon, and I figured that was it, so I told my wife I was allergic to grass. (Hell, just look at it!) She wasn’t buying that, though, and in any case I have to play it cool because in over 30 years of coming to Iowa, I have often been a bad, bad boy: the omnipresent propriety that hugs the very earth like a stifling fog used to give me the willies—to put a cute face on Mr. Ugly—but I’m all better now and love it for the edge it sets up in me once I’m gone.

The fine young men and women stand up tall and straight. Lawns look like bright green felt. The concrete driveways have no grease spots. All the cars are shiny. Judging from the roadsides, the last person to toss a bag of fast food garbage out the window ended up as hog feed years ago. (That would surely be the dark side of this arrangement—although I jest, what did they do with all the beatniks, hmm?) I do appreciate this, absolutely. It’s everything my scared-ass parents wanted us to be but could never conjure up because of how they hurt inside their souls. So I salute you, Iowa, and the deep fat fryers on the ridge in Balltown.

While I’m busting bear balls down in Taos trying to stay alive, I’ll remember what it’s like up here where things make mostly sense, and when I fall into the gorge, I’ll thank my lucky stars I have a grave to fit my rotten, twisted corpse that held a heart deserving of the love that pours out from my Iowa sweetie like an everlasting spring.