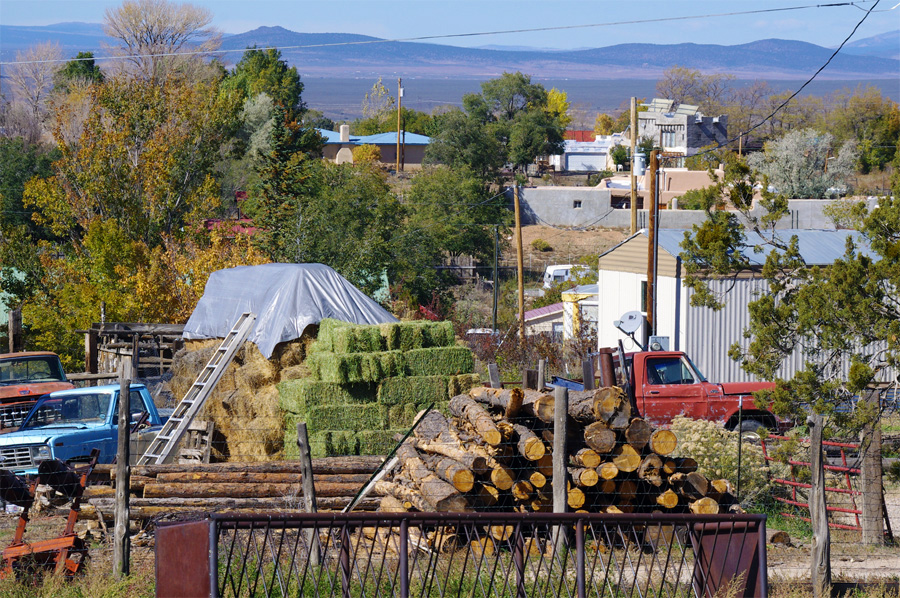 Can’t eat or burn that money, after all

The hay will keep your animals alive, the wood will keep you warm. Just look at all that hay and those ponderosa pine logs ready to be sawed up for firewood! The ones closest to the bales look straight enough for vigas. I say fuel, though. It’s not the best wood, either, but that’s what some of the neighbors do, buy whole logs and cut them into rounds to split. Then again, maybe I’m missing that they sell it. A lot of what goes on here happens at the end of muddy lanes I’ve never been on.

I can’t imagine sawing up the logs myself. Bringing in three full armloads of piñon* every winter night is work enough, and we really need it. A couple of years ago, it got so cold, the pumping stations on the natural gas pipeline froze up in West Texas. New Mexico had to allocate what gas there was in the middle of a cold snap that fell to 26 below. The governor spared Albuquerque and Santa Fe but cut us dirty fucking hippies off up here. No one in Taos had any gas for over a week! People huddled under blankets with electric heaters and waited for the end. My wife and I were fine because we had the wood and I knew how to burn it, but did that ever drive a lesson home.

Unfortunately, my amazing friend and wood guy won’t be able to help us much this year. The heavy rains last month on his mountain turned the only road into a bog, and he hasn’t been able to get up there to cut. (I can’t believe I know someone who has a mountain.) For the last few years he’s brought us the best piñon I’ve ever seen, all of it cut from standing dead trees killed by lightning. This wood is completely cured: knock two chunks together and they ring. Starting means you strike a match and jump. The fire lasts all night, too, so it’s got to be piñon with me.

To get my hands on more, if not the mystically approved variety, I got the number of a woodcutter in Tres Piedras from a Deep Hippie artist/shaman friend and called for a delivery. It then turned out that my wood guy knew the name—”an old woodcutting clan”—and was acquainted with a few of them. “They’re kinda red-necky and all, but they’re okay once you get to know them. The hardest thing is helping them get past their fear.” He went on to say that one way would be for me to show them that I “know some things…”

“Tell you what,” he said. “I don’t know the fellow bringing you your wood, but see if he knows who I am. Ask him if he knows the guy who used to go elk hunting with Jeremy on Windy Mountain. He might say yes, and he might say no, but that should put him at ease.”

Hunted elk with Jeremy on Windy Mountain, got it. Guess I’d better find out where that is.

*Piñon is not the same as pine. Whole other deal and hugely better.