Golden Wet Leaves of the Gods 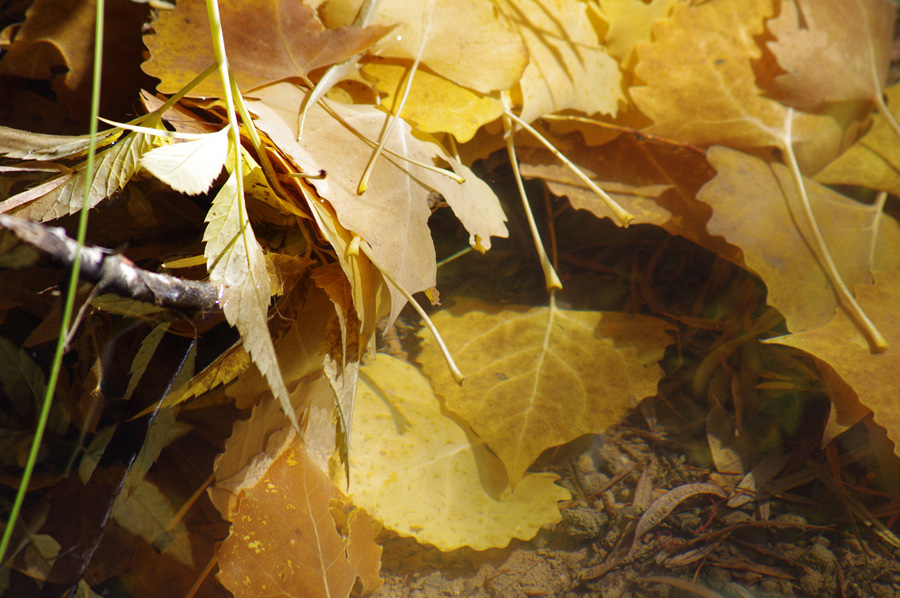 Most of these are underwater. Can you tell where the surface is?

A little voice told me to take my camera with me on my hike today, but of course I didn’t, so naturally I encountered three tarantulas! The third one was the biggest I’ve ever seen, crawling along the bottom of an arroyo. At any rate, that’s why you’re looking at those underwater leaves in the acequia above. For the rest of this, you’ll just have to drift along and dream.

I got out to the trailhead a little before 11:00 a.m. The sun was shining and the wind was cold. There was no one else in the parking area. I was just about to step off down the trail, when a white Porsche 356 turned in from the highway… I can’t tell you exactly which model it was, either the Speedster or a slightly later early ’60s Cabriolet, but it was sure as hell a white one with no top, utterly immaculate and like a vision. I stood transfixed and focused on the moment. If God were going to show up in a car, this is how he’d come to me.

The Porsche came slowly down the entrance road and obeyed the sign, going around the circle to the right. If I stood right where I was, it would pass within a few feet of me in just a moment. I couldn’t really see it yet, but the deep staccato thrumming of the horizontally-opposed flat four sang to me across the sagebrush island in the middle. I knew that sound.

One of the crazier things my old man ever did—this was maybe ’66—was go to the VW dealer in Houston to “look at cars” and come home driving the service manager’s blue Porsche 356 Coupe. He’d bought the thing, of course, without consulting with my mother, whose purgatorial compensation was the green VW Squareback he had also purchased. (“Hey look, I got you something, too!”) Where the money came from, I have no idea.

What I did have was a high-school girlfriend at the University of Michigan in Ann Arbor whom I wanted to visit. I was probably planning on taking Greyhound or driving the ’58 Volkswagen I’d inherited from the family. No one can explain what happened next, but somehow he let me take the Porsche for my trip! It might have been a punishment exacted by my mother, I’ll never know. The important thing is that I drove it round-trip by myself and didn’t get arrested, shooting all the way from Houston to a motel in the middle of a corn field in darkest Illinois the first long day (and night). I have that exhaust note indelibly in my memory, along with how that motor kicks you in the back. And Jesus, there it was again!

The white Porsche circled all the way around and headed in my direction. I hadn’t moved an inch. I could see the driver now, a guy my age or older, short-haired, jowly, and a little grizzled. I made him out to be retired military or a pilot. The Porsche passed me slowly with a pulsing thump. I gave a thumbs-up sign that he acknowledged with a nod, and then he headed back out to the highway. Yes, I thought, so excited I’d forgotten to read the badges on the back to see which engine I was hearing—I knew he’d have to pull out fast and hit the gas, you see, which meant something special was on the way.

The driver paused at the stop sign, took a quick look left, and turned right for Santa Fe. I had a perfect view from thirty yards away. Just as I expected, he wound it out in 1st and 2nd, which almost got him there. The sound that rolled across the desert from the dual exhausts was simply wondrous—there is nothing like a hopped-up air-cooled motor for a certain muffled roar. By the time he shifted into 3rd, he was already out of sight.

I couldn’t believe how good I felt from sheer appreciation. It was like I’d stepped into a river that I didn’t know was there.