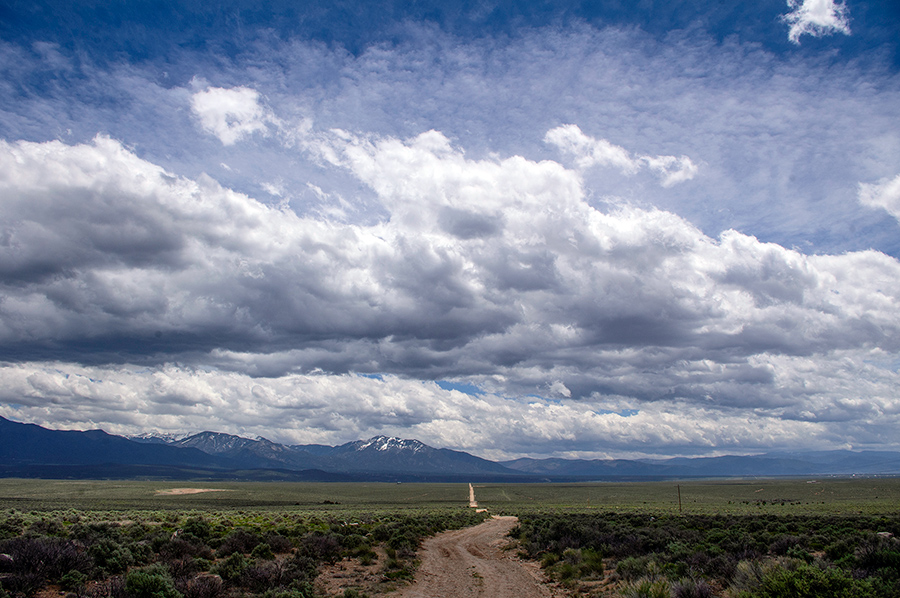 The wind was roaring at 45 to 50 mph across the plateau late May a year ago. It wasn’t cold so much as flensing, as the truck door flew out of my grip in search of bones to break. That kind of wind. I reached the spot you see above by driving west of town, over the gorge bridge, past the ugly earthships in the dirt, the llama herd at Tony’s ranch, and up the hill until I saw the BLM sign for Taos Plateau Access.

It was a weekday, close to noon. I only saw one other vehicle the whole time, a cable TV truck. The driver came out of nowhere I had seen, a spirit truck perhaps, around a curve near where I’d parked and hustled down a road I hadn’t taken yet. If he can make it, so can I, you know. I never saw his truck again.

Once over the distant rise, the road curved down, then straightened out, and kept on dropping. The mountains loomed and it was obvious I’d hit the Rio Grande—must be the way to ‘Hondo, huh. As soon as the chasm of the gorge came into view, it looked as if the road went off the cliff. The switchbacks down were so narrow and tight, all I saw over the hood was air. I’ll never get her out here unless I tell her lies. At the bottom there were hot springs and a bridge, and trees with bushes and flowers. The climb back up the other side was straight and steep and rough like idiots had bombed it. Ten years ago near here a poor guy’s German shepherds ate his mom, so maybe yeah, could be.

This May I wear a mask and dark blue gloves to buy the groceries. I have a debit card inside a baggie with a folded scrap of paper towel that’s wet with Lysol. The shopping list is clipped onto my sleeve so I don’t go fishing for it in my pockets with a plague glove on and get my clothes infected. I show up in the parking lot just after seven in the morning, follow arrows on the floor, buy three or four of everything and spray the bottoms of my shoes and head for home. We might as well be living on a mountain far away and everyone in town is dead. Traffic’s picked up over April since the weather turned. Who knew that zombies had somewhere to go? Waiting for the light down by the Ranchos Post Office, I watch them pull doors open with bare hands.

Never felt I had a stake in things the way they were and who the hell is going back so that’s just fine. Not leaving home except for food is liberating. New Mexico is in a drought again, the sun shines all the time. Sometimes a day-long meditation with the front door open so I hear the ravens squawk. I used to charge off for the slightest errand, now it’s safer to let go. The danger is remarkable. The mountains do not care.

Crush him, they said. He might be Leonardo or a Poe, a queerbait fuckoff dying in the the gutter with a needle in his arm, feared the young lieutenant (hi, Dad) haunted by a teenage circle jerk in Maryland, stoned inside a clapboard shack in Golts—yeah reefer in the ‘30s—not a soul would ever know except they did. An old black village on the Eastern Shore, leafy woods so dark you need a light at noon, a two-room school in Sudlersville? They knew.

It mostly worked for years. Eyeglasses in second grade, real glass. Scary baseball death. What if jagged shards shot into his eyes and blinded him? Next year the old man bought him gloves unprompted, a catcher’s and a fielder’s mitt. Maybe one would take. They played catch in the backyard like an execution. Threw the ball so hard it hurt and daddy left him all alone to pour a scotch and smoke and no one mentioned Little League again. Still he oiled the gloves like he’d been shown and liked the way they smelled and how they felt all manly and protective on his hand, like he could do it.

Everything is different now, the cage of smoke and shadow vanished in the wind. I’ve outlived everyone who hurt me out of ignorance or fear. The guilt trips are all done. It’s all right now, it really is. I’ve always been an artist, only now I know my worth and whence it comes and there is all this time. The isolation suits me. We might as well be living off-grid, since the mountains do not care.

Even if the madman lives, we’ll have electric lights and baths.