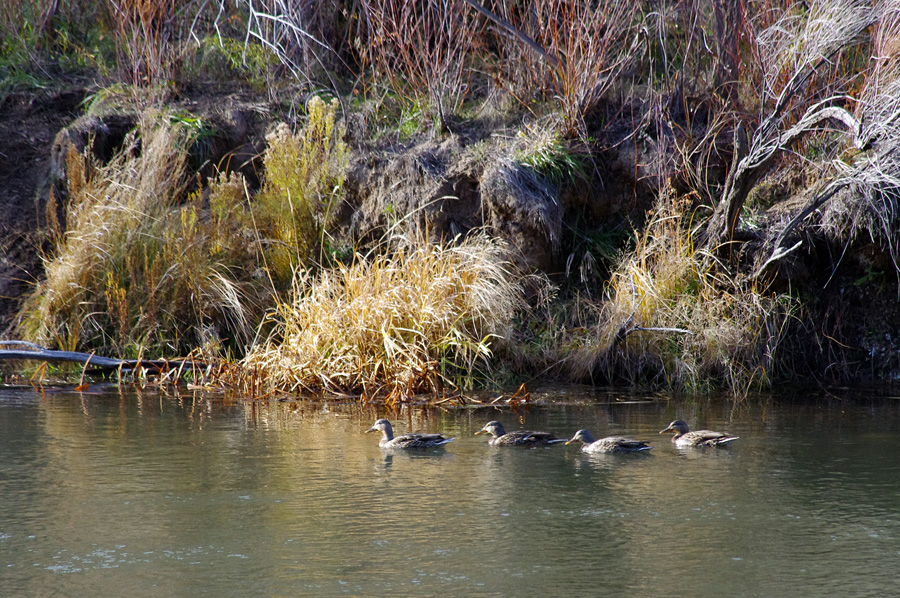 Another dispatch from the terrible high desert! Behold the poor female mallards, forced to feed and find shelter on the banks of the Rio Grande. The water was running high and clear on Sunday afternoon. So much water going south, where everybody steals it. The ducks kept to the slow water unless they wanted to split without bothering to fly. In that case all they had to do was paddle out into the current and be whisked away.

That same day I received an email message from a reader commenting on this November 5th post. I don’t think he’ll mind my quoting it here:

I know the feeling.

In 1992, after visiting NM from NY, I bought a ketchup-and-mustard NM license plate key fob with the word “HOME” engraved on it. Four years later, we moved here. It’s been a mixed bag, but my initial feeling was accurate. It’s home.

I’ve stopped by your blog many times over the years, and I’ve always enjoyed your writing, more often than not, empathizing with your take on this unique place. Keep up the good work.

Regular readers know that “home” has been a preoccupation of mine since we landed here fourteen years ago. The worst thing on arriving was discovering how much less we could buy with our money here than back in Maryland at the time. That’s probably still true. At any rate, it was a shock, and yes, I was unprepared and under-educated, made every kind of “wrong” decision, and drove myself mad for years. I should have been a duck, that’s all. But fortunately, that’s all over now.

That reader may know more about me than I do. He paddled out into the current and got whisked six miles from the mailbox up into the woods!