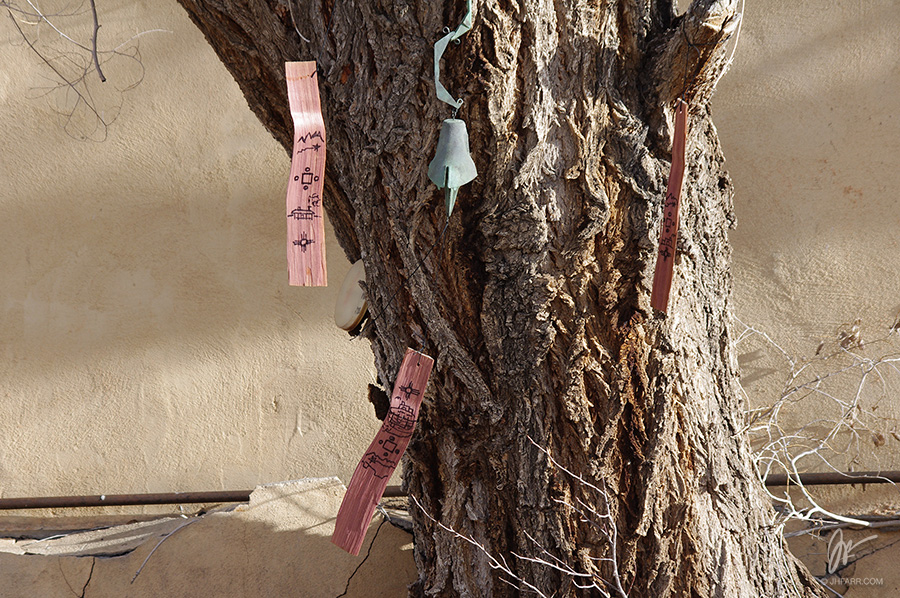 Behold the glorious new day! Just before I’m dead, I come into my own. Anyone can do this, you don’t have to be a fucking kid. (More on that stuff later.) And see? I’ve gone completely native, too. They said it couldn’t happen, but it did. Good God, are we ever doomed.

But no, behold I say! (Was he not listening?) The power of the magic! A new way to get a home so we can finally have all our stuff together and throw it out and start over with two motorcycles and a mule! After consulting with the Black Madonna, I’ve activated a dangerous mystical art device to draw a house to us instead of poking listings with a stick, as if I’d ever trust them anyway.

The cast bronze bell is something I rescued from a tangle of vines outside the dead landlord’s apartment. Attached to the clapper with black twine from my late aunt’s house in Maine is a strip of cedar marked with symbols. The bell rings when the wind blows hard and tosses the wood around. The other two inscribed cedar strips hang from the same black twine and flail about as well, clacking against the tree. Ding-clack-ding-clack and the call goes out! The markings on the wood are strong: pictographs for home and mountains, a zia sign, a symbol from a special dream. The tree itself is growing just outside the old adobe and has lifted up the stucco. Yes, that is a gas line running along the wall. Big medicine all around.

As I write this at 2:00 a.m., the wind is howling from the northwest and has been for some time. Most likely everything in the photo has blown down, but I will resurrect it in the morning. This ain’t no namby-pamby bullshit! I’m going to have to watch my head. A perfect house could fall right out of the sky. It’s on the way now and it’s hungry. Help me, Lord, I’ve gone and done it now for sure.