Best Car I Ever Owned 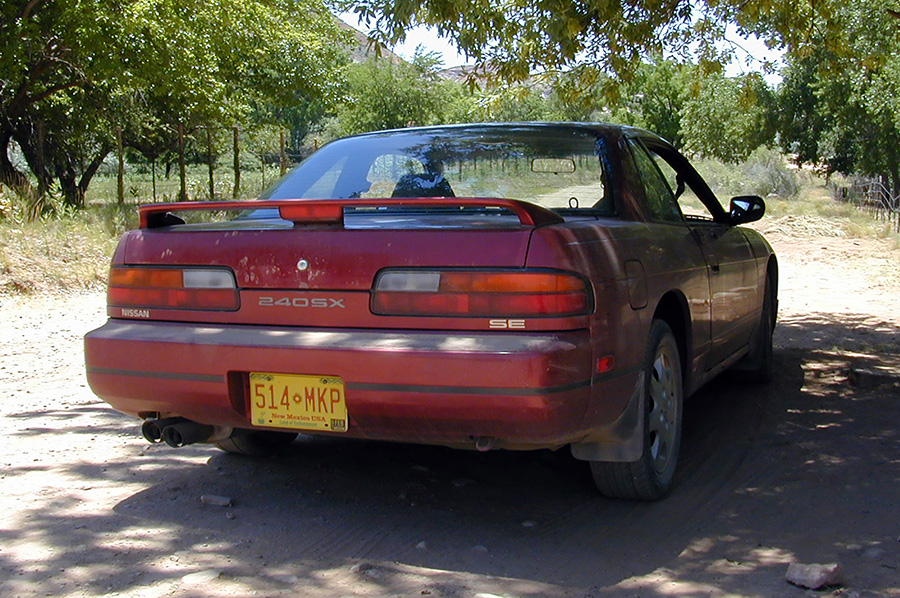 Resting in the shade somewhere in Utah thirteen years ago

That, ladies and gentlemen, is a 1991 Nissan 240SX SE, and I did truly love it. It made me feel like I was finally one of the boys.

I found this one at a used car dealer in Chestertown (MD) while ostensibly looking for a new car for my wife. Other than a vague recollection of a Car & Driver road test on it once, I wasn’t too conversant on the details. It sure looked cool, though, slung low and nasty on fat wide tires, and felt purposeful behind the wheel. This being a laid-back small town, the salesman let me drive it home to play with (we lived ten miles away). He even said I could keep it for a couple of days, no hurry. Now that was one smart salesman!

I bought it, obviously, despite the 60,000 miles on the odometer. I simply had to. A real sports car, the 240SX featured a fuel-injected 2.4 liter four-cylinder engine with four valves per cylinder and dual chain-driven overhead camshafts. This was a torquey engine for a four and produced 155 horsepower. Not all that much, perhaps, but the car weighed less than 2,700 pounds, so it was plenty fast. It had front MacPherson struts and a rear multilink suspension with rear-wheel drive. Steering was sharp and quick. I loved the five-speed manual transmission, alloy wheels, and disc brakes all around. There was a killer sound system, a digital speedometer, and power everything.

We never heard a rattle or a squeak. The car felt like it was carved out of a single block of aluminum. One surprise was the fine big trunk, which made it the perfect grand touring car for me and my wife. You could go 80 mph in the summer with the windows down and still have a normal conversation. Oh, the places we went and the times we had. When I was driving by myself, I could fling the tail out with that rear-wheel drive and corner like a fiend. The car completed me. It was everything I’d ever wanted.

To be fair, my dream machine did develop issues over time. For instance, the digital speedometer conked out before we moved to New Mexico. To get around this minor nuisance, I calculated engine RPMs in various gears for relevant speeds and made a little sticker for the dashboard to remind us. Driving with the tach alone was easier than it sounds, and I never really missed the miles-per-hour number. There were other glitches, mostly electrical, but nothing that affected speed, reliability, or the sheer joy of driving. Life went on.

When my wife left Taos for Dubuque to find a job—hard times, chilluns—and also take care of her mother, she took the Nissan and I kept the truck. That reassured me, though, because I knew she’d be as safe as she could be. Shortly thereafter, her mother gave up driving. That meant the family’s Dodge Spirit was sitting around unused, and my wife adopted it. Utterly undistinguished and agricultural in feel—a sofa pulled along by an underpowered tractor engine—at least its automatic transmission and front-wheel drive made navigating icy Dubuque winter hills much easier. Also, the speedometer worked, which my Iowa-born wife appreciated. Meanwhile, the Nissan had a nice long rest. She made sure to drive it once in a while to keep the battery charged, but mostly it just sat.

After her mother died, my wife moved back to Taos. Before she did, however, the Nissan needed work. Something minor, as I recall. The plan was for her to take it to a brake and tire shop, which she attempted, and it nearly got her killed. Over time the seals on the disc brake pistons or the master cylinder must have dried out. When she tried to brake at the bottom of one of those ridiculous Dubuque hills, nothing happened! I don’t know how she ended up getting to the tire place, but when she reads this, she’ll remind me. They gave her a ride back home and took a good long look at the car. You know what’s coming next, right? Of course it needed “everything.” New pads, pistons, seals, master cylinder, and I don’t know what all. The tab would be well over a thousand dollars. I told the shop to hang on while I mulled it over and my wife and I debated cars. This didn’t take too long.

I badly wanted the Nissan back, but by now, the beast I’d named the “Red Rocket” was getting pretty old. With over 200,000 miles on the engine, resale value was less than what repairs would cost. (I had the feeling you get before you take your dog or kitty to the vet that one last time…) My wife was moving back and we needed every penny, so I decided to give the car away. One of the mechanics expressed an interest. I signed the title over, mailed it to my wife, and lo, the deed was done.

A few weeks later I flew up to Iowa and drove us back to Taos in the family Dodge Spirit, which we loaded to the gills. My wife and I were reunited. The trip was happier than any I’d made in years, despite the loss of my beloved sports car. That which had “completed me” was gone, or was it?

What brought this surging back to consciousness was simply listening to a song last night: “Stop Breaking Down” by the Rolling Stones, from the Exile on Main Street album. Back in Maryland, I had this on a cassette tape that I kept in the glove compartment in the Nissan. I played it crazy-loud and thumping almost every time I drove to town, proud as hell behind the wheel of my Red Rocket.

The intervening years of testing have been hard. Due to chaos and decay as much as healthy choice, I own so much less now than I once did. Depending on my mood, this is either tragic or a great relief. Yet the completion I once sought has been hiding deep inside my heart the whole damn time. I know because the other day I felt happy for no reason. In that moment, just being here inside my skin was all I needed—I could have shaken hands with the President or gone on national TV without a trace of fear or subtext. This will pass, but I’ll remember. I didn’t take a pill or go to church to get it. It showed up on its own and it will come again.

On the way home tonight—we’d been out to a concert—I wound our Pontiac Vibe out slowly in the lower gears, holding the revs high instead of shifting up, so the engine ran near maximum torque. At the bottom of a steep hill heading up, I punched the throttle like a kid, and the Vibe shot forward with a roar. “JOHN!” my wife yelled.