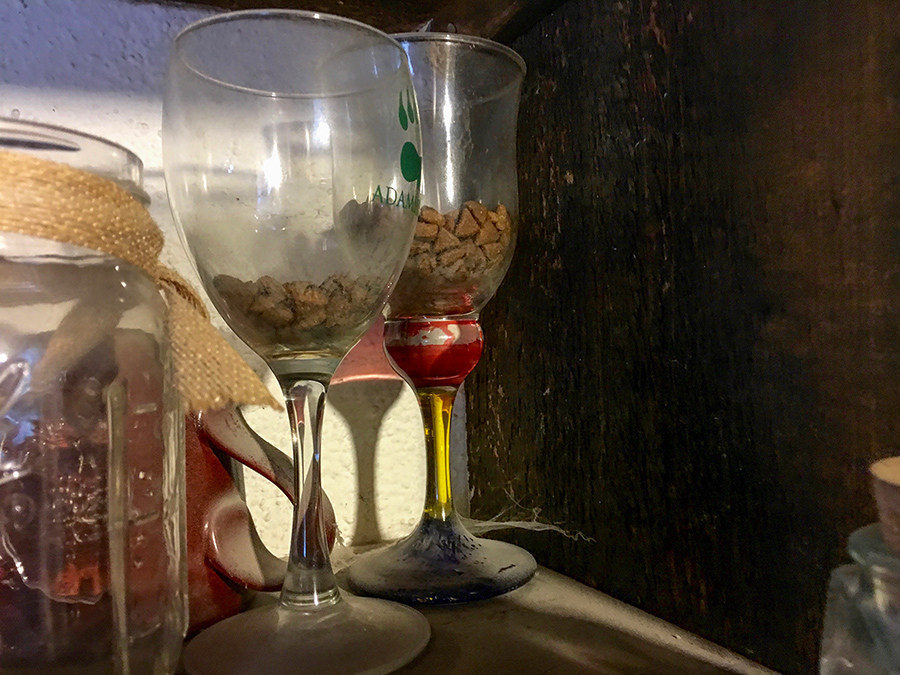 The little bastard just hung there looking at me, its oversized ears flared open and facing front. Kind of cute, actually, with big bright eyes, and the last thing I’d expect to see clinging to the rough boards in the northwest corner of the bathroom ceiling. The space above the “closet,” actually. There’s a wide wooden shelf maybe six and a half feet off the floor with two pieces of conduit suspended underneath. Our clothes hang from these rods. The space above is storage for empty cardboard boxes, family relics in plastic bins, and my old Yamaha guitar that hasn’t been out of the case for years.

I wanted a photo but missed my chance. My phone was nearby, but I’d have to break eye contact with the animal to grab it. I tried. In that split second, it silently vanished. Fortunately, I’d gotten a good enough look to know it wasn’t a mouse. Too big, for one thing, and those ears! Too much brain for a mouse as well. There was just something about the way it sized me up.

A subsequent Google image search revealed that what I had was a pack rat. I don’t know why they call it a rat—more like a large mouse, really, which comforted me somewhat. I also knew I could kill it. I baited an old-fashioned mouse trap with peanut butter and placed it just out of sight on the shelf, where I promptly forgot all about it. Happily for all concerned, I didn’t see him again for over a month, though the next time was in the kitchen!

This was in the middle of the afternoon about three weeks ago. Broad daylight, you understand. I walked into the kitchen and there he was, on top of the shelving over the washing machine, hopping around inside the dusty cut glass bowls. I couldn’t believe it. Can’t go bashing him up there, I realized, and waited for my moment. As I watched, he crept slowly down the side of the shelving to a hanging scrub bucket, which I grabbed and attempted to knock him into, but he fell onto the floor between the washing machine and the water heater! It’s awfully tight down there. I hope this is entertaining. I was mildly amused at the incongruity of having a wild animal in the kitchen and no way to get him out. All I could do was hope he showed himself out the way he’d come, which apparently came to pass.

I promptly forgot about the whole affair, as is my wont, until I spied the catfood in the glasses several nights ago. I’m sure most of you have had moments in your lives when you saw something that didn’t make sense and all your thought processes died. That’s the way it was with this. There were a total of five glasses partly filled with kibble, by the way. Have a look at the photo above, especially the little pack rat hind feet scratches in the dust at the base of the farthest wineglass. I figure the critter had to stand up and lob the kibble in there. In defense of our housekeeping, this evil closeup is from the highest, least accessible, most often ignored corner of the shelves. (Dusting is a triage situation in an old adobe!) I couldn’t even see these glasses until I stood up on the kitchen stool. That’ll have to change now, I guess, although I’d honestly rather move than try to deep clean here once more.

But this is not the end, oh no.

If I’d seen a pack rat above the bathroom closet—the only closet in the joint, I’ll have you know—there just might be a nest up there, I thought. Or rather, dreaded. It made sense: live in the bathroom, cache your kibble in the kitchen. So yesterday afternoon I opened up the stepladder to start bringing the boxes down. The first thing I saw, however, was a dead pack rat. Remember the trap I’d placed up there a long time ago? [third paragraph] This poor animal had been there for a long time, too, and yes, we’d smelled it, but didn’t know where to look. This house, I tell you. Anyway, I had to get it off the boards with a paint scraper.

The other thing was, I found no nest. But there were more catfood stashes in the boxes. I threw everything away.