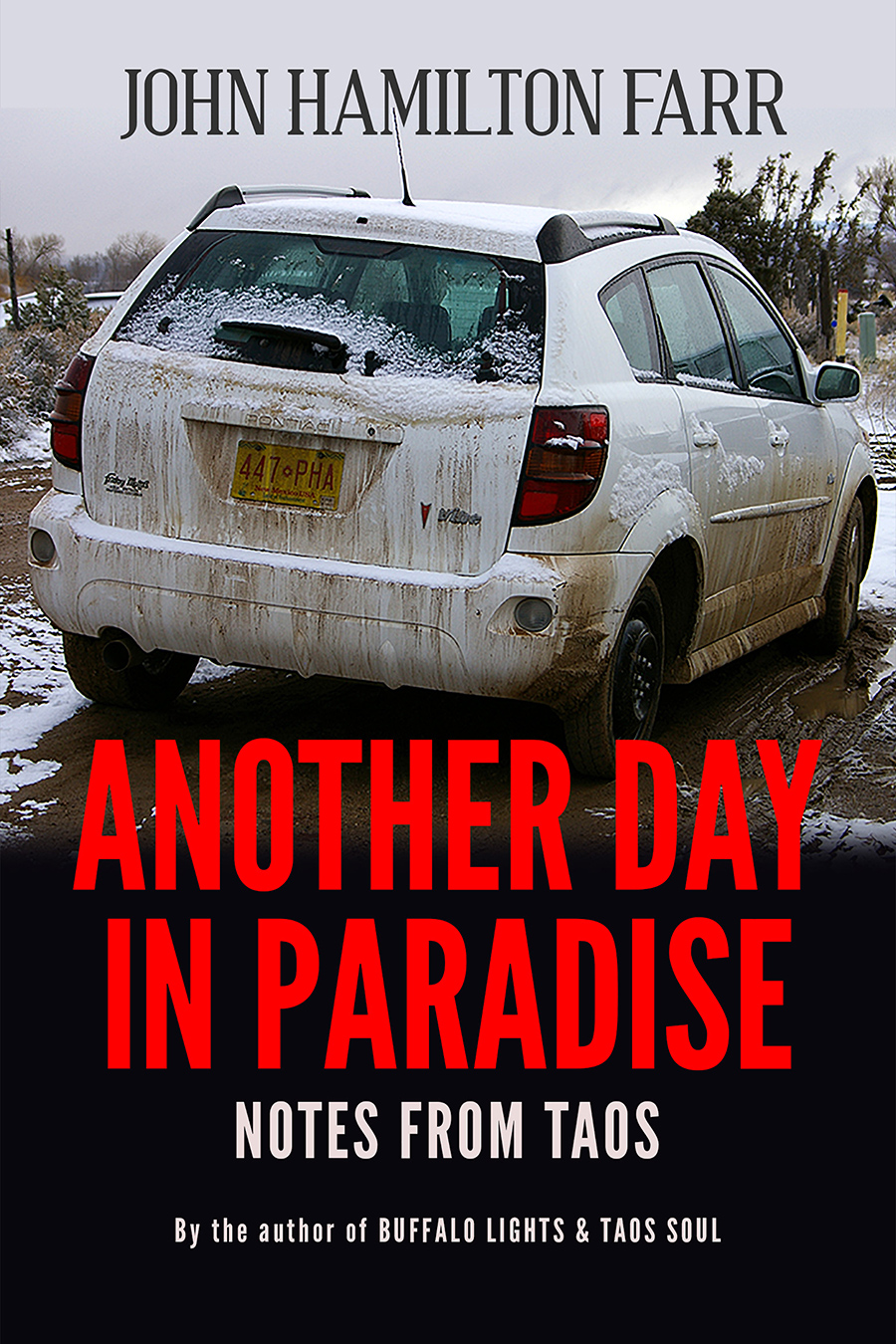 Let there be no more mud forever

Hah! Big enough for you? I don’t have a page for it here yet, but you can grab it now at Amazon. It’s also at the iBooks Store and was approved but later put under review because of an overlooked link to an Amazon page—big no-no! I’ve fixed all that, and now we have to wait. This is a gorgeous digital book. It displays beautifully on Kindle devices and the free Kindle app itself (on any computer or device). My favorite way to read this is the iBooks app on iPads and iPhones, because of the optional scrolling view. If you have one of those, you might want to wait (a few hours? a few days?) for the already-uploaded iBooks version to go live at the iBooks Store.

Here’s the official blurb. It should sound familiar to longtime readers of this blog, which provided most of the heavily reworked content. (Think of it as a thematically grouped curated collection with better photos.) I expect Another Day in Paradise: Notes from Taos will be the last of the original series (Buffalo Lights, Taos Soul) covering life at our current location in this charming but funky old adobe in Llano Quemado in Ranchos de Taos.

John and his wife moved to the high desert of Taos, New Mexico seventeen years ago from Maryland. These very personal notes from Taos cover the last six years. From the introduction: “The floor is hand-smoothed adobe mud spread directly on the roughly leveled earth. The internet cable comes in through a hole at my feet drilled through eighteen inches of adobe bricks. There’s a wood stove and a gas wall heater. No ceiling lights or closets. The oldest washing machine I’ve ever used empties into the kitchen sink unless you forget to hook up the hose. Once I found a baby scorpion on the counter. Black widows thrive in nooks and corners. We’ve had coyotes, foxes, and stray cattle ten feet from the back door. There’s a ninety-mile view from the mailbox. Northern New Mexico (El Norte) is one of the most compelling places I’ve ever lived, with impossible vistas, extremes of climate, mountains, deserts, wildlife, and extraordinary people. It’s also ancient, isolated, and harsh. We came here from established lives in Maryland in 1999, neither of us young or wealthy. Speaking for myself, it was the most outrageous, dangerous, and necessary thing I’ve ever done.”

To get things rolling, I finally activated the JHF✫NEWS. This was originally conceived of as a new releases newsletter. Given my erratic output up to now, however, I’m probably going to make it monthly for a stronger connection with readers and subscribers. For example, there are works-in-progress to talk about, and I’d like embed a monthly video report. There will also be rewards for current and new subscribers to be announced next month. In any event, you can easily sign up or unsubscribe as often as you like. Give it a try. Just one email per month.

I’ll let you know when Apple relents. Onward through the fog.