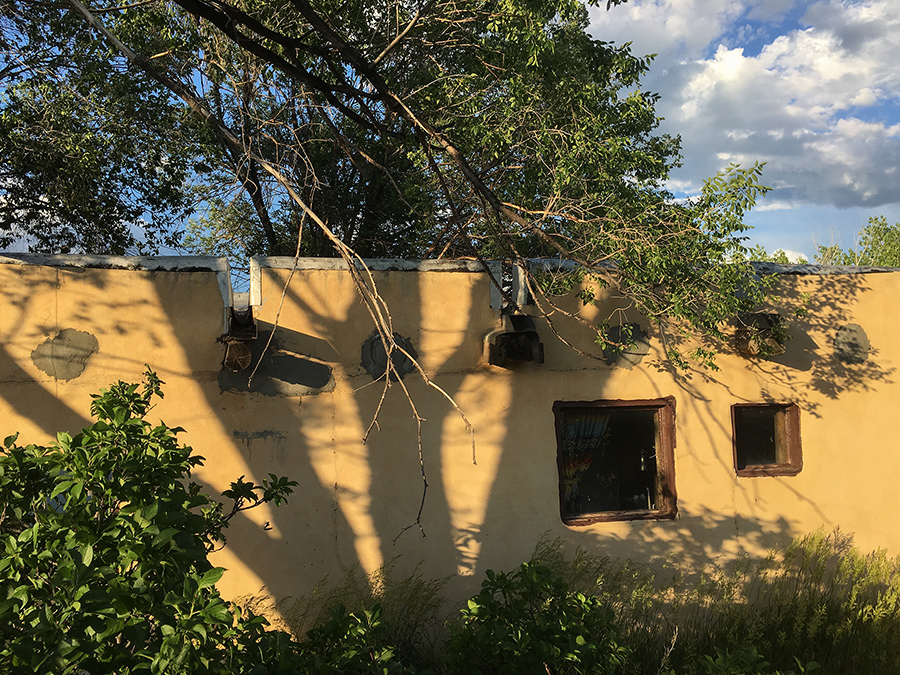 On the third day, it arose, or rather, sputtered. But I will take what I can get. The alternative is scary, like not shaving or buying new clothes because you never go out, or training yourself not to see the cobwebs and the dust gators. (No bunnies here.)

When I put away the high-rent gas powered Craftsman Brushwhacker™ last fall—you know, one of those noisey gadgets for whacking weeds—it was running better than ever, though not without a struggle. After having the fuel line replaced by an otherwise useless Taos repair shop (“We did that, but it still won’t run.”), I’d resorted to the internet. My hunch was that it simply wasn’t getting enough gas. Internal combustion engines are funny like that, and it’s the first thing smart guys look for. The thing has an actual carburetor, Zoroaster be praised, which means there’s a tiny screw to adjust for the fuel-air mixture and another to confuse you. Imagine my joy, however, when I discovered that unlike the case of the last carbureted automobile I owned, a ’67 Saab V-4, touching that screw was now against the law. That’s right. Only an authorized repair facility like the one that had just failed me possessed the special tool needed to get a grip on the modified screw was allowed to do the work, according to the EPA. The rationale is that millions of people tinkering with their tiny little engines, all of which had been perfectly adjusted for life at the factory, would pollute the atmosphere and kill us all—this after mandating adding ethanol to gasoline in sufficient quantities to make a lot of them run quite badly. This being America, however, I found a workaround online.

It couldn’t have been simpler. All I needed was a certain size of the kind of wire connectors you crimp tight with a pair of pliers, and I was good to go without the “special tool.” A few degrees of counter-clockwise nudging on the screw, and the little two-stroke screamed like a banshee. Success! I tidied up our rented estate, drained the remaining fuel, and stored it in the back of my pickup truck for the winter.

Somehow it got to be spring and then June. I hauled the Brushwhacker out of the truck, put freshly doctored gas in the tank, and yanked ten minutes on the starter cord. Nary a pop. The thing was as inert as a Monty Python parrot. It would have made a good redneck bass boat anchor. But here’s where I got clever. Namely, I did nothing but let it sit under a tarp behind the house for two whole days. Maybe there was a tiny spider in the fuel line and it would dissolve, but I was really trying to keep from going postal.

On the morning of the third day, I remembered an old carburetor trick for starting dead cars: to see if the motor’s getting any gas, just pull the air cleaner off and drip a little down its throat. On the evening of the third day—yes, I purposefully waited—that’s exactly what I did, and it fired right up! I don’t know how long it would have run, since I shut it down immediately, but the prognosis is good, and now I can pretend to clean this place up outdoors.

I’m proud, though. I know stuff the kids don’t know, like what a carburetor is, or how to catch a chicken with a chicken hook. Both of these would stand me in good stead in Cuba, say, where I am not, but hope to visit before Yangqui car freaks buy up all the vintage wheels. Plus, I’m glad I waited: the symbolism of the three day interval is important! Wait before you roll away the stone, then wait some more.

Otherwise, you have to work.