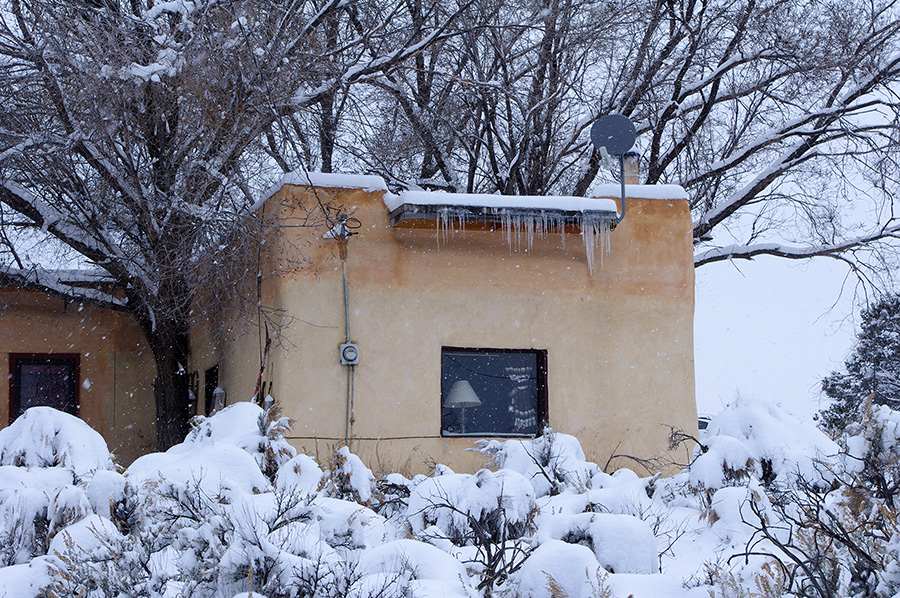 It’s beautiful but we can use some sun »Buy This Photo!«

Doom sucks. I ought to know, I’ve been scared for years. We’ll get to that part later. On top of everything else, the ten day cycle of repeating snows—it seems like a lifetime—finally pounded the self-respect out of me. The road, you know. The cratered two hundred yards of dirt the county in its wisdom decided to stop plowing. After being stranded here for two days, we got the car out yesterday so we could buy some groceries. On the way back, I got very badly stuck. The heavy snowfall, well over a foot, had turned to icy slush our poor old tires couldn’t grip. It took almost an hour to finish the final twenty yards, and I don’t know how I did it.

The stress was already murderous, inconceivable in normal life. Getting stuck was confirmation of the overwhelming sense of failure that had overtaken me. That I hadn’t accomplished this or that and gotten us into a better home, that it was my own immoral “fault” that we were vulnerable to traditional (if not recent) winter weather at seven thousand feet! When I walked back into the house, my wife said, “I’m so sorry,” thinking the car was still crossways in the road the way she left it when she hiked home through the mud to rescue the groceries. I told her I’d gotten unstuck, then fell apart completely, crying and screaming and throwing things. Everything was over, all at once. I couldn’t believe I’d trapped us in this goddamn awful stupid place where nothing works and crooked politicians let the people go to hell. Perhaps that rings a bell, eh? There’s a kind of satisfaction in breaking down, too, because it feels so true. I can see why people commit the most horrible crimes and have to kill themselves.

The afternoon descended into toxic brooding interspersed with bouts of panic. I even counted all the money and added in what she’d be getting from my insurance if I fell into the gorge. Good God! How far gone does someone have to be to think that this would be a comfort?!

Around midnight I allowed myself a bath. Right there, this was progress. The place we’re in used to be the dead landlord’s home. He was a tall fellow, easily six foot five or six. The bathtub is a special order oversized affair. (On winter nights it saves my life, and I will miss it when we’re gone.) While I was lying there reflecting on my “miseries,” I realized I had made them. That I had drawn them to me, in effect, by burdening my stupendous life with guilt and fear and bullshit out of all proportion to what ailed me. But that’s just one epiphany. The other is, the underlying energy is real. It isn’t going anywhere and thunders right along. My father was a pilot. Before he flew, he always read the pre-flight checklist. That makes sense when you’re depending on machines, but organisms have to bet on life. My breath goes in and out all by itself. Try doing that intentionally and see what happens.

In the morning, I went out to buy new tires. Usually this involves extensive research on my part. Every aspect, ever angle, warrants hard evaluation. I read reviews and study everything from sidewall stiffness to rolling resistance. Finally I choose my tires, and I also watch them like a hawk to see if this or that reported negative appears. (What do you know, it always does!) This time, though, the need for speed was paramount. We might not have gotten stuck the day before with decent tread depth, and the winter isn’t over.

I called ahead to see what brands the dealer had in stock. He mentioned one I’d never heard of, new from China. I sort of liked the name (BlackLion), but China? Oh no! That put me in another zone. I’ve seen the plumbing fixtures, after all. The tires were cheap, though. Almost too cheap, clucked my inner chicken. A minute on the Google, all that I had time for, showed me that my favorite tire geek website didn’t sell them, aargh. Farther down the page, however, were a couple of guys in Baltimore who were happy with the tires. But did they wear well, what about the steering, did the gas mileage go up or down, how were they in snow (!), was anything about them even cool at all? Who the hell could say? All the Baltimore reviewers cared about was that the things were “quiet,” and I imagined old Jewish guys from Reisterstown or Towson who drove their Buicks to Ocean City once a year. But there was also lightness in the air: the dealer told me come on down, with no appointment, and they’d have me out the door for just four hundred bucks with lifetime balancing and flat repairs. This felt like summer vacation, and I needed one.

You know the rest, I hope. I got the tires, drove straight home, and only slid a little bit. They look like tires are supposed to look and hold the car up off the ground. Life goes on in Taos and forget about the goddamned snow. Forget about the planning and the scheming, too, and fear of stuff that hasn’t happened. The most important thing right now is my honey’s sweet hot face. I kissed her when she staggered from the bedroom in the pre-dawn gray and know whereof I speak.