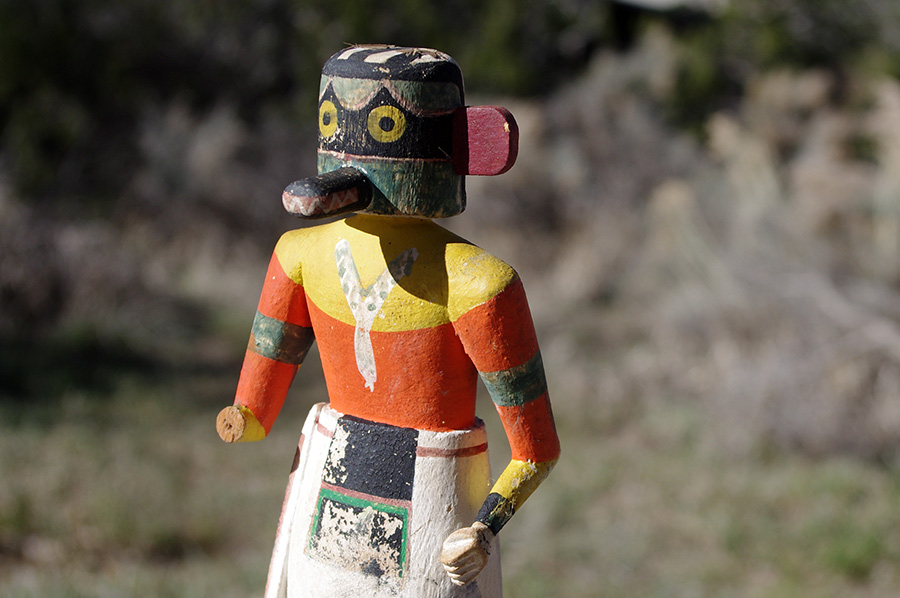 They came hurtling down around a blind curve in the singletrack trail, two mountain bikers bent on mayhem. With no time for me to step gracefully out of the way, I leaped into the sagebrush in a single bound, badly scratching my leg. “You’re all right,” the lead idiot yelled as he shot past. Whatever does he mean by that, I wondered? There would have been no way for them to pass if I’d just stood there! He’s lucky I’m not some dude on a horse, a lady with two big dogs, or a family with kids, I thought. I’ve seen all those combinations on that trail. Interestingly, the same stretch where I fell down twice before, one time landing full-out prone, flat on my face, miraculously missing rocks and cactus. There’s something special about the spot, one of those open windows to Something Else. When you pass by so quickly, you don’t know.

Like I did, when I cleaned the kachina doll. It’s just a cast-off—missing pieces, feathers gone—a damaged relic I rescued from the dead landlord’s apartment after seven years, but definitely authentic. Seven years since he died and the place was locked up, seven years with the refrigerator running (on low) that I was paying for, the apartment being on the same circuit as our house. Seven years, and his niece said I could take whatever I wanted. It sure looked dusty, though. I wondered if the paint might be water-soluble and tested it first with a wet finger. No? All right, then, under the faucet. I’m so clever. Of course I noticed the pigment on my hands as I carried it outside to take a picture. Oh, Christ. It still looks cool, but I know what I did. “I hope you’ve learned your lesson,” my wife said when I told her. Her look suggested she expected more from me. She’s big on ritual and sacredness, that one. Everything little thing one does has great significance.

So back to formatting the next book, which is almost ready to go. See what happened there? Good. I hope I do.