More Goods of the Dead 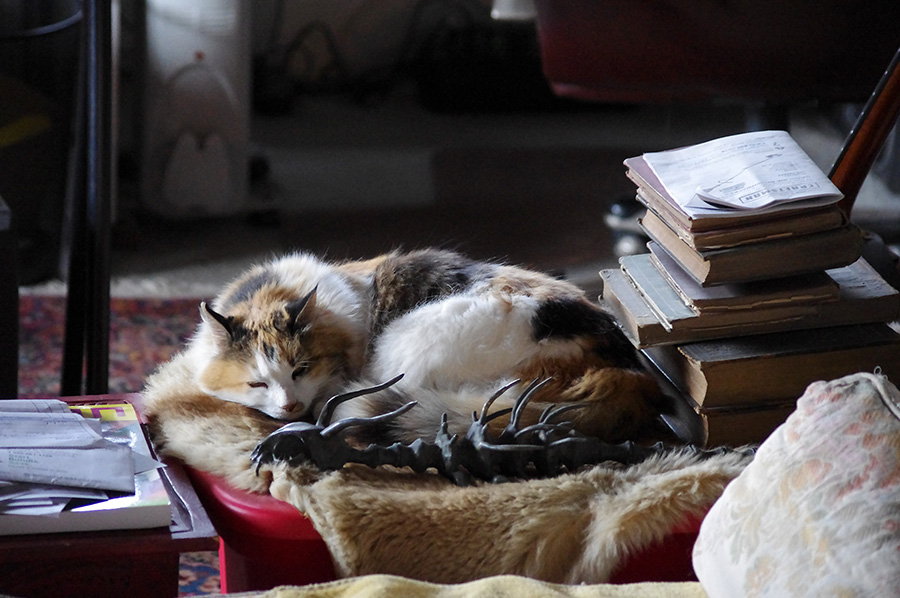 No wimpy nonsense in my house »Buy This Photo!«

This keeps happening to me. Someone dies, and eventually I get stuff. Not that I mind. I come intensely alive in the presence of unopened tombs. Also garages, old suitcases, boxes, and drawers.

Callie the Wonder Cat is curled up here with a bronze sculpture of mine (“Catbeast #4: Caterpillar from Mars”) and some goods of the dead I acquired two years ago. The pelt she’s lying on is a wallaby skin my late aunt the Army nurse brought home from Australia in 1945. It and the books are part of the loot I shipped back from Maine in May of 2013 after she died. The red plastic bin underneath is full of loose photos, albums, and other family items from her estate. I inherited everything in the house, but had to fly up there and auction off the big stuff. What an immersion into a different culture those two weeks were! (You can read about that adventure here.) And I got stuff, oh yeah.

As briefly as I can: there’s a tiny one-room studio apartment at the end of our old adobe building where the dead landlord used to live. That would be the remarkable Uncle Dale, who died seven years ago. (Not my uncle, but let’s call him that.) He built the apartment for himself on top of the septic tank, a fateful decision whose effects linger still. About a year after he died, a crew of family members from Texas showed up to claim his Japanese antiques and arrowheads. Then the place stayed locked up tight for six years: the building really is falling apart, the apartment’s illegal to boot, and nobody cared. I’d walk by once in a while, look in through the window, and shake my head at the dead man’s cap and jacket hanging on the clothes tree, but that’s as far as it went. Who knew what might be going on in there when mice and squirrels come out to play?

But last month my wife found out she had to leave her piano studio and move to a new one. There’s a nice leather sofa of hers in the old place that we’re bringing on home, and we have to get rid of the one that’s here now. It actually belonged to Uncle Dale. I got permission from his niece in Pennsylvania to store it in the long-abandoned studio apartment, but I needed a key. She sent one. Next I needed a locksmith.

Since then our plans have changed—namely, the movers will make the old sofa go bye-bye—but on behalf of Dale’s niece, I did look around, wary and worried by all the mouse poop. Hantavirus, you know. Nonetheless, of possible interest, I reported, were:

…a dozen hardbound books about the history of the American Indian, a small wooden box of hand tools (hammers, wrenches, and the like), a couple of small bronze figurines in Greco-Roman style, about four inches high, and a few beat-up but fascinating Native American items, including a broken kachina doll, a small pot (about four inches wide) glued together from fragments, a crude clay figurine (these last two probably from this property or nearby), and what looks to me like a small replica Mayan or Aztec piece that’s also been glued together from fragments.

None of this is valuable, though the books may well be out of print and hard to find in other circumstances, but the lot of it is passing strange. I told her I would make a modest offer for the things listed above, which my wife thought was pushy, but that’s how you get stuff…and I got it! The niece (our landlady), grateful to have anything taken away, emailed back and said I could have everything in the place, including the artifacts, books, and a cute Jøtul wood stove. No money, just take it.

I knew this would happen. It’s part of the plan.