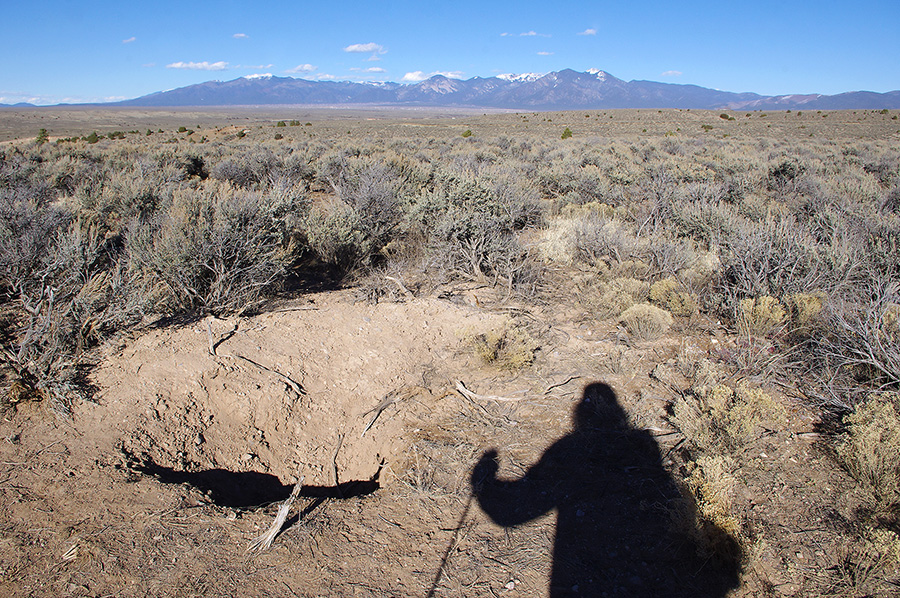 Walked right past it at first. Wow, that’s quite a burrow, I thought. It was definitely large and obvious enough to make me not want to hang around. Coyotes are always the first thing I think of, skunks second, raccoons third, then rabid badgers, spitting cobras, and so on. It’s probably possible to stand beside a hole like this and not have the mighty puma sink his fangs into your larynx, but it isn’t guaranteed. Neither is it written that you’ll never have to pry a hissing possum off your ankle. This was briefly on my mind because I decided to turn around and go back for a picture.

This thing is right beside the trail. The entrance was cloaked in shadow but might have measured a foot across. No more, if that, at the bottom of one impressive hole. I can’t imagine any animal choosing to dig a burrow out there. Most of the ones I just mentioned don’t live in the sagebrush, of course. Just the coyotes, really, and rabbits. But damn, not without water, not unless the buggers hike all the way down to the Rio Grande. I wouldn’t put it past them, either. The coyote above showing off to make a point has not been born.

Next post: Valentine’s Day Eve on the Rio Grande