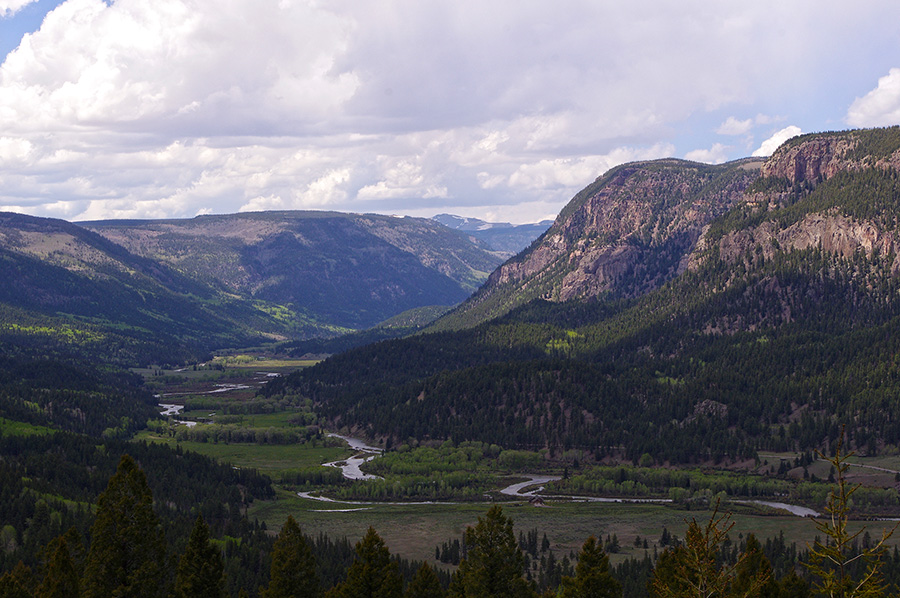 “Look! Look! There they are!” The llamas were grazing the green grass and scrub close to the road. I didn’t have time to slow down and we whizzed right by, but at least we saw them. (Tony’s llamas, by the way. A guy named Tony owns the ranch there on the other side of the gorge, and they belong to him.*)

We climbed past the llamas and ascended the sloping plateau. The high desert passed for green with clumps of grass among the sagebrush multiplied a million times. The sky was huge with white clouds in the deep blue emptiness. Although it was mid-morning on Saturday as we aimed for Tres Piedras, the long straight road stretched empty behind us in the rear-view mirror as far as I could see, and there was no one else ahead. Just desert, sky, and mountains. Except for a stretch of US 84 south of Chama, we’d be virtually alone for the entire day on a 200-mile route that reached 10,000 feet four times.

I was totally in my element. Driving in the mountains is a glorious high when you can go as fast or as slow as you want because the road is empty. We even stopped to pee and didn’t have to watch for cars! But what impressed me the most this time was how green the mountains were. The high country valleys west of Tres Piedras were lush and wet, with running streams that snaked through fields of yellow flowers gleaming in the sun. From Chama on, there was water everywhere. The Conejos River (pictured above) ran high and fast.

After all this time in Taos, rediscovering biological value in the landscape was a revelation. To think that one could plant a thing and simply have it grow… For the first time in a long while, I found the presence of the water reassuring and didn’t want to leave. What that means for my own future, who can tell? But I have to say that coming back to Taos was something of a letdown. Oh, the vistas were still grand. It was just the sight of all those houses in the sagebrush that made me sad, until I remembered that I didn’t own one, and I decided then that I was just about the smartest man who ever lived.

* There’s a joke here, but it takes some work.