The Thing That Wouldn’t Die 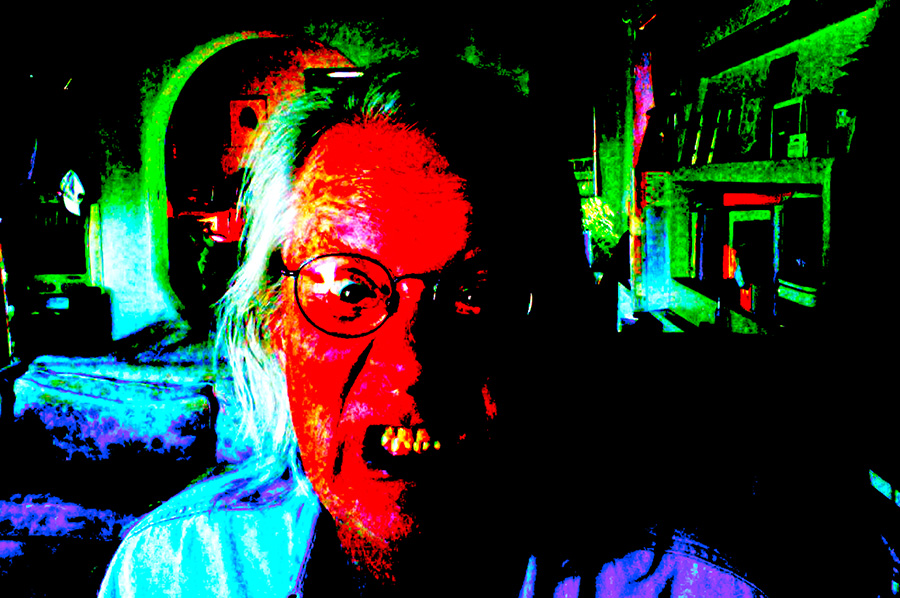 More distracted than angry, but this shot will do

What was I thinking? Of course it’s related to the book, i.e. The HELEN CHRONICLES: When Your Mother Falls Apart, the annotated collection of blog posts that tell the story of my mother’s chaotic last few years under the influence of dementia, Alzheimer’s, paranoia, schizophrenia, delusions, and hallucinations. All of a piece, too, those stories, today, and the still-warm detritus of the old family saga in Tucson. Open a channel, The Thing walks again.

This time it’s my brother, the emissary of sad, he of the easily-addicted persuasion, the man with no teeth who can’t wear his partials because they don’t fit, a stranger to math and a sucker for the ages. To briefly recount, he lives on Social Security in a trailer deeded to him as part of his inheritance after my mother died. The rest of that gift, a not inconsiderable sum, came and went in a few months. Early this spring, however, my three siblings and I each got a tiny fresh new bit of money from our late aunt’s estate. In an forgivable moment of idiocy, I agreed to be trust agent for my brother’s portion. She had his number, all right, and set things up so that he gets twenty percent per year for five years instead of the the whole thing in one hunk. As official agent for the trust, my job is to send him one-fifth of the total each year, which I did for the first time around April 1st. All gone now, of course.

A few days ago he called me at 7:30 a.m., 6:30 a.m. his time—hmm—to ask for an advance on the 2015 check I’d be mailing at the end of the year. “Four or five hundred,” he said, due to being “overextended.” This was outside the rules and I told him as much, and then quickly relented and said I would send it. It’s his money, anyway, right, and I wanted all the whole thing to just vanish, so I scribbled a check for $500 and put it right in the mail. No, I didn’t write “for deposit only” on the back of the check. So?

Things being the way they are, when the phone rang last night at 10:30 p.m., I saw it was him and braced for the worst. Nothing so terrible, though, just incomprehensible. He asked me to please send another check, “just for four hundred this time,” (?) because he’d lost the first one. Oh yeah. Looked everywhere, he did, but just couldn’t find it. Speculating that it might have blown out of his pocket, he said, “It was really windy here today…”

I told him I’d see what I could do and waited until this morning to cancel the check. In my haste to be rid of the aggravation, however, I’d forgotten to write the date in my checkbook and couldn’t use the online form on my bank’s website. This meant I’d have to take time out of my day to drive to the bank and explain things in person. Well, fuck it, I thought. Enough is enough. He can just go back out and find the damn thing. Look harder, you know?

If I do cancel the check and send off another one, it’ll come out of next year’s twenty percent. He’ll be eating his future, not to mention that my duty ends in 2019. I left a phone message to tell him all this. While I was still on the line, I heard the beep of an incoming call. I finished my message and looked at the phone. It was him again, all right. I put down the phone and let it ring until it stopped.

The check still hasn’t been cashed. He’ll look most of the day and then call me again. He doesn’t even know how much he needs. I have the guy’s money. I could ignore my instructions and send him the balance, but I know what would happen: screw-ups, more phone calls, pleas, and wasted emotion. The same flesh and blood, what can I do?

A tale from the crypt, if ever I heard one.