I‘ve seen some strange things in my day. Had a deputy sheriff security guard staple a ticket stub to my collar at the Sex Pistols gig at Randy’s Rodeo in San Antonio. Saw Captain Sensible of The Damned do an encore in the nude at a nightclub in D.C. And then there was the time when The Cat with the Foaming Green Brain™ attacked our lovely country homestead. (Guess what I had to do.)

But in the middle of our momentous scenic road trip yesterday, we stopped in Chama, New Mexico for lunch. There’s a story in itself. You don’t know what it’s like. Eighty-year-old tourists come to see the train and have a grilled cheese sandwich. Guys juggle bears in winter to keep warm. All around it’s beautiful, of course, with mountains, trees, a river, and green grass, and then the screen door slams bam-bam in the wind in the little cafe where they don’t serve any alcohol and even I begin to feel a little safe, until I step outside and see a ’64 Corvair convertible!

How insane is that? Considering where we were, especially, it might as well have been a golden camel on a stick. And then I looked across the street: oh help, another one! The later model, ’65 or ’66, a clean red coupe with killer wheels. [Look beyond the steering wheel.] Dear god, another down the street the other way! And yet a fourth one sitting in the shade! Aaagh!

Not that I care about Corvairs all that much. Although I am a car nut, I’m more a student of the strange. That, and these things are a symbol of my youth. I even drove one once! My god, I’m fucking old. There is an explanation, as it turns out—not for me, but for the cars and maybe for the “tourists,”eek—and I’m sure no one will mind my showing this official poster, which I wish I had: 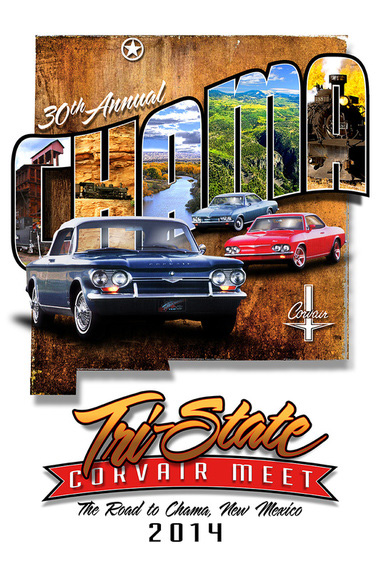 Anyone who loves a car that much can be my friend. There’s also a fine exalted weirdness here beyond the mere inherent. (The curious are urged to dig deeper on this page.) For one thing, you’ll notice there isn’t any third state mentioned for this “tri-state” event, only New Mexico and Colorado. The third state was supposed to be Utah, but the Bonneville Corvair Club never actually signed on back in 1976 when the whole thing started.

They’ve been holding the annual meets ever since with just two sponsors but kept the Tri-State name.