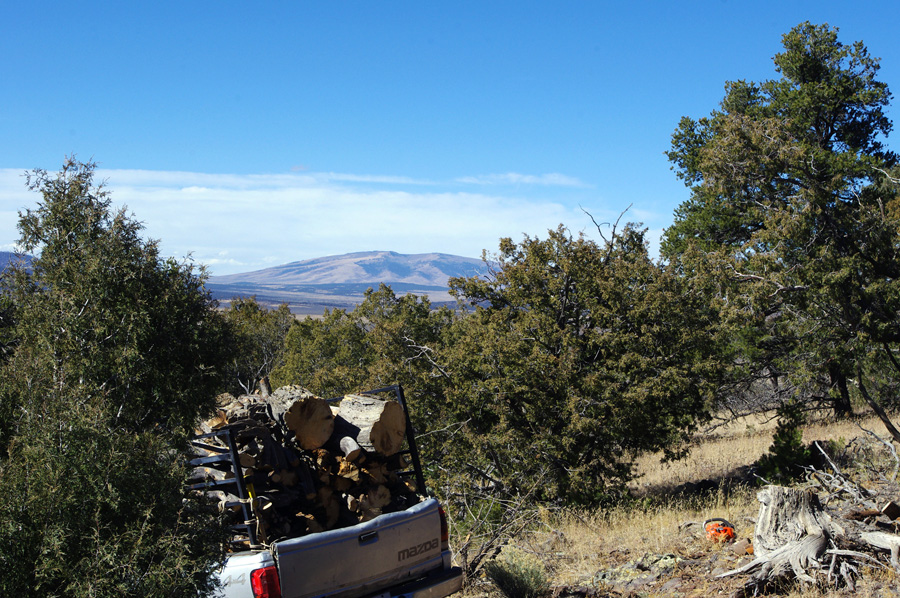 A couple of years before we moved to New Mexico, we were driving through el Norte on a trip. An outing north of Taos brought us to the Wild Rivers Recreation Area (now part of the Rio Grande del Norte National Monument). I was astounded by the remoteness of the place as well as the indescribable beauty, and most particularly by the fact that no one else was there—coming from the East, I simply couldn’t believe the gift of such a thing.

At the far end of the gorgeous paved road in the midst of all this peace and splendor was an overlook from which one could gaze down into the Rio Grande Gorge eight hundred feet below while looking over the smaller canyon of the Red River toward the mountain range beyond. A thunderstorm had just passed, leaving hail all over the ground. The bright sunshine that followed made steam rise off the asphalt on the road. Miles away, I could see lightning striking the distant peaks. As I stood there in wonder, I felt an enormous joy filling my heart. It was as if everything I’d ever done or worried over was forgiven, and I started to cry. The way I put it at the time was, “It feels like I’ve come home.”

The next block of years were anything but peaceful, though. Accustomed to self-doubt and lost in fear, I lived most of that time inside my head and manufactured crisis after crisis. Only rarely did I feel “at home.” Instead, I blamed myself for everything I figured had gone wrong. Remembering the earlier incident at Wild Rivers, I came to understand that home for me was something spiritual. Yet in all that time, a physical home seemed out of reach, no matter where I might place it in my fantasies.

Yesterday I went out with a friend to cut some firewood. Magical piñon this was, gray storm-felled five hundred-year-old trees cured naturally in the sun and cool dry air. There is no better on this earth. Between the truck you see above and the mountain in the distance is no human habitation. (Let that sink in for a moment, zero as in none.) But there are antelope, elk, mule deer, bears, and mountain lions. Eagles and volcanoes. Sagebrush, cactus, juniper, and cedar. Rocks and caves. Great mystery. It takes an hour and a half to get here from what passes for civilization, driving rutted dirt tracks you’d never use unless your 4WD is already good and beaten up.

The wildness reminds me of what I first experienced at Wild Rivers sixteen years ago. There’s an energy or presence that speaks to something very deep. My friend says he’s “addicted” to pure Nature and the vistas. He cuts wood on the same mountain every year. The elk are so used to him, they stand and watch while he runs his chain saw—sometimes he has to drive through herds of them just to get there.

Consider where appreciation leads. The man and his wife arrived in Taos seven years before we did. They built a simple home outside of town up near the mountains, lived there with no water for six months until they could afford a well, and now have roots and some security. The richness of their lives is undeniable. They have great trust in Source.

My training was in the opposite direction. At least I see that now and finally know which messages to ignore.

Previous post: Life on the Frontier: Walmart and the Wood Thing