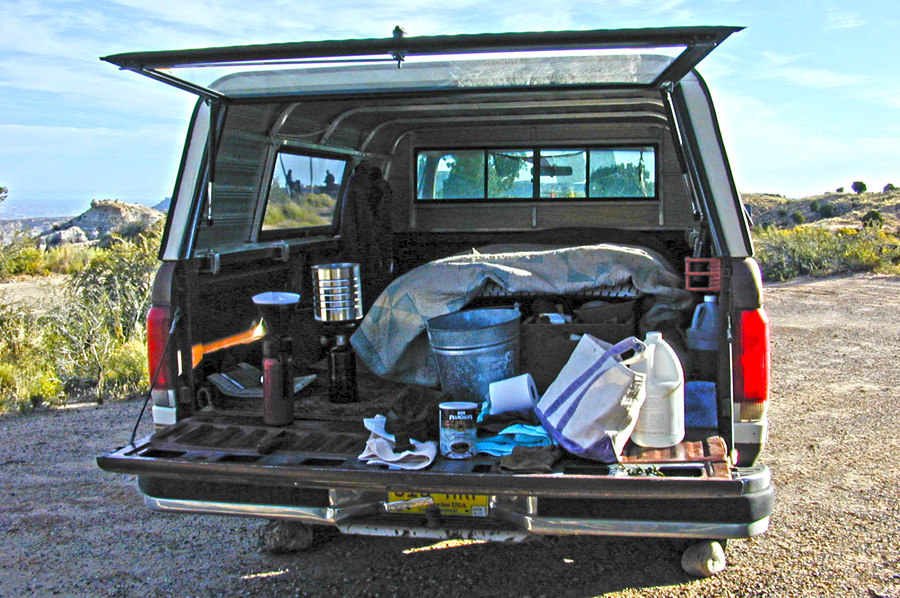 Oh, my God… I turned this up looking through my photo archives for September 18th. That’s my ’87 Ford F-150 when it was in good enough shape to be my rolling motel. There’s the Swedish camp cot with the antique quilt for bedding, the thermos with the drip coffee cone on top, the single-burner propane stove (I’m boiling water in that silver can), the prayer flags hanging in the cab, the rocks behind the wheels for don’t-roll-into-the-abyss insurance. (Yes, there was a mighty hole in the earth nearby.) If you squint real hard, you can even spot the oriental carpet on the floor. I knew how to travel in those days.

My wife had moved to Iowa to find work and help take care of her mother. I had less than no money and was suffering hard. How did I ever pay for the gas on this trip ten years ago? At any rate, I’d decided to visit Chaco Canyon. How could I live just a few hours away and not go see the mysterious place if I had a chance, no matter how messed up I was? (That’s not where I took this early morning photo, but Chaco isn’t far.)

I got to Chaco about 90 minutes before dark. An old pickup truck is no grand touring machine, and I was exhausted. To my horror, the campground was almost full. I hadn’t anticipated a lot of people and wanted none, but I found an empty slot next to a tired old picnic table and backed the truck in. There were kids riding by on those plastic “big wheel” trikes and teenyboppers running back and forth. A radio was blaring. Every now and then an SUV would rumble past, and there were mountain bikers whizzing down the road. It was noisy just from all the nearby voices. No way was I going to be communing with the ancient ones, more like I’d taken a detour to Hell. I stayed about thirty minutes and left.

If you’ve never been to Chaco, you have no idea how remote that part of New Mexico is, and there I was heading out with less than an hour of a daylight. Boy, was I pissed. When I finally got back to a paved road, it was almost dark. I pulled over to look at my map and found a campground of some sort that looked to be about twenty miles away. The only problem was it was out of my way, up toward Bloomington, in the wrong direction if things didn’t work out and I had to drive back home in the dark. There needed to be a legitimate camping spot because of how lonesome it was, if you get my drift. I couldn’t have afforded a motel, even if there’d been one, so off I went.

It turned out to be something called the Angel Peak National Recreation Area, I learned when my headlights hit the sign. There was a rolling road that wound around on top of a mesa, and every few hundred feet was a little campsite, maybe twenty in all, and most of them were empty. I was saved! But oh my God, how isolated and remote. The wind blew cold that night and carried not a trace of my world with it.

In the morning I explored a bit and was fairly well impressed. If you wanted to stagger off into the rocks and die, it was as good a place as any. Maybe better, only what were those odd muffled noises? Imagine my surprise to find a building behind a fence and “KEEP OUT” signs—the oil and gas industry was just over the hill! I don’t remember what it was, the thing inside the building, but it groaned and hummed a while, then went still until you thought the show was over and groaned and hummed some more, like an old refrigerator. A pumping station perhaps, not that the answer matters. The spell was broken, and I hit the road for another campground way up in the mountains that was on my way back home.

That place was gorgeous and green and no one was there, but by now I was too good at quitting. Maybe four hours back to Taos, I figured, with a hot bath and a bed. After an hour, I broke camp and fled!

The question that arises at junctures like this, when you find an old photo that defines who you were and still mostly are, is what in God’s name did I do for ten years?! How is it that so much repeated itself? What did I do or not do that I still have that truck?

If I drop dead tomorrow, what do I say?