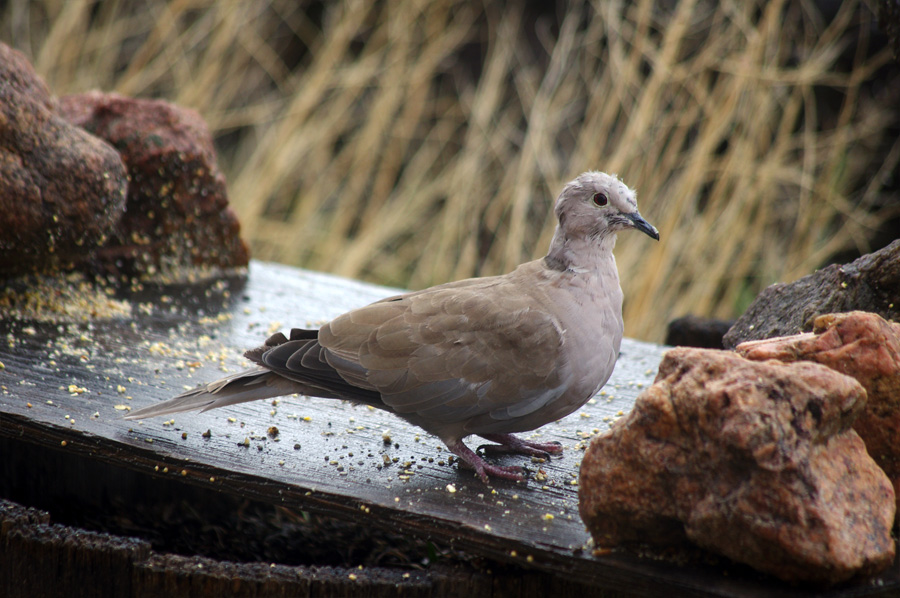 Funny he doesn’t look wet. Everything else is.

I shot this picture of a collared dove through the living room window in the rain. My camera spent the night in the car and got chilled down, so as soon as I brought it indoors, the lens fogged up. That may or may not have anything to do with this photo. I just mention it because the notion of something “fogging up” in northern New Mexico is kind of exotic.

But the poor guy got there too late. The ground squirrel ate all the good stuff, leaving him with whatever crap the birdseed companies dump in for filler. He seems to be doing the late summer molt thing, too. Either that, or he has mites, and he doesn’t have a mate. Or she doesn’t. (I wish they’d wear name tags.) Either way, that’s kind of sad if you’re a dove. How can you get a date with a head like that?

The day after I saw this, we had a bird in the house. This represents my wife’s most primal fear. We were sitting in the living room with the door open, just a rickety screen door in place so we could listen to the rain, when I saw a rufous-sided towhee walk in through the three-inch gap at the bottom of the door. Most towhees are too stupid to live, and this one almost didn’t. At this point the bird was just sitting on the doormat wondering where the hell he was, and the cat hadn’t seen it yet. That’s because the beast was sitting on a towel in my wife’s lap.

“Okay,” she said, as brave as I have ever seen her, yanking the towel out from under the cat and putting it over her head! The cat jumped to the floor, the towhee took off, and everybody got acquainted real quick. I propped the screen door wide open, but the idiot towhee took to ricochetting off the walls. It was me chasing the cat chasing the bird. She got a piece of him as he ducked under my guitar amp, but then I grabbed her and shut her in the bathroom. All this time my wife is sitting there motionless in her chair with a towel over her head. I was grateful for that. Meanwhile, the towhee was getting around. The avian genius ended up in the kitchen, where he bounced off the window and the fridge and landed on top of the washing machine to catch his breath. It was suprisingly easy to reach out and grab him—this is a towhee, remember—after which I tossed him out the front door and watched him fly away.

I’m a good bird grabber. I don’t know why. When we lived in San Cristobal, that crazy wild mountain village, there were no screens on any of the windows, and sometimes hummingbirds would fly into the kitchen. These were smart little bastards, though. Instead of trying to bust out, they’d just hover up against the ceiling and wait for me to stand on a chair. Capturing them was nothing, and they’d calm down immediately in my hand. (I’ve seen moths that would put up more of a fight.)

A hummingbird in your fist is such a wonder. It doesn’t weigh a thing. You can’t even tell it’s there.