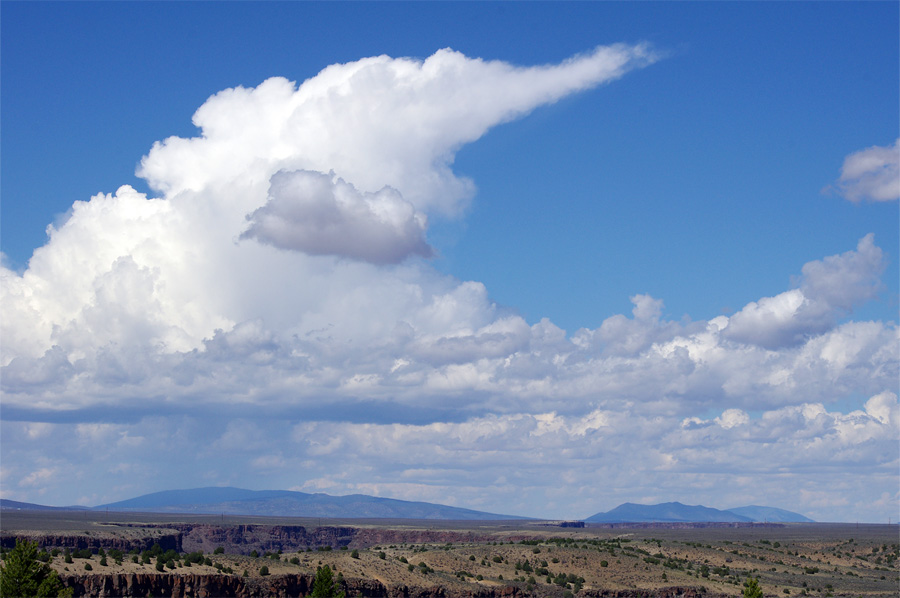 I‘ll never get over New Mexico skies. If we ever move away, I’ll miss them terribly. It’s possible there are others—this is one heaving big planet—but in my perversity, I’ve not allowed myself to wander more.

Taos is a strange place, though. A very strange place. The sky and wonders of Nature are one thing, the rest another. It’s not a “nice” place, either. Anyone who tells you that is mad. I’ve often commented on this. (Just ask D.H. Lawrence.) It’s probably easier to be Hispanic or Native in the terrible high desert; they have community and culture going back four centuries and unknown millennia respectively. Awfully old, for being in the supposed New World. The rocks at the bottom of the gorge predate the continents. Extinct volcanoes litter the vastness. The chthonic energy is strong. Light and shadow are both there in plain sight. The spirit of nature and the spirit of evil stand tied back to back.

“Just look at that sky!”

And in the fourteen years I’ve been here, there was a triple murder at a gas station a mile away, two men kicked a kid off the gorge bridge, someone’s German shepherds killed and ate the lady of the house, an enraged citizen murdered a man by pickup truck in front of a local bar, and others have jumped, fallen, frozen to death, or been executed unseen in lonely places nearby. All this, and we haven’t even gotten to real estate, kickbacks, nepotism, rich idiots, fake hippies, gluten police, green Subarus, marketers, gamblers, and charlatans of every stripe. I’m sure I’ve forgotten all manner of gruesome, horrible things. Someone once even stole the left taillight from my ’87 Ford F-150, possibly for comic relief. The contradictions are stark, at any rate, whether you believe the metaphysics or not!

Doubtless the same kinds of things go on in your home town. Iowa, which I have some familiarity with, is possibly a good example. Things happen in quiet farmhouses and on back streets of the city that no one talks about. People are also mostly white and prosperous and have good teeth, supposedly. But hang out at a highway rest area or your local mini-mart and stay open to the vibes. It’s all there, though some places are darker than others.

So Taos doesn’t bother me in that way. I came for the Nature in any case, and that is spectacular. (Read this from someone who gets it, though she doesn’t live here.)

“Just look at that sky!”

All right, I will. Deep blue and clean and impossibly tall, over lizards and gorges and condos and all.