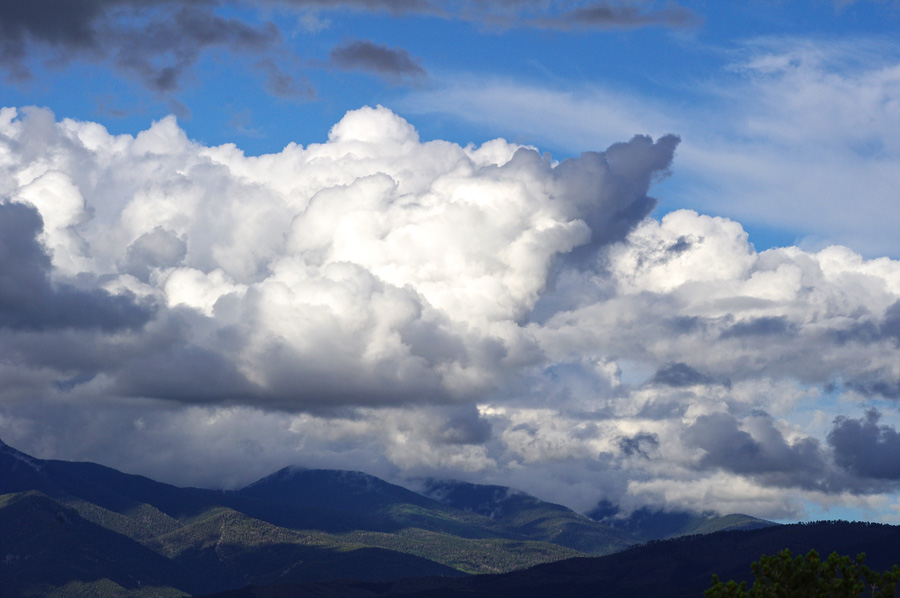 The rain is strange but welcome. About the time I decided everyone was doomed and it would never fall again, what did we get but dumped on. Not so much in Taos, actually, but north and south of here. It’s so damn sneaky, too.

This afternoon, for instance, my wife drove off to her studio, leaving a washer load of laundry on the line. The sun was shining. At times like this, it’s my duty and a privilege to watch for rain. I was sitting at my desk. (I’m always sitting at my desk, but never mind.) There was alternating sun and shadow, so I didn’t get alarmed when it dimmed outside my window. Then I heard a couple of knocks, like someone rapping on the skylight or a window. Three, four, five knocks. Then a knock-knock. I stared outside and everything was normal. I kept staring. A single jumbo raindrop hit the windowsill with a BAM. So that’s what was knocking on the skylight, I thought. I couldn’t believe how loud it was.

I grabbed the plastic laundry basket and bolted out the back door to head down to the acequia and the clothesline. There was a tall gray wall of rain across the valley. Nothing here but isolated giant drops and HAIL, pea-sized stuff that came down heavy all at once. I got to the clothes. The drops were coming faster now, and three of them would get you wet. It was like being water-ballooned by God. Hail was falling all around. I yanked the laundry off the line and stuffed it in the basket, which was filling up with ice, and ran back to the house. Naturally I had to build a fire. It was in the 60s anyway, no problem. Before I got the underwear and T-shirts on the folding racks we set up beside the wood stove, the sun came out. I looked out the window and decided to stay with the fireside drying. Later that afternoon it did rain again a couple of times, but much more lightly.

I’m almost out of firewood, of course. There’s just the dregs from last winter. What that really means is that what is left is largely pitch-wood that I split up to use for firestarters. But the wood is soaked and it’s been sitting out for six months. It’s darkened by the water, and I can’t tell what is really pitch-wood unless I split the wood and sniff. But I’m a lazy boy and grab a couple of armfuls. Who wants to split wood in the mud?

I get a fire going and lay a couple chunks on top. Fifteen minutes later, one takes off like napalm and I have to shut the stove down. Eventually it starts to die, and I open up the draft to bring the heat back up. Up and down, up and down. Every time I fiddle with the stove, I have to move a rack of laundry. The clothes themselves need constant shifting so nothing melts but still gets dry. The whole thing took all afternoon.