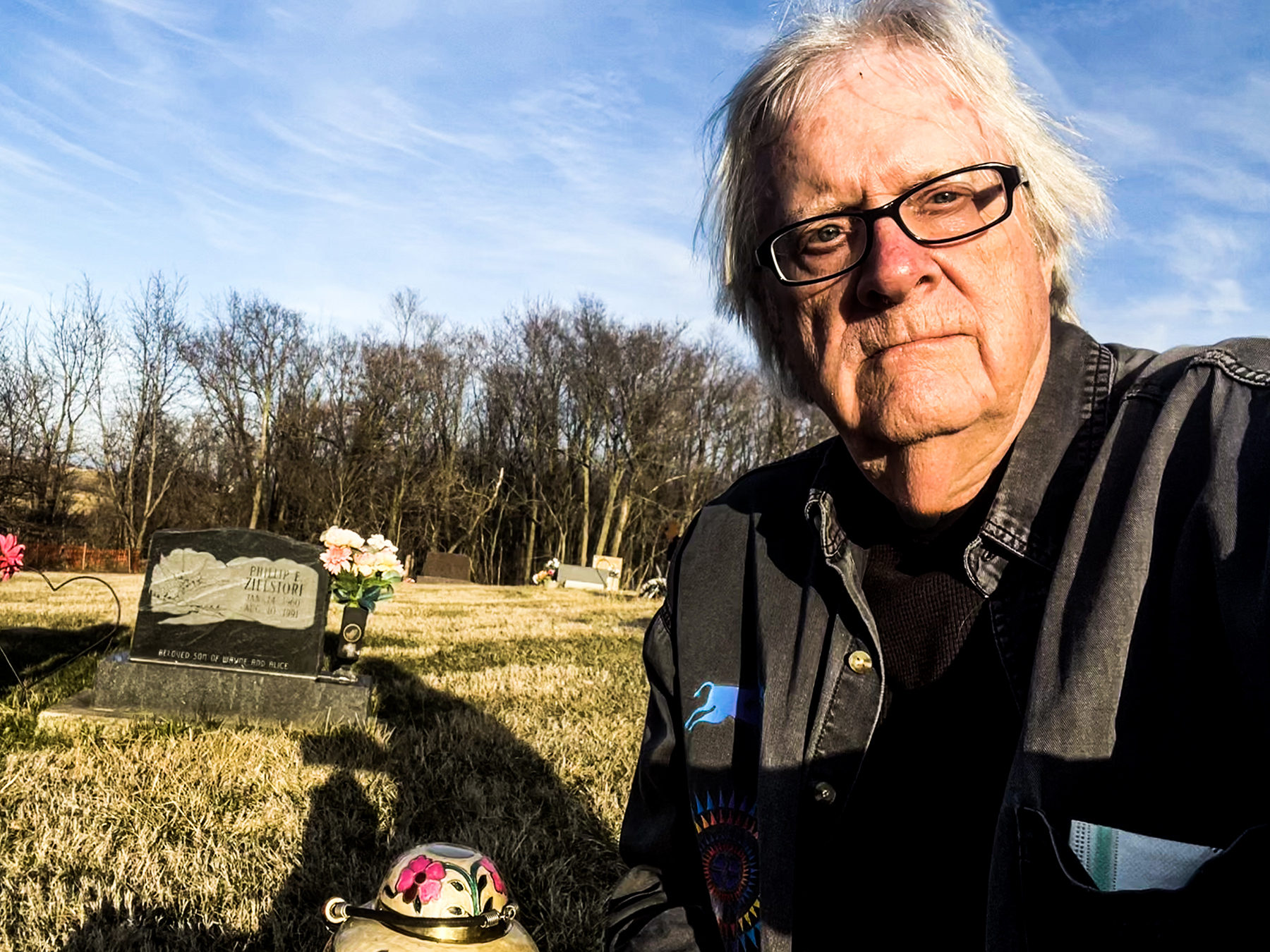 At the Keota Cemetery the evening before the burial. Oh that face.

“Hi, I’m the digger,” the big guy said as I arrived at the cemetery in Keota, Iowa a little before noon on April 5, 2022, one year to the day since Kathy died. He looked the part. (I wasn’t dressed like in the image above. That would be the day before, when I pulled in around 7:00 p.m. straight off the road from Kearney, Nebraska. My Iowa motel reservation was the next town over, but I wanted to see the grave site first.)

The rectangular hole was already dug but fresh, three feet deep and plenty wide. A wheelbarrow full of excavated prairie soil was parked nearby. The ground was squishy-wet, with water oozing from the grass with every step. I peered into the hole: to my initial dismay, the bottom was filled with a good two inches of muddy water. “It’s pretty wet around here this time of year,” he said. No kidding. I’d originally planned to put a clear plastic bag around the urn, then place it in the nice white drawstring sack that it had come with. Most people don’t wrap burial urns in anything or use a “vault” to keep it protected for a time. Who’s ever going to dig it up? I simply wanted to make the process more genteel, but I’d been counting on dry dirt and wanted to reverse the order: white cloth sack on first, and then the plastic bag taped shut as best I could. Adjusting my expectations, I told the digger (Dennis Bean) what I was up to, adding that “It really doesn’t matter, but…”

“It doesn’t matter,” he agreed, and went off to sit inside his truck until I waved him back. The privacy was welcome. I could see him looking at his phone.

The day was cold and gray, the wind was blowing hard. I got my wrapping done and thought about the things inside: a heavy plastic bag with all the ashes—more like talcum powder dust with tiny chips of bone—a New Mexico-designed watch I’d given Kathy on her birthday when we first arrived in Taos, several of her favorite necklaces, a picture of a hummingbird that she identified with, and a note I wrote the night before. A note. Just think of that. The very idea wrecks me all over again. My darlin’ Kathy, sweetheart for all time. 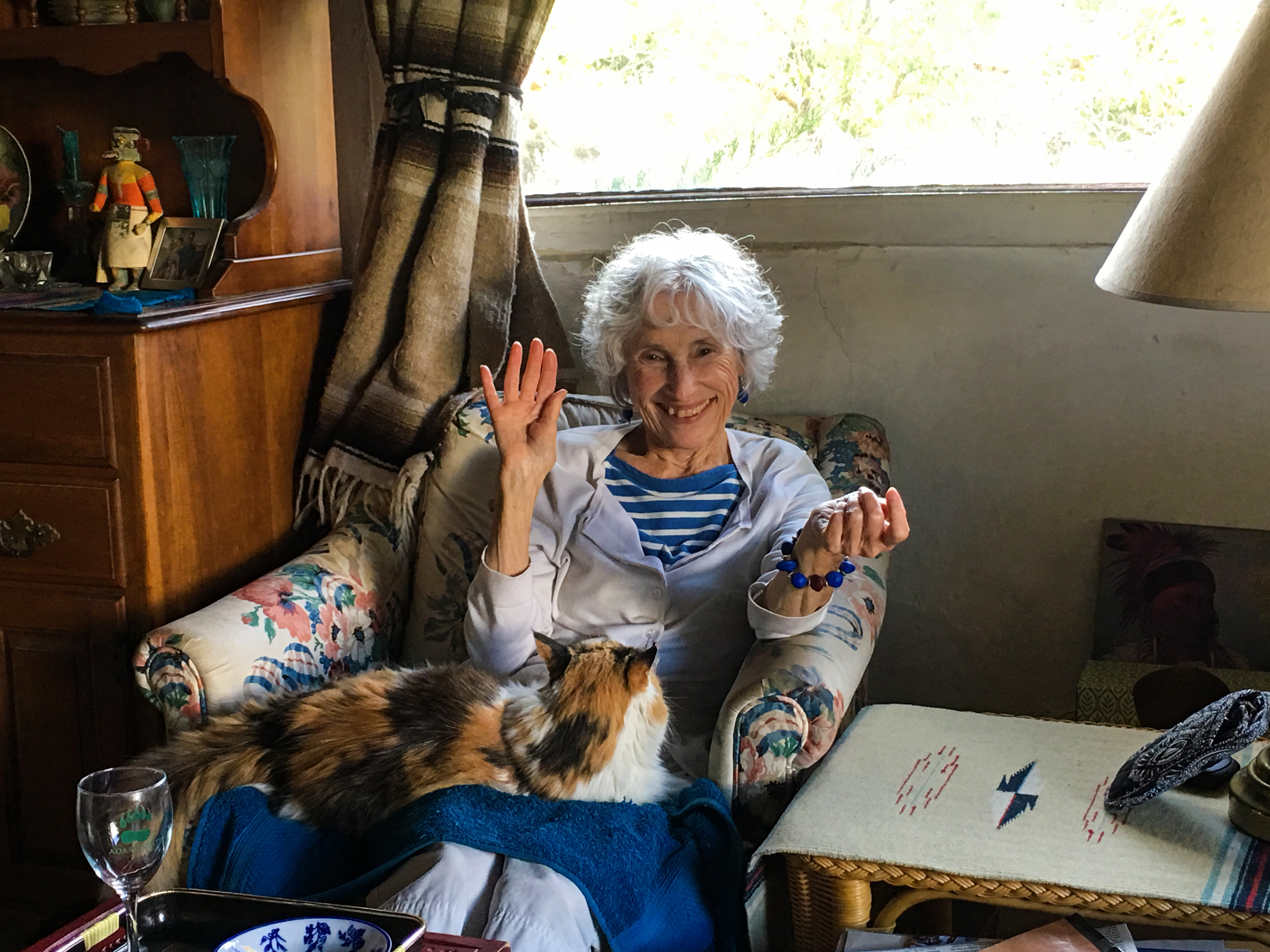 Over the months I’d been buying yellow roses at the supermarket and saving the dried blossoms in a gallon bag. I always bought her yellow roses because I liked the “Yellow Rose of Texas” and the lyrics. I was born in Texas, too. Although the song addresses a mulatto girl or maybe even because it does, the flowers were a custom with us. Fortunately I had the bag of blossoms with me and crushed enough of them into the hole to cover the surface of the muddy water, so that my last sight of the now more crudely wrapped urn would be it resting in a sea of faded yellow petals. I never even thought to take a picture. Is anyone surprised?

Then I waved to Dennis. He went right for the wheelbarrow and lifted the handles. I was barely able to grab a handful of wet dirt to toss in for myself and watched the urn get covered up. It fell a little sideways, but you know, it doesn’t matter. The symbolism is the thing, the ritual of physical release. It was also painful, and the digger seemed to speed up as he stomped the dirt down with his heavy boots, replaced the sod, and rolled his wheelbarrow away. Suddenly the stone was more important. Something that would last a while, a statement that Kathy really did exist and her life mattered, that we were married 40 years and loved each other madly. That was what I wanted and I got it. I know she likes it, too. 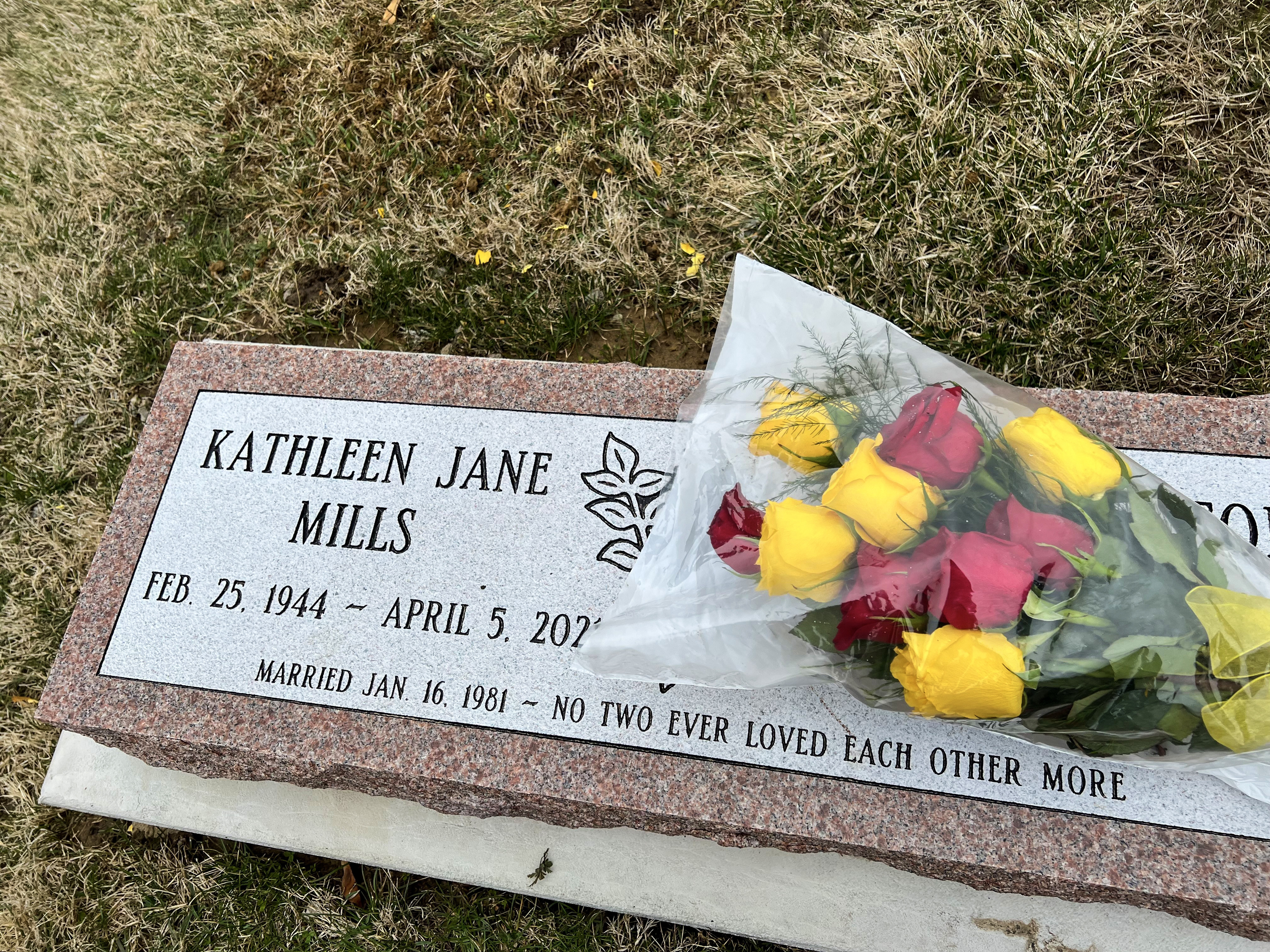 I paid Dennis (who slipped right away) and stayed a while despite the weather, falling apart in grand style, yelling at the wind and calling out her name. This would never have happened anywhere in public and I’m grateful Kathy’s family and Keota granted me the privacy. Much like when she died, the two of us completely alone, the most intimate experience of my life. No outbursts then, no crying. I was in some kind of Presence. It would have been like screaming at an angel.

The next morning after checking out of the Belva Deer Inn [sic] in Sigourney, a decent place I’ll probably see again, I stopped at the cemetery in Keota one more time. The sun was out but everywhere I stepped was even wetter than before because of rain the previous afternoon. I howled and cried some more and couldn’t leave, rubbing my fingers over her name again and again. I’d stand up to go and have to kneel back down. Finally I walked back to the car, got in, but still felt stuck. She’s there, she’s in the ground, I saw the stone, how do I just go away? You know the little road that circumnavigates the grounds in small town cemeteries? I started the car, drove all the way around from where I’d parked, then drove around again… The second time I stopped and shouted out the window up the hill how much I loved her, that all I ever wanted was to be with her, the only perfect partner for me in the whole damn world, and that I’d be coming back. The high school is very close. I wonder if anybody heard.

I was fucking magnificent. Believe me. 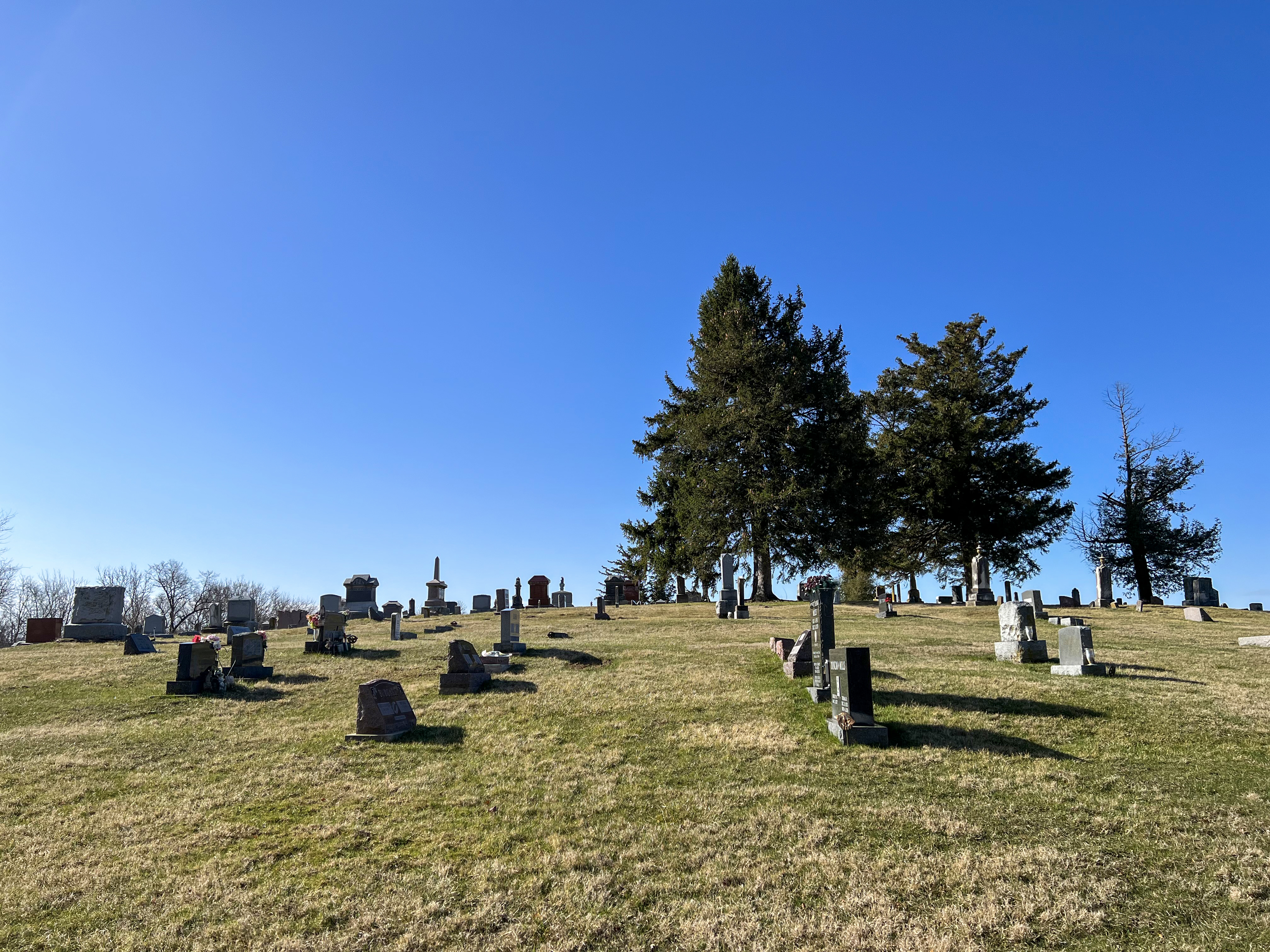 I’ve said before that marrying Kathy was the greatest thing I ever did. She taught me about love, Big Love. I grew up in a dysfunctional environment. It took me years to realize I was weird and she was not. She brought me further down the road to trusting fate and loving myself. Losing her is like having God pull out my plug and walk away. But this is real life for a reason. Nothing ever stops, how could it? We’re designed to take this kind of loss. Some still don’t and die of broken hearts, a thing that really happens. I came close. The next year will be critical.

In Part Two I’ll fill in more blanks and tell some funny stories. Here for example is what you see immediately before entering the Keota Cemetery. Back soon. 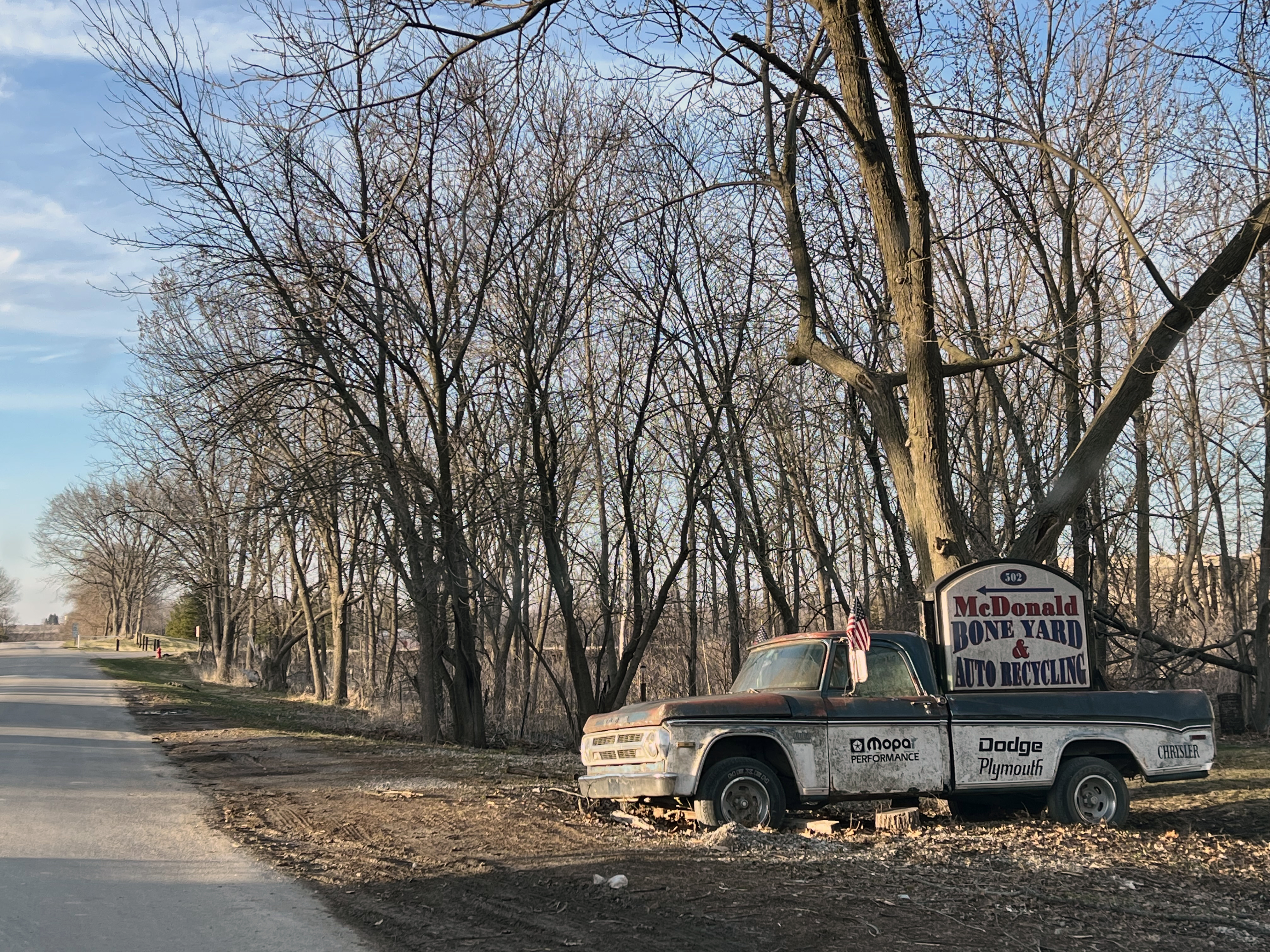