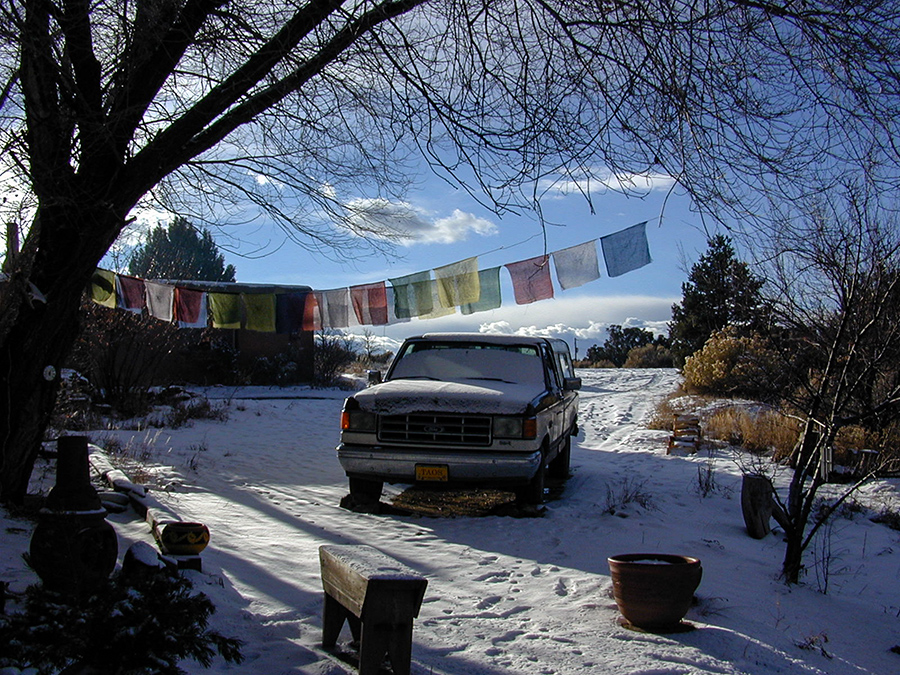 A JHF classic! Originally published as “Pall of Flame” on 11/24/2003. Hard to read, even now that everyone is dead. The bitterness, the deprivation, oy. This was me, though, 16.5 years ago, when I lived here by myself. Can’t believe we haven’t moved yet. Where’s the intervention?

It’s 19 degrees at noon here in el Norte, requiring steady work to guard against the chill.

All morning long I’ve fed the fires, learning in the meantime that the mighty stack of wood outside won’t last till Christmas if this weather settles in. All I know is that it’s cold and awfully dry. Yesterday about this time the cold front rumbled in on 50 mph gusts and blew my trash can down the hill. I even took the feeder down, because it swung so much and spilled out all the seeds. I took a walk just as the snow began to blow (not fall), and that was plenty fun. The flakes were thick and blotted out the sky, but flying powder doesn’t stick to anything. The tiny drifts that gathered in the folds of my jacket quickly fell off or evaporated, leaving not a trace of dampness.

Right before the weather changed, I took a phone call from a trailer park in Tucson: “I thought you’d cut me out of your will!” the old woman exclaimed, projecting, as cold wet toads crawled down my back. Mothers always get another chance—it’s built into the system—so I told her of the progress I was making in my work and how I’d networked with the pros and gained an ally and a friend. Somewhere in a parallel universe I’ve learned to visit when I have to, congratulations followed with a smile. In this one though, she asked if I’d applied for food stamps or signed up for welfare yet, but I said it never crossed my mind. She also told me not to write about myself, which is of course precisely what I need to do.

Ironically, a few days earlier I’d already been reflecting once again about the family I come from. Some years before, my aunt had given me a dusty heap of family relics from Maryland for safekeeping. A few months ago I retrieved some of these items, books and knick-knacks mostly, intending to have another look and see if there was anything of value and no obvious family connection that I could sell. Would that there were! In dollar terms, the exercise was DOA, but just handling the stuff pulled up more than merely what was there.

As I opened packets of old letters tied together with scraps of thread—no ribbons or fresh string if cast-off bits would do—I thought about the way my now-dead uncle used to hover years ago, afraid the boy would get away with something valuable, whenever my grandmother allowed me to take some trinket from the attic. Later, when Granny was in the nursing home, he sold everything I’d ever really wanted out of her house to pay the bills. She was 99 and then some, and barely lived to be 100, so her savings would have easily sufficed. That was cash, however, and therefore sacrosanct. My grandfather’s roll-top B&O railroad desk I’d spent years playing with as a boy was not. It and every other thing I would have hung onto forever simply vanished, sold or auctioned off without a word to anyone, much less my grandmother. The poor woman, still living at the time and harboring the sad illusion she’d be going home when she “recovered,” evidently wasn’t worth consulting. And did I mention that my uncle was a doctor?

I wish the story ended there, but with the Farrs it never does. I was living in the same town at the time, and my only cousin on that side was down in Florida. Before either of us knew what was in the works, my uncle (her father) had struck a deal to sell his mother’s house to strangers, and at a bargain basement price at that. I might have bought the place myself, and my cousin certainly would have in a heartbeat, but she never had the chance.

The memories went scraping and clanging through my mind as I fingered the familiar bits and pieces. I saw nothing in the collection of any monetary value whatsoever—they only kept the junk—and only a few things that might have meaning for my siblings or my nieces and nephews. Then I chanced upon the saddest excuse for a wallet I had ever seen: inside were an 1862 greenback and a packet of “Clergyman’s Half-Fare Permit” cards from the West Virginia & Pittsburgh Railroad, dated 1899. Now this was interesting…

The Civil War Union currency was marked “Five Dollars, Government Bank” and I wondered if I’d stumbled on a fortune. Five minutes of Internet research showed that although Lincoln had had these printed by the train-load, the bill was still redeemable — at face value. Adjusted for inflation, I might have had a little something, but “face value” meant an unknown relative had seen to it that I would stand there, 141 years later, with a worthless piece of paper in my hand. I had to laugh at such a perfect symbol, so much like the ones I knew in all their witless self-importance. Something brayed in triumph deep inside my bones. I shuddered briefly, then shook it off. It had to have been that gene, the old one that marked the empathy quotient of a stone. But surely I was different: all those drugs, food additives, and cosmic rays—my DNA was damaged, mutated or corrupted. It had to be, I couldn’t be like them, or I would need to beat my brains out with a wrench.

Maybe the proof was right in front of me. The half-fare cards! I picked one up and held it to the light. There on the back it read, “NO STOP-OVER allowed on Clergyman’s Tickets.” Oh please. And then I pictured him, my great-grandfather, riding through the night from Pittsburgh to Parsons, WV all alone and cold in the back of the car. No chance to stop and stretch his heels, have a good hot meal, or spend the night. (No honey on the side in Elkins, either, unless he met her after preaching when he rode there on his mule.) So why had Granny saved the cards and tucked them in the shabby leather wallet with the folded greenback? Obviously she was proud of how her father got to ride for half the fare, ignominious privilege though it was. Proud of pain as well, I thought. The righteous sting of deprivation and going without.

In the end, as I was closing up the box, I remembered how my aunt had come to visit us that spring of ’99 when we were getting ready for our move out West, brave but terrified, not knowing how we’d get along. I’d always thought she’d help us, take some step to ease the transition, bless our new adventure and share in the excitement. Instead she pulled into the driveway, just off the road from Maine, walzed in through the kitchen door (without knocking) and yelled, “I’ve just become a millionaire!”—referring to her stock portfolio—then headed for the bathroom. Millionaire or not, when you gotta go, you gotta go, and that was all we got.

Sometimes I think a bonfire would be nice, the flames so hot they’d turn the bones and books and memories to fine gray ash. Out here it’s easy to imagine how the wind would come and blow the dust away, so dry and cold that not a bit would stick.