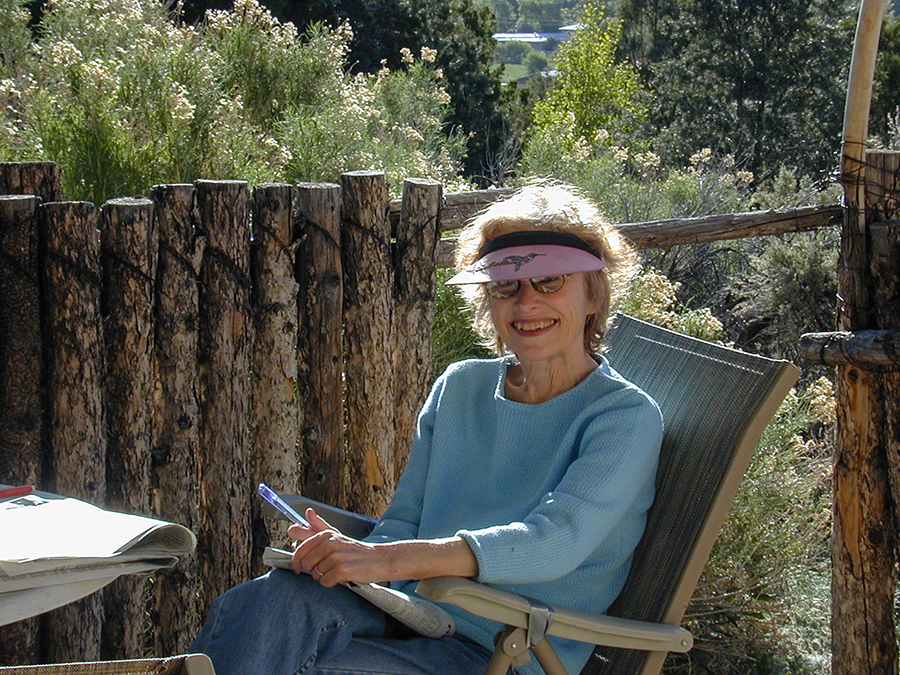 A JHF classic from June 7, 2004. My wife was living in Dubuque, IA taking care of her mother and teaching music. I wrote this after a visit. We were only able to get together several times a year back then.

“What do black widows look like?” asked the special guest from northeast Iowa.

The spider I found when entering the bedroom wasn’t one of those, but I crushed it anyway. You never know, and besides, it wouldn’t leave. (I usually let them be except with bare feet or bathtubs.) “That’s not a black widow. There is one in the bathroom, though,” I offered helpfully. There was, too, on a little shelf of net that spanned a corner near the floor beside the sink. I’d seen it earlier that evening and knew it had to go.

“What do black widows do?” she asked.

“They can bite. It’s sometimes fatal.”

I don’t know, I’m just crazy. I’d seen the shiny black arachnids before, of course. With these there’s never just the one. But I hadn’t absolutely identified it, though a glance is really all it takes. I probably would have left it there a while at least, and just watched out where I put my feet. But I couldn’t ask her to keep her foot out of the corner, just where she might stand to stretch up and reach for something on the shelf. So I found the web and peered close with my flashlight: a black widow, all right. I doused it with some Wal-Mart Windex, and it staggered back behind the boards that line the wall. “I think I got it,” I shouted.” An hour later it was back and perky as hell, so I flattened it with a fly-swatter.

Great big clattering cold darkness. All my bones are turned to soup. The only refuge is a night of sleep, dark within dark. Deep diving darkness, falling, dissolution. What is true for now, and what will be? I try to tell her what I am, and she tells me what I’ve done. We walk the line with great alertness, and something different opens up.

More surprises at the airport. The tanned face in the mirror was calm and looked like me. From somewhere I had fetched a lack of questions and I liked the feel. I passed my hands by half a dozen automatic sinks before one sprayed, then joined her in a different place. There was artwork on the walls, and we looked at two: a sculpture of a Southwestern singlewide and a painting of pioneer family looking out over an unseen New Mexico. There were rifles stacked against the wagon and a husband looking out across the plain, but the littlest girl was picking flowers in the foreground, and that’s what drew the eyes.

Something was both new and almost normal, like a younger parallel dimension. I watched her re-fasten her silver earrings on the other side of the security barrier, then wave and disappear.

Before I left the terminal, I lingered in a gift shop whose plastic Chinese flying pig was low on juice and flapped but didn’t fly. A nearby postcard caught my eye, so I bought two.

I walked back to where I’d parked and rolled the windows down the way I like them: passenger side one-half, mine all the way, vent windows open. I had a drink of lemonade and a slug of Cuervo from a flask. Two dollars and three minutes later, I was on the freeway heading north. It was almost 100 degrees in Albuquerque but dry as yesterday’s toast, and nothing stuck. The wind was at my back, the motor hummed. I floated through town at 65, norteño accordion pumping through the FM turned up all the way. A large flat cloud put most of 1-25 North in shade until I pulled out into open country on the way to Santa Fe. I knew the temperature, but I wasn’t hot. Clouds and sun and sky and mountains did a dance together in my truck.

When I pulled into my driveway, the thermometer on the big elm tree read 75 degrees. Inside the thick adobe walls, the living room was 66. I had a snack, then decided that the light was too delicious to pass up and went outside to take a hike.

The mesa was a glory of warm evening air and yellow-pink, a living room for the gods, and there were pictures in the sky. I wasn’t the only one outdoors, either. A pair of ravens having too much fun to fly in a direct line corkscrewed slowly up the canyon. A young jackrabbit saw me and pretended to hide. When I heard coyotes moving closer as the light began to fade, I held a meeting with myself:

“What if you round a bend and find you’re in the middle of the pack?”

“Who cares, they won’t come after me.”

“Most likely not, but what if they did?”

The answer was so obvious and true, I couldn’t help but laugh. I almost wanted it to happen, to feel my boot thudding into ribs and skulls. If my life were in danger, I’d give it my all, I would, without a question or a pause, and hope I got the most of every second. I looked around in all directions. I was getting most of what I wanted, and I knew the rest was in the bag.