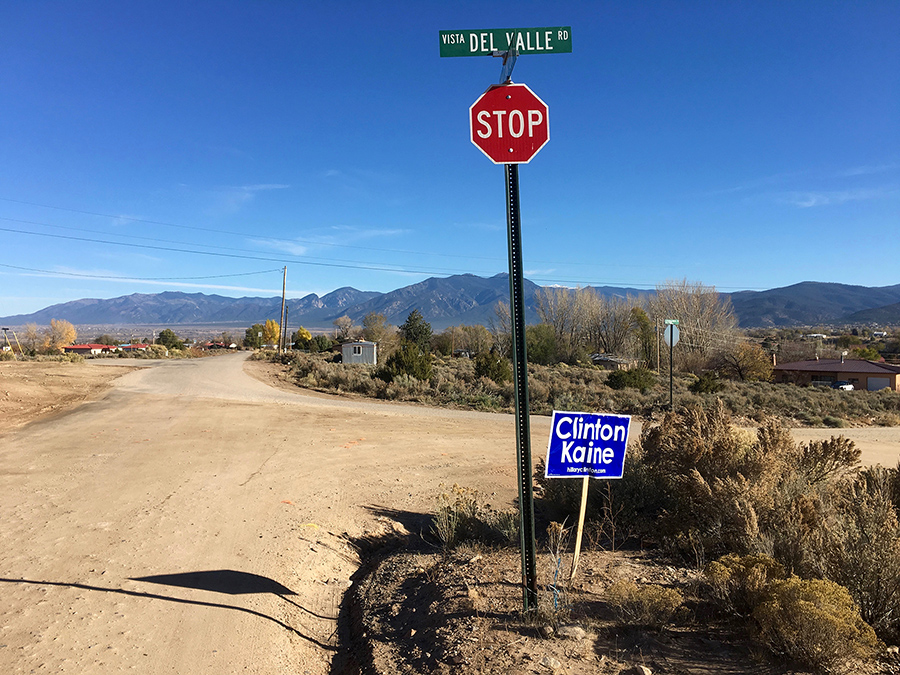 About two hundred yards from where we voted, on the way back home

This year has been rough for me, to say the least, especially the last few weeks. Today was different, though. My wife was already up. I got my ass out of bed and we walked to the polling place past barking dogs, chickens, sheep and goats, dead cars, mud puddles and all. It’s in a room at the Llano Quemado Community Center and the process is always a hoot. When we get there, the abuelitas take our names, mark them off on a good old paper voting roll, and hand us the ballots. Usually we’re the only Anglos in the room, just like we were today: voters numbers 28 and 29, no lines, of course. I waited until I saw the machine had tabulated my ballot, told the lady, “Bueno!” and she grinned. It’s all so quiet and intimate, they even tell us goodbye and thank you on the way out. Now that’s New Mexico, and also the best thing about this neighborhood.

I’ll miss that when we’re gone. And no, I can’t say when that will be. We’re holding our own for the moment because God loves us so much. In fact, he’s given northern New Mexico the warmest, driest October on record. I still haven’t built a fire this season, whereas I’d usually be a full month into heating with wood by now. The romance has gone out of that activity, by the way. It’s just too much goddamn work and terrible uncertainty. I love a fire, but the time has come for central heat. I can’t believe we’ve lived this long without it, frankly. I also can’t believe the pack rats got inside the washing machine again, or that when it rained a couple of days ago, the roof leaked over the end of the bathroom where we hang our clothes. I caught a whiff of “dead thing,” too, probably a gopher on the other side of the bedroom wall in the abandoned apartment next door. Turns out God is quite the trickster!

The worst thing the Almighty did recently was have one of our neighbors attempt an amateur “fix” for the cratered dirt road. The thing has gotten so outrageously bad, my wood guy in his big tough truck complained. Anyway, the neighbor scraped a load of dirt—not gravel!—together and spread it over the holes. That did make for smooth though dusty passage, but I knew the next rain would turn it into gumbo. Which it did. The resulting bog is horrible and sent me into a soul-maiming fit over my apparent inability to make an instant million dollars and find us a better home. The only part I liked was figuring whom to murder and where to pour the gasoline to burn the house down before I headed for the gorge to jump.

My wife is an amazing partner in these misadventures and says the sanest things. “Just write!” is one of them. As I’ve just done so to the tune of about five hundred words, I’ll leave it here for now and find a blanket I can hide beneath. Take care, godspeed, and don’t read early exit polls.