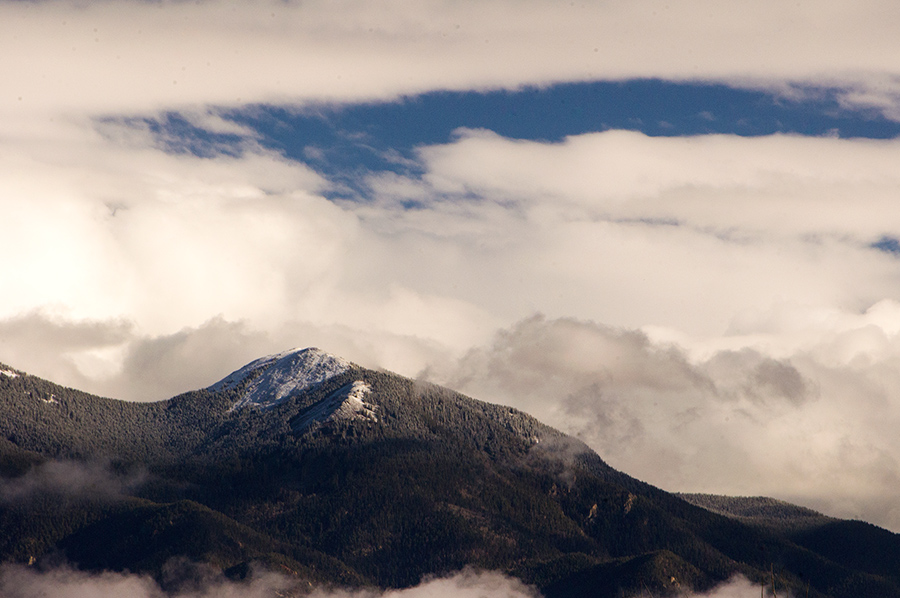 Telephoto image of Taos mountain from our home

The gas wall heater crinks and ticks its little shutdown song. A short time later it will come back with a woomp and heat some more. For this unusual mild, dry autumn, so far that’s been enough. An untouched mound of firewood sits beside the driveway covered by a rotting plastic tarp, waiting for the winter lockdown. I feel like a fifth columnist, rooting for the drought, and keep my true thoughts quiet. The local mantra, offered up if anyone complains about the ice and snow, is, “Well, you know, we need the moisture.” Maybe this time it will never come. I’m always disappointed when it does and everybody cheers.

A week after the election, I’m still afflicted with an aching gut. My moods swing sharply between fierce defiance and existential dread. Our institutions and society have failed us. It is a most extraordinary time. How appropriate that in a few days, the jet stream will drop south and swing the pendulum to bitter cold and howling winds.

The best take I’ve seen so far is here. The article is beautifully written and I hate to summarize, but its three main points are to take the haters at their word, survive, and refuse to normalize what’s coming.* As author Liel Leibovitz concludes:

So forgive me if these next four years I’m not inclined to be smart. When it comes to the task ahead, I’ve no interest in deep dives or shades of grey or mea culpas. Like my grandfather, I’m a simple Jew, and like him, I take danger at face value. When the levers of power are seized by the small hands of hateful men, you work hard, you stand with those who are most vulnerable, and you don’t give up until it’s morning again. The rest is commentary.

For all these days, I’ve thought of little else. Some time ago, however, I wrote an essay entitled “Three Centimeters,” now a chapter in my TAOS SOUL book, that spoke to me last night when I rediscovered it. The title referred to the news that New Mexico had had “bounced” or risen from a major earthquake on the other side of the world. The words were a response to rising ecological concerns and the discovery of a wobble in the rotation of the Earth around its axis. Why, you’d think the planet was alive. I’d already felt an energy or presence in the rocks and trees. Even back in Maryland, the barley and the corn exuded consciousness. The open spaces of the West arouse both overwhelming reverence and fear. There’s “something” there, all right, impossibly alien and ancient, that doesn’t need us…

The quickest way to put a stop to all we’re doing is to have an end with us. It’s no more than we do when biting pests invade the house. We shed no tears for dead mosquitos, after all. If the wobble turns into a sudden jerk, the only tragedy will be in the minds of those who manage to survive. Flies will buzz, scavengers will fatten themselves, and soon green grass will grow again where cities stood. Rivers will flow, and birds will sing. Here and there, eventually, a human child (but not too many) will watch a butterfly and laugh. And if there are no birds or butterflies or children, there will eventually be something else. Somewhere on a fertile hunk of matter orbiting a distant star, a being will dream of what we were, wake up with a start, and then forget. You know you’ve done the same.

“Well, you know, we need the moisture.” Maybe so, or maybe not!

I don’t know if this perspective helps you find a bit of refuge at a deeper level. It does with me until I read the news again. The danger now is very real—most people have no idea—my wife and I still need a home, and I will never stop resisting evil lies and bullshit. Winter is coming on. Do what you need to do and live your truth.

Mine is that I still owe this world, this Mystery, the best I have to give.

* Read Sarah Kendzior and Leah McElrath, follow up on whoever they cite, and scare yourself to death.