Saturday on the Rio 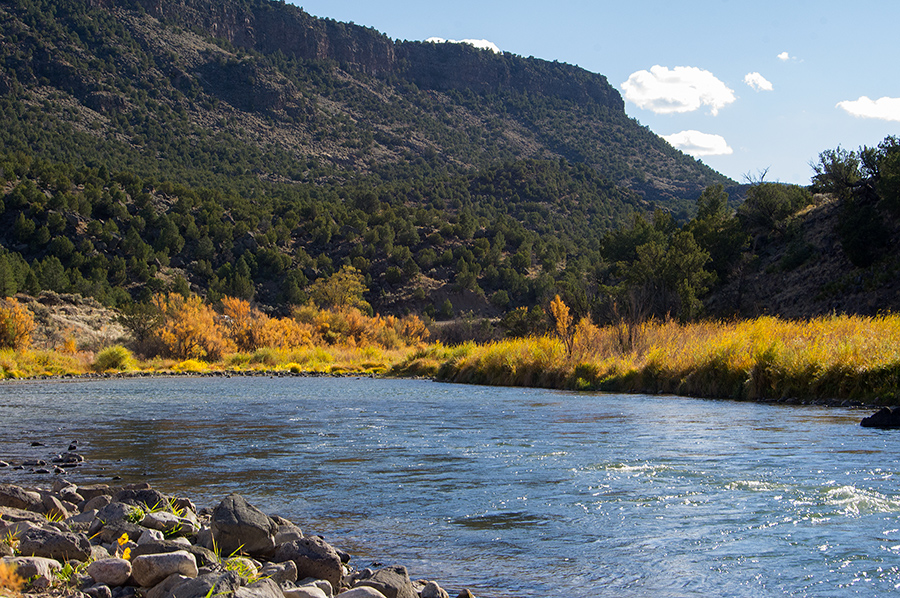 Reflected colors from sky and trees

The river was stunning on a quiet Saturday afternoon. In the absence of any recent run-off, the water was clear, and there was almost no traffic on the road between Pilar and the Taos Junction Bridge. Canada geese and several species of ducks fed constantly in the shallows, where long green banners of aquatic plants waved in the current. For the first time I understood the Rio Grande as a living river, not a ditch.

We needed the opportunity to rest a while in such a beautiful place. Heading down there had been my wife’s suggestion, after an emotionally disabling visit to the accursed storage unit to retrieve her wool skirts and winter pants, neither of which we could locate in the jumble of dusty boxes where we thought she’d stored them. This was preceded by an almost equally disastrous lunch at our favorite northside cafe in Taos. Instead of the usual excellent fare and friendly service in comforting, funky surroundings, the place felt oddly off. A waitress I’d never seen before brought me the wrong cheeseburger, which I didn’t realize until I’d eaten most of it, and the meat was obviously old. At the next table, a darkly tanned mother tapped away at her phone while her two large teenaged sons wrestled loudly and aggressively as they waited for their food. She paid them no mind whatsoever.

I recognized the kind of hands-off parenting one sometimes sees in “hip” communities and tried to avert my eyes. It reminded me of one of the first times we’d gone out to eat in Taos seventeen years ago. In that instance, the customers were sitting outside at tables shaded by large umbrellas. A family seated near us watched impassively while their little girl, barely old enough to walk, crawled underneath our table, then rocked back on her diapered butt and sat there eating gravel. “It’s good for her,” I heard one of them say.

As we drove home down the Paseo through the middle of town, I reflected on the signs. It was hard to say if anything had improved in Taos itself since we arrived at the end of the last millennium. Our favorite eating places had declined or disappeared. Tourists still swarmed the sidewalks past the same old galleries, but the newsstand on the plaza was long gone. Houses cost twice as much, traffic was worse, and we could barely afford to go to a concert. There were more rich retirees than ever, driving spotless SUVs from one event to another like Chicago in the Sangres, while badly tattooed locals drifted in and out of Walmart talking on cheap phones.

All of this was true, and yet it didn’t matter in the short run. The mountains were still there and we had no more cushion left—our turn had to come right here and now.