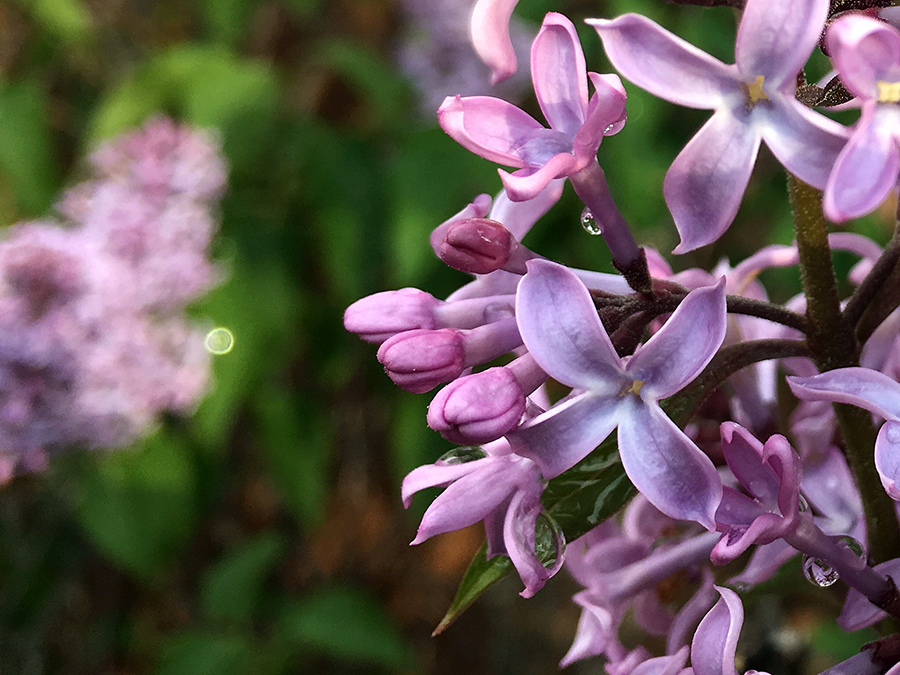 Another iPhone 6s Plus shot, zoomed in tight

When we first met in Maryland, I fell in love so hard. Because I knew how much she liked lilacs, I left a sprig of blossoms pinned beneath the windshield wiper on her ’65 Volkswagen so there could be no doubt. Years later, there were lilac bushes at the first and only house we’ve ever owned, and much more besides, including what we planted: apple trees, grape vines, lillies, irises, roses, cosmos, tulips, daffodils, peonies, crocuses, forsythias, magnolias, English walnuts, and an ancient hollow redbud tree, where every spring, a six-foot blacksnake would appear and eat the eggs of whatever birds tried nesting there.

It’s been sixteen years now in northern New Mexico. The place is full of lilacs. Almost every house along the paved road from our neighborhood down to the highway has blooming lilac bushes. Purple mostly, but here and there a white one. The white lilacs are a symbol, I think. She loves these the most and often mentions them. Today was different, however. Early this evening, just before or after supper but before the sun went down, she stood beside the kitchen window looking at the lilacs by the vacant house next door:

“We had a home once…” she said. “When we have our next home, I want to plant white lilacs. White lilacs, and purple ones, too.”

“Absolutely,” I said, hoping that I understood. “Absolutely. Yes. Of course.”