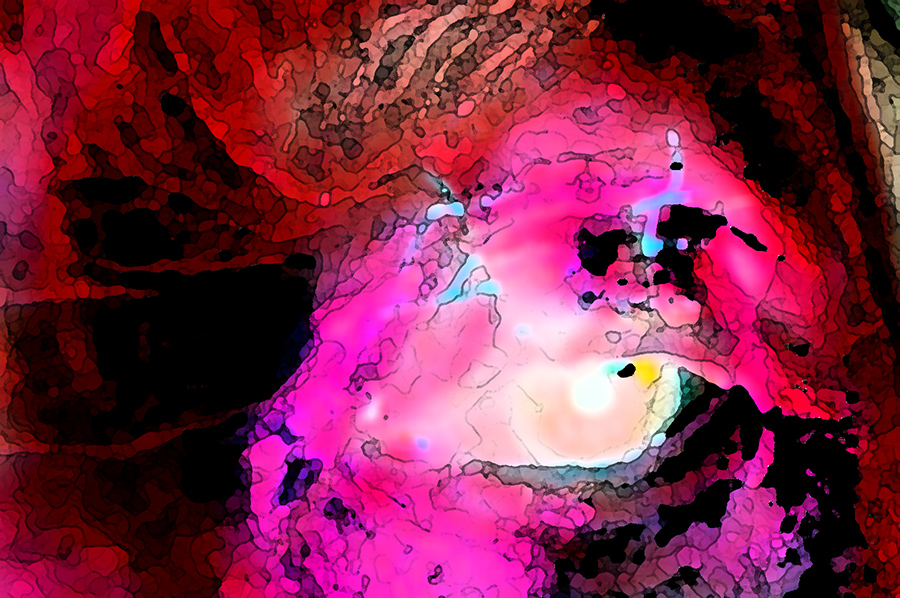 “I look like Frankenstein,” she said, and she was close. The result of her eyelid surgery to remove a small basal cell carcinoma looked pretty gruesome to me the next day when I removed the bandage. She bruises easily, I know, but the swelling and the technicolor blotches set me back. I thought but didn’t say, my God, how does this ever come back together? So of course I took a close-up photo with my iPhone and tried to text it to the doctor in a far-away town. I may be paranoid, but I got spunk.

And what do you know, you can’t do that. It appears to be illegal for doctors to even receive such images from a patient, which makes sense when you think about it, but on the other hand, how helpful. I’m not the only one with spunk, in other words. An act of God occurred and briefly, in a private space, a thing was seen before it vanished in the ether.

“It looks perfect,” he said.

There was more, but that was plenty. Before I go any further, I can report that after forty-eight hours, the outlines of a normal pretty face are evident again. The swelling has gone down, and now the skin is pulling at the sutures. She has little jerks and fits of pain. Morale and stamina are sketchy, but she’s mostly good.

I think I’m a terrible home doctor because I get scared and overcompensate. [Note: she says I’m doing fine.] One of her instructions is to clean around the sutures twice a day with a q-tip and hydrogen peroxide—we can’t have any scabbing or the wound “might begin to separate.” Oh, great. I see much better up close than she does, so this comes down to me. Naturally my q-tip was too wet the first time (no scab, no scab!), and after she’d gone to bed, I worried that I might have gotten a tiny bit inside her eye. No, she didn’t scream or flinch, but a couple of things she did complain about were way down at the bottom of a list of symptoms I googled in the idiot hours when even dogs had ceased to bark.

Which I did, although I couldn’t sleep.

After cranking up the anxiety level by trying not to answer “Why do you want to go buy those?” I headed off to Walgreen’s in the dawn. I scored the drops, we put them in, it didn’t change a thing. Discomfort and some affect on vision is common for a few days after surgery where the eyelid skin gets cut and stitched, duh, due to swelling and more watering of the eye than usual. The business still unhinged me. By then we’d each achieved that level of okay where you can be polite except your stomach hurts, so I over-applied the high-tech vaseline the nurse prescribed and this time did let some ooze into her eye. Good thing I bought those drops, I thought. Brilliant. So evolved. That must be why we both still feel like throwing up.

Last night I felt better for some reason, sitting down to get a start on writing this. A preternatural calm descended for a time, which ought to tell me something. I was even able to dip in and out of the writing to administer to my wife without veering off into awful politics on social media, worrying about the home we haven’t found, or haunting the refrigerator. I infer there’s something there, and Jesus, look at where we get to live.