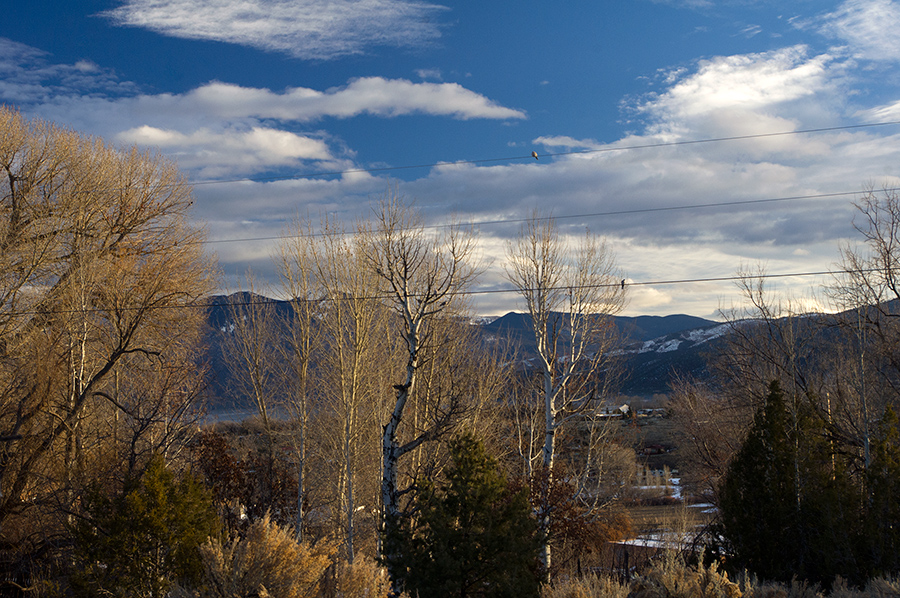 This used to be a barren hillside. Around 1961 or ’62—think proto-hippie, hard-core, early lefty-artsy-sure-I’ll-try-some days when you could almost buy an old adobe with the money on your hip—a tiny enclave did arise. At one time or another, neighborhood residents included a well-known photographer, Krishnamurti’s ex-girfriend, a couple of jazz musicians, Jerry Garcia’s ex-girlfriend, a writer and theater critic, a painter, a potter, professional drunks, and a one-time neighbor of Allen Ginsburg and Gary Snyder who used to run hashish from Turkey to Amsterdam with a trick car and guns. (Later Dennis Hopper showed up and lived for a time in a house in this shot.) The hillside stayed barren until somewhere in this time frame a few of these folks planted aspens, cottonwoods, and apple trees along the acequia. One of them, the largest aspen I’ve ever seen, died quite some time ago but stood until the power company cut it down.

Few signs of this cultural history remain. If you knew where to look and had a guide like I did, you might hear, “So-and-so built that walkway with rocks from the mountain,” or “Then he got high and tried to run over my dog,” or “That’s where we played trumpet and drums while everyone danced…” She lives high up in the canyon now but gets her mail here because the house is illegal—not up to code, no permits, no law.

There’s a small pond with muskrats. No toilet. That’s all.