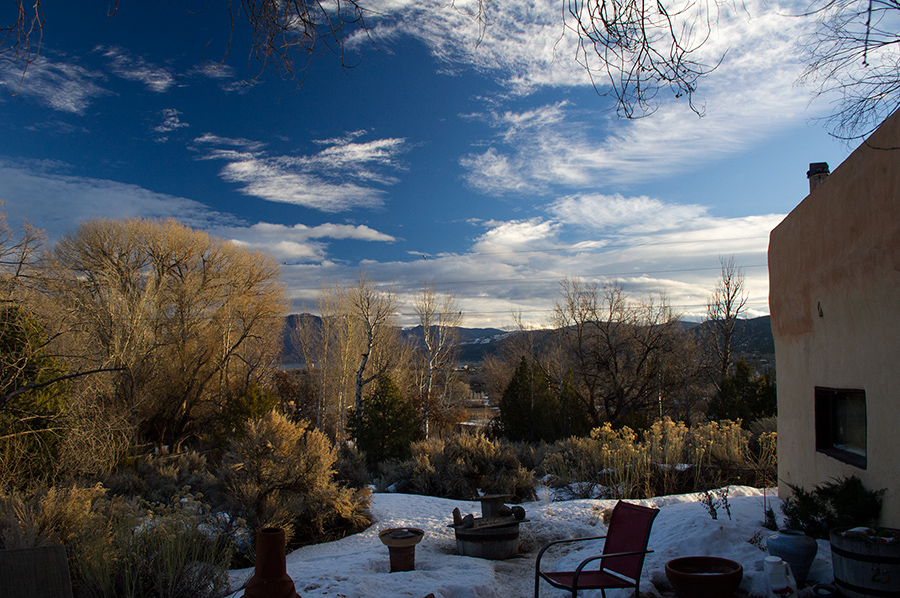 Eat it up, you myth addicts. It’s amazing how this can grab you, even as you realize your cargo pants are a darker shade of khaki now because it’s too damn hard to even think about the laundry when you have to weight the hose down in the kitchen sink and dry stuff by the wood stove. But never mind: “It’s Taos,” as they say around here to explain the latest degradation. Like the guy who tried to kill himself last year by eating prairie dog poison and started belching poison gas. (That works, by the way.) They’re right, of course, but do I ever hate it when they are. I shouldn’t, though. I’ll bet in L.A. people say, “Hey man, it’s just L.A.” I think I would.

The snow you see is how it looked a couple of days ago. Today we had a lovely blizzard for several hours that dumped about a foot on top of that. There was less on the flatter surfaces. I used to think this made my struggles less legitimate. Way to chop your head off, bro. But I had a plan to drive the car out this time. All I had to do was make a path to the top of the hill and shovel about three acres of snow so we could back out into the road and get stuck there. I said “out,” not how far. Anyway, I did that, and we’ll see tomorrow.

It was bizarre this morning, however. The sky was mostly murky with just a few odd flakes fluttering down, so we left to run some errands. Oh were we ever slick. As we reached the end of the dirt road where a driver coming down from Miranda Canyon miraculously halted at the usually invisible Stop Sign of Doom, I realized half the sky was pure gray-white and I could see the curling tendrils on the leading edge of a goddamn snow cloud rolling up the mesa, on the ground, at thirty miles an hour. “See that? We’re gonna get a little snow!” I said. Half a mile later I could see bare trees bending in the wind and then the whiteout. We turned around before the mini-mart and didn’t even try to get a paper so my honey could do the crossword puzzle while we got snowed in.