Jump Outside My Body and Fly 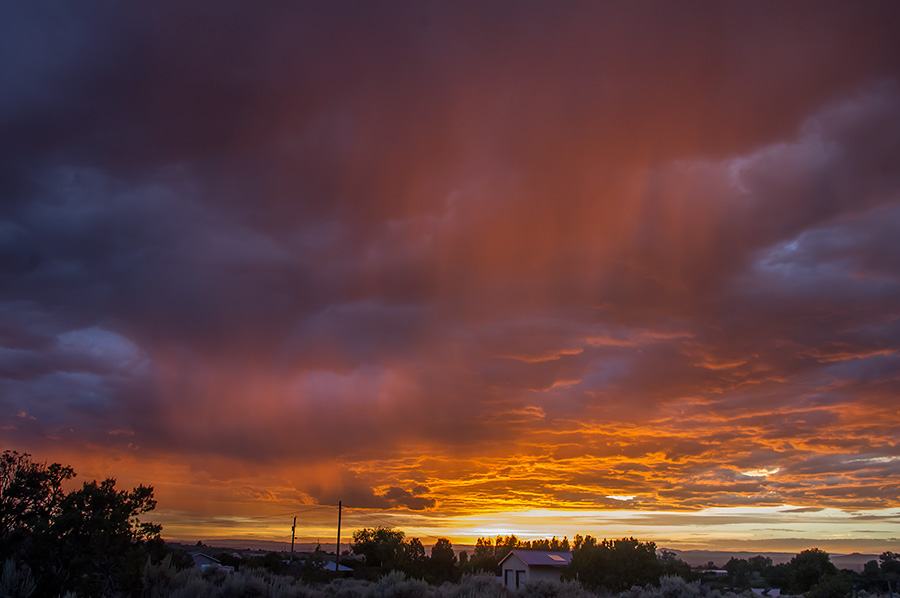 Glowing virga at sunset is a mighty fine thing »Buy This Photo!«

I’ve only been outside my body once that I know of, and that was by accident. It happened around 3:00 a.m. when I was fast asleep at a sleazy motel in Fayetteville, Arkansas on a cold and rainy night. No really, that’s what it was. I was living in Austin, Texas at the time (early ’70s), so this must have had to do with selling my share of the 170 acres in Madison County and taking a last look or whatever. Plenty of stress to spare, in other words. That helps. All I can tell you is that at one point I realized I was simultaneously also standing naked outside the door to my room in the rain, fully aware that my body was back in the bed. To this day I can still see the red motel sign and the lights in the parking lot, glistening and wet, and have no idea how I got put back together. Maybe there’s a rubber band or something.

It might run in the family. I remember that our father, who didn’t believe a word of this stuff, was profoundly shocked during one of his chemo sessions in the last spring of his life when he found himself on the floor under the cot he was lying on at the very same time—over and under, as it were. It shook him to the core, never mind the obvious message that he had nothing to fear from death. My brother Rob told me once about floating up to the ceiling while his body was in the dentist’s chair. As for poor recently departed William G., our brother Bill, he may never have been in his body at all, which might explain a few things. Of my two sisters, Teresa who’s dead would have been totally cool with leaving her body, and in fact she did! Mary the nurse hasn’t weighed in on this yet and may be too grounded in gore (so to speak) to go playing with astral projections. She’s hip, though, so maybe.

The reason this came up is the sunset last night. You can’t see it in the photo above, but there was this perfectly round hole in the glowing overcast with clear sky above. I wanted to shoot through the hole and felt like I could—it was the strongest sensation and seemed so damn easy! I’d just make a big circle, there over the sunset, then come on back down through the hole and back into my body. No one would know if I did the thing fast enough, right? Leave the meat in the road, zip out and back in, but I was too scared and backed off. It was like turning away from a high-diving board, yet the board’s always there.

I did take a few jumps. Hops, really, on the balls of my feet, like a bird with new feathers and too many thoughts.