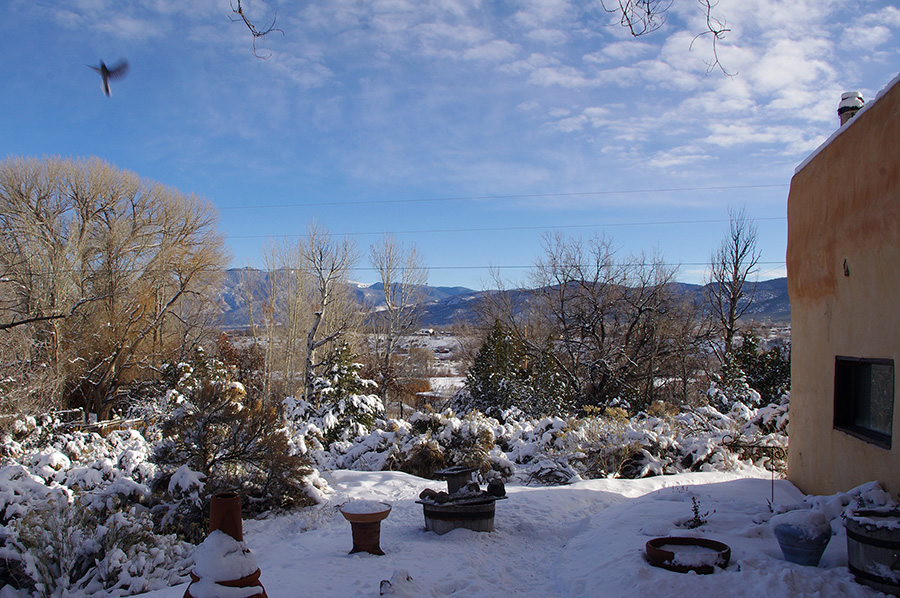 I worry too much. No, really. [ducks] What’s new is that I realized that worrying is pretty much all I do.

I worry in the bathtub. I worry in my sleep. And mostly, I worry about things that haven’t happened yet, which seems to be the essence of it. Worry, worry, worry, worry. Right now I’m worried about whether there will be too much snow or mud for my wood guy to deliver when we run out about ten days from now. I’ve been very worried about finding another affordable place to live that doesn’t make me want to shoot myself. I was even worried about the snow until it stopped, and look, the sun is shining. (This is New Mexico, you idiot, the sun shines all the time.)

For whatever reasons, I’ve always been this way. I’m lucky that I’m still alive, considering the strain that places on your body and your mind. I could worry about dying, too, but my late sister told me dying was “perfectly safe,” and I have no doubt she made it. Wherever she is now, I know Teresa’s having fun! And do you know why? Because she never worried about a thing. She had the capacity to worry and sometimes got depressed, but she knew how to refocus her attention on things that made her smile.

She was an amazing artist but never had much money. The circumstances of her life, however, never seemed to get her down. She once lived at the top of a steep hill in Austin, a couple of blocks up from a busy street below. One typical warm, sunny day a neighbor found her sitting by the curb outside her apartment with a fishing rod and asked what she was doing. “Cat fishing!” she replied, probably hoping someone would stop and ask her that. What she’d done was attach a weight and a piece of ribbon to her fishing line. She was casting down the hill and slowly retrieving the “lure” in hopes of attracting neighborhood cats, and of course it worked.

Another time that I remember, a bunch of us were having barbecued shrimp and beer at a table set up in the front yard at this same location. Present were Teresa and her boyfriend (my future brother-in-law), another couple, my wife and me, and maybe someone else. My wife and I had just completed the next-to-the-last leg of an epic summer journey that had taken us and Lady the Wonder Dog (a white German shepherd) from Maryland to Iowa and then all the way down to San Miguel de Allende and back in her ’65 Volkswagen Beetle. They don’t make road trips like that any more, and if you never did, you’re out of luck. Too bad!

Since we’d just returned from south of the border, everyone was drinking Tecate in those nifty red aluminum cans. After a while, there was quite a group of empties in the center of the table. I don’t know how it happened, but at one point someone was talking about the litter problem on the highways. Suddenly Teresa got this funny glint in her eye and threw her empty beer can over her head onto the lawn! This was so hilarious, it quickly spread, and soon everybody was throwing beer cans in the air and even paper plates. I’m sure the dog was barking, too. The yard was quickly filled with red Tecate cans, and some rolled into the street. We picked them up, of course, but to this day, it was one of the funniest things I ever experienced.

Having only just now seen how many years I’ve made more difficult, what did all the worrying ever get me, anyway? I’m still here, regardless, and could have had a better time along the way. I didn’t set out to write about my sister, either, but this is how it went.