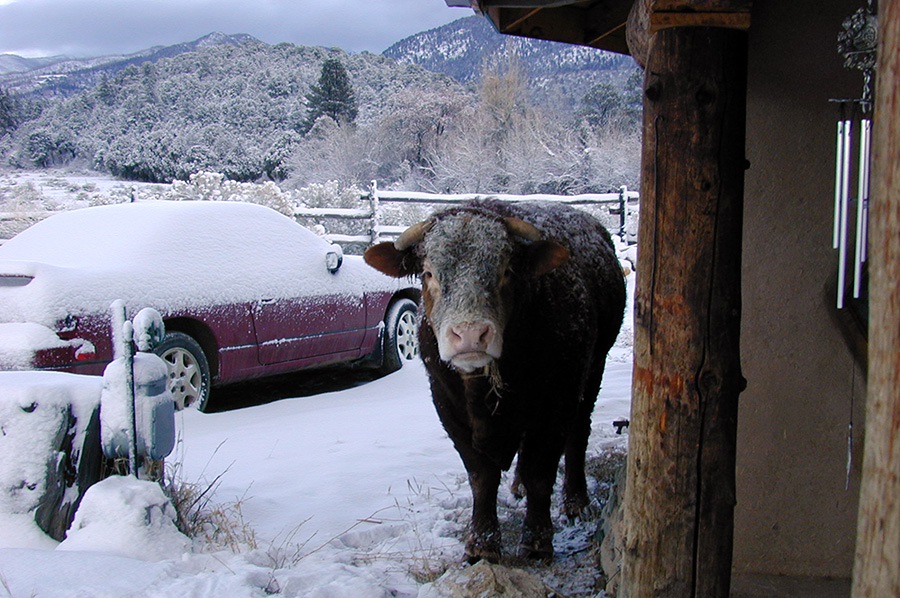 Only took the one shot here, no need to stick around

This photo taken early in the morning on February 25, 2001 in San Cristobal, New Mexico, was the basis for the cover of the first ebook version of Buffalo Lights, the amazing story of jumping headfirst off a cliff. No, wait, it’s about our moving to New Mexico! (Haha, just kidding, it hasn’t killed us yet.) By now you’re also thinking, dammit John, that ain’t no buffalo. No, but it’s a bull with all his parts outside the front door after a snowstorm at eight thousand feet. I’d run outside naked from the back door with my slippers on, all jacked up to get a shot of what I thought was a goddamn bear.

The summer before, my wife had seen one in the front yard. I knew this because she yelled, “There’s a bear! and slammed the heavy wooden door shut. When I jumped up with my camera, she threw herself against the door with outstretched arms and shouted, “NO!” I would have argued, but the pose was so melodramatic, like in a silent movie, and partly charmed me. I was also pissed, but figured there would be another bear, and damned if she would stop me. There wasn’t, as it turned out. But on the morning of the 25th, her very birthday if the truth be known, my wife was in the tiny room she used for an office and a closet and saw the weirdest thing: something completely covered a window from outside! I leaped out of bed to investigate. It was dark reddish-brown. It looked like fur. And it was moving…

“It’s a bear!” I hissed, and went straight for the door!

Oops, something on my feet. Oops, my camera. Oops, my bathrobe—no, that’s in the bathroom, no time! I opened the door—yow it was cold—ran around the house in the opposite direction I’d seen the fur slide, and came face to face with this fellow here. The rest is history, I guess, and you can read about it in the book: Chapter 21, “Bull o’ the Blizzard.” Seriously.

That was quite a place to live, up there in the valley. The history of what we called the “adobe cottage” was as strange and dark as any of it around here. Back in the ’70s, a crazy hippie lady and her local boyfriend built the house. She sold it later, of course, along with the meadow and a creek that ran through it, and moved on but then came back. Almost thirty years later, she and some ungodly loser were living there again, renting from the owner at the time, as we were in a bigger place next door. She was determined to get her old home back by some kind of voodoo and used to sit in the middle of the meadow, meditating on it. It was the spookiest goddamn thing.

We moved back in when those two left or got evicted, after the landlady burned sage and beat a drum to chase away the devil vibes. (We’d lived there when we first arrived, before them. At least I think we did. The sequence of the moving back and forth eludes me now, and please don’t make me think about it.) There was a resident rat so big, he scared the cat. I used to sit at my computer with a rifle in my lap. He dragged a whole geranium plant under the bed one night before my very eyes! That’s in the book as well.

We didn’t know what the hell we were doing. As far as plans and hearts and money go, remember that scene from Monty Python and the Holy Grail where the Black Knight ends up with first one arm, then another, and finally both legs cut off and blood spurting all over the place but still attempts to fight? That’s kind of what it was like. I don’t think we ever recovered, exactly, but you open up in other ways. Anyway, the night is young. The night is always young. At least it better be.

This ought to be a screenplay. Can I get a witness? [tap-tap] Is this thing on?

Previous post: I Think I Know What This Is