Ripped Out of the Sky 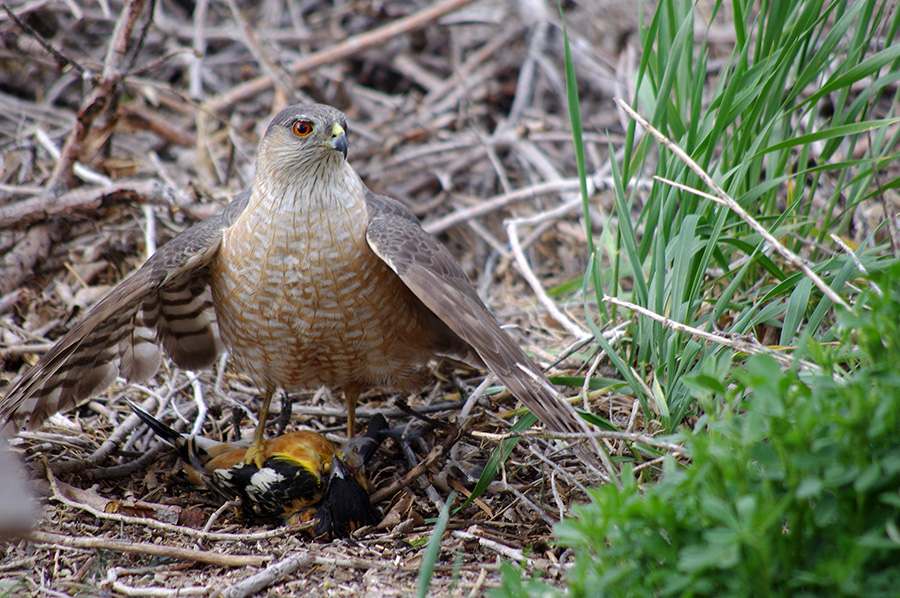 If he grabs you, better keep real still

A loud whomp against the window glass usually means a bird, so I got up to look outside. The trick is to find the unconscious feathered missile before the cat does and move it to a safe place; if its neck isn’t broken, the victim usually revives and flies away. That wasn’t the case with this black-headed grosbeak, however.

The Cooper’s hawk stood there like that for a good long minute. Every time the grosbeak twitched, the hawk gave a little jump and tightened its grip. Twitch, crunch. Twitch, crunch. Before long, pretty much everything was broken. When I pushed the screen door open a little bit more to get a better angle, the hawk took off and flew away, carrying the prey like it weighed nothing.

High up in the mountain valley of San Cristobal thirty minutes north of here, I used to feed the birds by putting sunflower seeds out on rocks and stumps behind the house. This always attracted lots of jays and magpies, and of course the hawks. Sometimes there’d be two or three raptors attacking at the same time! Different sized hawks, I didn’t know what any of them were. The birds on the ground would keep an eye on the hunters while they ate and hop out of the way at the last second. It looked like they were playing a game, and I never saw one get caught. Sometimes a hawk would give up and rest on a fence post a few yards away just to stare at the jays.

This is the shadow side of feeding the birds. I don’t like to see them die, but on the other hand it is a thrill to see the raptors. They usually miss, anyway, like the peregrine falcon that swooped right over my head as I sat out back having a drink a few days ago. But maybe that one was just passing through instead of chasing collared doves.

That Cooper’s hawk, though, it radiated Death. Implacable and direct. So powerful, too, and bigger than you think: three flaps and it was out of sight. I felt like I was in the presence of a feathered god.