Remember Who You Are 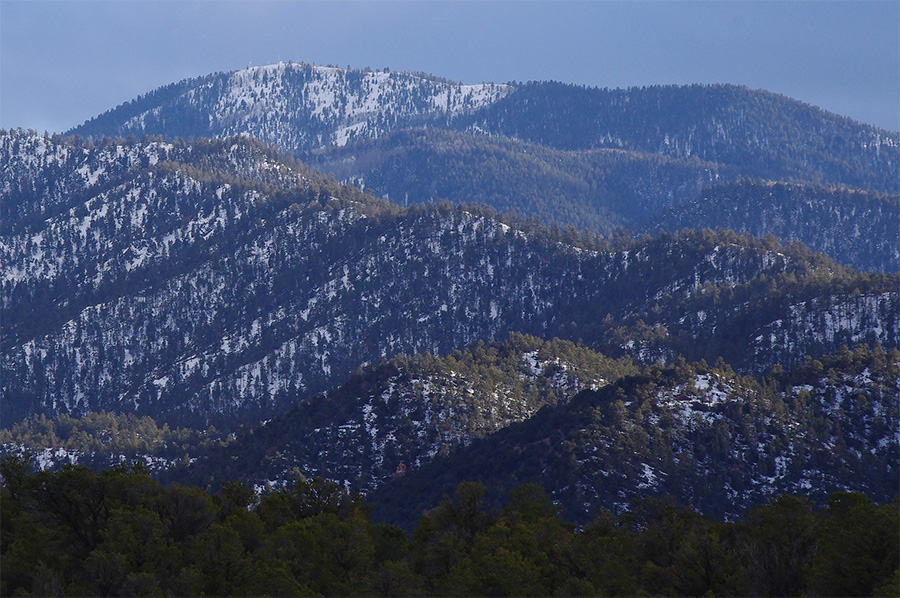 I have a friend who sent me a photograph of light reflecting off a piece of obsidian crystal and wrote, “View deeply, remember who you are.” Now that is very cool. It came precisely at the moment when I needed a reminder.

Today I went hiking on the same trail from which I took the Picuris Peak shot above last week. I didn’t want to go at first, remembering the possible number of Sunday visitors. Then I decided I’d allow myself to wander up and down a few arroyos for once instead of simply charging two miles out and back the way I usually do. This would also get me off the trail, if that was relevant.

These arroyos are full of mystery and surprise. Also rocks. You never saw so many rocks of so many different kinds. That’s probably because a few million years ago, northern New Mexico basically exploded. A piece of the Jemez Mountains ended up in Kansas, believe it or not, after a cataclysmic volcanic blast that created the Valles Caldera. But in today’s arroyos, you walk along below the level of the surrounding countryside, sheltered from the wind, in almost perfect silence. It hardly ever rains here, but looking at the patterns in the clean gold sand, you see it must have not too long ago. Everywhere I walked today in these places, I saw no human footprints.

Instead of following the last arroyo up to where it crossed the trail, I climbed out and headed cross-country, up a hill. By now I know the lay of the land. All I had to do was go all the way up, there, where the sunlight reflecting off the slope was like an invitation, and I’d run into a higher section of the trail, having gained a couple hundred yards as well. Halfway up, I stopped to have a drink of water beside a clump of junipers. Suddenly I heard a soft clonk-clonk, like a single note on a marimba. A second later I realized it sounded just like this mystical art device without the bell.

I stood perfectly still and listened to the sound a few more times. Once it seemed to come from deep inside the juniper grove, then I thought I heard it from behind, or even down the hill a little way. This kind of audio ambiguity isn’t unusual with me, what with my whacked-out hearing, but maybe—like sometimes with my ears—the clonk-clonk wasn’t physical. For it to sound exactly like the pieces of cedar I had hanging from a tree back home was kind of clever, though.

An hour later, I’m back here at the old adobe on the hillside. The sun is pouring down the driveway like a warm spring flood. I’m outside to get some wood for later on. The air feels so nice, I don’t want to go back in but I do, because the chore requires several loads. On the last trip to the woodpile, I stand admiring how the light brings out the color of the 500-year-old piñon. As I bend to load a few pieces in my right arm, holding the wood against my chest, the certainty comes over me that I am being helped.

Never in my life, not once, has such a thing occurred to me.